Fighting the anti-Israel boycott is an honor

Fighting the anti-Israel boycott is an honor

Opposing BDS is a satisfaction in itself. 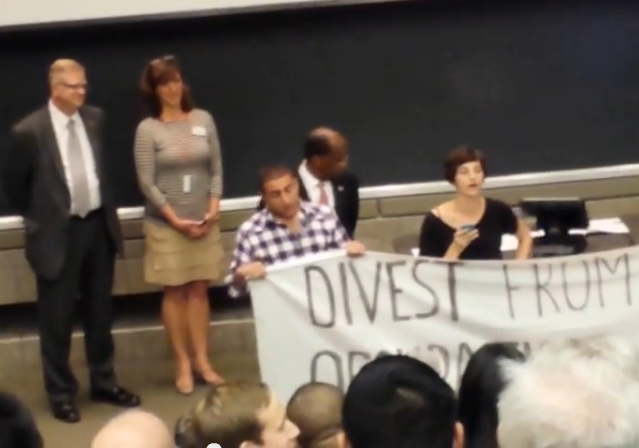 As readers know, Legal Insurrection has devoted much of the past several months to fighting the academic boycott of Israel and Boycott, Divest and Sanctions movement on campus.

We have relatively few resources, and time. We do what we can do.

We helped expose the American Studies Association for the hateful group it has become, an academic pariah which has circled its wagons of BDS friends, but has not seen its boycott call spread.

We’ve covered and brought public attention to floundering campus divestment resolutions, including the collapse at Cornell, thereby puncturing the supposed inevitability of BDS. Our coverage of anti-Israel fury directed at professors and Jewish students at Vassar has served as a wake-up call as to what BDS on campus can become.

What has been most satisfying is to see the pro-Israel students organize and mobilize in the face of these threats. It’s not easy for them. They didn’t ask for it. They would rather be studying.

But they have no choice. The issue has been forced onto them by anti-Israel students, faculty and outside non-student agitators who seek to monopolize campus life and turn it into a Middle East battleground. Like these students and activists who disrupted a speech by TIAA-CREF CEO Roger Ferguson at Cornell Business School last fall:

Ronald Lauder made a comment recently that rings true:

Fighting BDS “is not a burden or even a challenge. [It] is an honor….”

Lauder made that comment at a three-day anti-BDS powwow in London held in late March:

Nearly 150 pro-Israel politicians, diplomats and activists, including Intelligence and Strategic Affairs Minister Yuval Steinitz, gathered in London this week for three days of discussions on how to fight the BDS movement, the Jewish Chronicle reports.

“We will draft and lobby for legislation that will withhold government funding from academic institutions that boycott Israel,” World Jewish Congress president Ronald Lauder said at the group’s Tuesday night gala dinner.

“We will draft and lobby for federal anti-discrimination statutes in the United States against banks, businesses and governments that target only Israel,” Lauder continued. “We will follow the money to find out just who is funding these attacks on Israel and if there is any connection to terrorism.”

Of course I wasn’t at the conference. I never get invited to anything.

Opposing BDS is an honor, a satisfaction in itself.

“The LORD is my strength and shield. I trust him with all my heart. He helps me, and my heart is filled with joy. I burst out in songs of thanksgiving.” Psalm 28:7

Thanks Professor for keeping an eye on these lying BDS Misfits.
I’m buying Israel bonds with my tax return this year and I’m encouraging my family and friends to do the same.

You’re having a huge impact, William. No one can be everywhere all the time. But your strong string of successes is quite praiseworthy. Carry on.

I was drawn to this blog by Andrew Branca’s insights into the high profile self defense cases. I’m glad I found LI because it opened my eyes to the reality of the BDS movement. I had been halfway suckered by the JVP propaganda before coming here and reading Professor Jackobson’s coverage. Thanks for all the great work all at LI do.

The best hitters in major league baseball history failed two out of three at bats. WAJ is ‘hitting’ about .800 by my reckoning. Drop all humility (online) and get cocky about it. You’ve earned it and cockiness pisses liberals off.

Cockiness goeth before the snip off.

You’ve done yeoman’s work in a noble cause.

Please post the video every now and then of the young woman leftist at UCLA (I think) who lost it when the BDS motion failed. The hysterical tears of the left make angels smile. And inspire the rest of us.

Sad that none of the “adults” in the room, wouldn’t take away the banner and escort them out of the room. If the loud mouths are students, and not outside agitators, they should be expelled for hijacking a meeting.

And funny that they can’t even correctly pronounce “Northrop Grumman”

The reason it’s gotten this bad is that the campus occupiers of the 60s were not arrested and tried. Instead they were listened to, given jobs on faculty and eventually took over the universities.

With everything online, I am hoping that one day soon the brick and mortar campus will be threatened by online competition. The only way to kill that beast now is to starve it of funding.

Excellent work, Wm. they may not give you the recognition you deserve but they know of you and are using your work.

When they man up and give credit where it us due, we all will be cheering for you.

On another note, to the young who might be swayed by the rhetoric of others, my mother had this habit of saying, “well, I don’t know,” no natter what persuasive arguments were made to her. She meant merely that she herself hadn’t looked at the issue and was not going to claim knowledge based on someone else’s positions. Don’t be swayed. Be skeptical. Do your own research and form your own conclusions.

There is plenty of ammunition against these anti-intellectual, dishonest propagandists. It’s high time somebody employed it with some skill.

I still want to know how much money is being spent by all our various colleges on this nonsense. Imagine the effect on college tuition if these parasites were excised from our college budgets.

Outrageous. How is it that they get away with disrupting a and taking over a class for 5 minutes while the teachers stand there silently?

Because control of the classroom has been abdicated to ideology?

Thank you for all your efforts in combatting this grossly unjust movement.
Here is an informative doc which should help: http://israelcc.org/docs/resources-for-professionals/combating-anti-divestment-resolutions.pdf