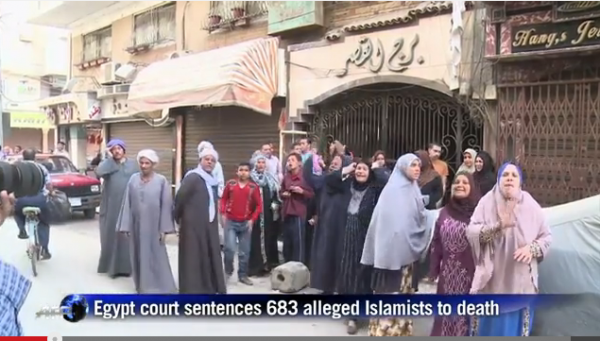 In Egypt, it looks like they have opted to go BIG:

A judge in Egypt on Monday sentenced to death 683 alleged supporters of the country’s ousted Islamist president in the latest mass trial that included the Muslim Brotherhood’s spiritual leader, defense lawyers said.

But in a surprise reversal, the same judge also reduced most of the death sentences handed to 529 defendants in a similar case in March, commuting the majority of them on Monday to life imprisonment.

The judge, Said Youssef, said he was referring his ruling on the 683 death sentences for violence and the killing of policemen to the Grand Mufti, the top Islamic official — a requirement under Egyptian law, but one that is considered a formality.

Both mass trials are linked to deadly riots that erupted in Minya and elsewhere in Egypt after security forces violently disbanded sit-ins held by Brotherhood supporters in Cairo last August.

General Sisi apparently has decided not to win the “hearts and minds” of the Muslim Brotherhood. However, he may be winning the support of his people, who have suffered with enormous civil unrest since “Arab Spring” sprung in 2011.

Sisi is the frontrunner in an election to be held at the end of May.

Former army chief Abdel Fattah al-Sisi is the frontrunner in the May 26-27 vote, riding a wave of popularity after deposing Mohamed Morsi, the country’s first elected and civilian president.

Sisi’s sole rival is Hamdeen Sabbahi, who came third in the 2012 election which Morsi won, and is seen by supporters as the only leader representing the aspirations of those who revolted against the dictatorship of Hosni Mubarak in 2011.

As Egypt now deems the Muslim Brotherhood a “terrorist organization”, it won’t be fielding any candidates.

It does not appear that the Obama Administration is particularly disturbed by these developments. The United States is set to deliver 10 Apache attack helicopters and relax a partial suspension of aid imposed after Egypt’s military ousted Morsi.

However, these are not the only interesting developments in Egypt this week. A Swiss archaeological mission found a cache of 60 royal mummies from the famous 18th dynasty, which looks to contain the remains of many princes and princesses that had been lost to history. Also, a team from the Polish Center of Archaeology conducting research on an ancient christian church uncovered a mausoleum made of marble and gold that may be the tomb of Alexander the Great.

There are some interesting things in this post, not the least of which is that the (apparent) love the Obama administration had (has?) for the Muslim Brotherhood seems to have grown ice cold. That MSM-declared (and Obama admin. sanctioned) “Arab Spring” was such a fiasco for the Middle East!

On some latter items:

I don’t understand who this candidate is representing: “Sisi’s sole rival is Hamdeen Sabbahi, who came third in the 2012 election which Morsi won, and is seen by supporters as the only leader representing the aspirations of those who revolted against the dictatorship of Hosni Mubarak in 2011.” (emphasis mine) Is it the people who revolted to gain economic liberty, or those who revolted who wanted Sharia law imposed on the nation? Any idea?

And, tangentially, this: Why would Alexander the Great’s tomb be in Egypt – I thought he died in the India/Afghanistan area?

Ptolemy, a lifelong friend of Alexander the Great and one of his most trusted Generals, was one of the four successors who divided the empire after Alexander died in Babylon, 323 BC.

Ptolemy, being the most astute of these men (and perhaps also related to Alexander by being a product of one of Philip of Macedon’s many affairs), wisely selected Egypt. He recognized he could carve out a new empire using the country’s wealth. He founded the dynasty the Cleopatra ended with her suicide about 300 years later.

Alexander’s body was not just any corpse. As a supposed “god”, it had a lot of political power. So, after it was buried and placed in a richly and elaborately designed horse-drawn hearse, it was traveling back to Greece. On route, Ptolemy stole it and it eventually landed in Alexandria.

It disappears from the ancient records around 300 AD. Here is more on this fascinating story. http://sbhistorygeek.wordpress.com/2013/01/12/the-man-who-stole-a-god/

Out there but very little reaction . it is too complex for almost everyone but I suspect most are just embarrassed to have been so wrong. In my time at the Guardian I was one of the few not taken in by the Egypt Spring Thing.