Branca speaks about Stand-Your-Ground, about his pro-SYG victory at UC Berkeley Law School debate, and the kefuffle with CNN legal analyst Sunny Hostin 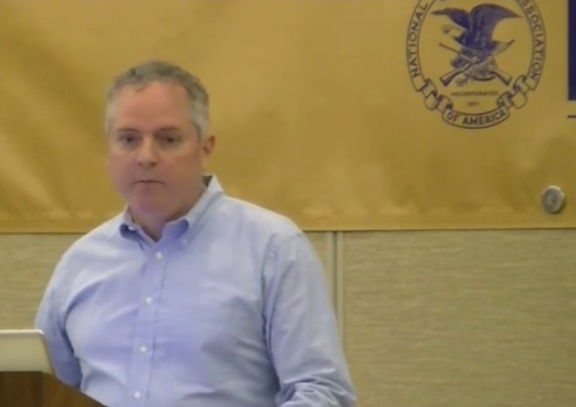 The past several days I’ve been attending the National Rifle Associations’s Annual Meeting in Indianapolis, having been invited to speak at the NRA’s 17th Annual Firearms Law Symposium as part of the larger gathering.

The Annual Meeting is a massive event, with something on the order of 70,000 people attending, hundreds of exhibiting vendors covering more than 9 acres of exhibit space, and talks by pro-2nd Amendment Senators, Governors, and television/radio personalities.

Given that context, my own little talk on Stand-Your-Ground ranks perhaps among the most modest of the Annual Meeting’s constituent components. Even taken just within the context of the other Firearms Law Symposium–which included such well-known civil rights scholars as Stephen Halbrook and David Kopel, as well as Indiana Supreme Court Justice Stephen David (whose talk was particularly outstanding)–I was a small fish, indeed.

Nevertheless, I’ve received repeated requests for video of my small talk, and I aim to please. Much of the substantive content of the talk–and, really, I talk substantively only for about 25 minutes–will be familiar to those who have previously seen my Stand-Your-Ground commentary from the pro-SYG victory at the UC Berkeley debate, from my posts here and elsewhere, or from my book and seminars.

In the interests of avoiding a straight-forward droning delivery of the law, I’ve interlaced what humor I could into the talk, and in particular the last four minutes or so consists of the “Downfall” parody that was prepared following CNN legal analyst Sunny Hostin’s refusal to honor her “Zimmerman wager” with me following the Berkeley debate, as covered at length here: CNN analyst welches on bet after Andrew Branca wins “Stand-Your-Ground” Debate.

Regardless, here’s my “SYG Talk” at the NRA’s 17th Annual Firearms Law Symposium.  Enjoy. (Apologies beforehand for the poor sound quality–it might be best listened to with headphones.)

As mentioned, the last four minutes of the talk I played the “Downfall” parody–this is not visible in the talk video–although you can listen to the audience laugh uproariously–you can watch it here in the second video posted below.

Law of Self Defense, NRA, Stand Your Ground

thanks, posted on my end too.
http://tinyurl.com/m72u3gz

have not had a chance to watch yet but certainly plan on it.

just an fyi, the link in the video that is supposed to lead to the other video actually links to your channel and not to any video.

Thanks for the heads up. I’ll likely leave as-is here, because the “Downfall” parody is right there, but I’ll fix it for future use.

It’s a high-def video, so it takes hours to do anything with it, on the system I have to use. Grumble.

well I was meaning the link in the description on youtube, have not had chance to look at the actual vid yet.
this part:
the link to which is provided at the appropriate time in this video (http:is.gd/DNSrwb).

Oh, OK, that was easy to fix. Thanks again.

What’s going on with Walker?

Walker and the Dunn retrial are both going to be happening next month, unless I have missed some recent changes.

Dunn just got an indeterminate delay. Lawyers need more time to prepare their loser of a case, I guess.

A judge ruled last week on Walker’s motion to dismiss, deciding that incomplete or misleading statements to the grand jury didn’t rise to the level of misconduct, and the case could proceed to trial.

The trial is still scheduled for next month, though at least one party is seeking a postponement.

But this could turn her into a star. It could be her big break, like the time that Blitzer guy was holed up in Baghdad during the first Iraq unpleasantness, and CNN almost turned into a real news outfit.

And I continue to be surprised at just how flexible Der Untergang turns out to be. Much like The Iliad, it’s all in the translation.

It is quite typical of the Left to make such bets and welsh on them. I can hear her now, it’s almost an archetype: “He was told ‘we don’t need you to do that,’ that’s what I meant.” Even though the bet was quite specific.

Never bet with a leftist without arranging for a trustworthy neutral party to hold the stake immediately. If done right away, they will feel compelled to fork over their share.

If there is no stakeholder, the leftist will always welsh. That’s what leftists do: lie, cheat, steal, and celebrate others who do.

Securing the bet in real-time wasn’t possible, as she wasn’t physically present–she participated via Skype.

Personally, I was struck by the far better judgement of Professor Lave-Rice, to whom I had actually directed the wager. She was smart enough to know that, hey, now that I think about it I don’t really know if that statement’s true or not.

This sentiment could only have been reinforced by the directness of the wager offer. Clearly I was in NO doubt.

Sunny was too dumb to exercise such adult judgment. Shocker, I know.

Andrew, is “judgement” the new “judgment”?

Always a pet peeve of mine. Saw in interesting article supporting either usage.

Sorry, a childhood living in Europe and reading UK novels (with UK spellings) put me on the wrong path. 🙂

“Judgment” is correct American, but sometimes I still slip up. 🙂

Just like she will never admit to being wrong. I don’t even believe she would try to equivocate, she will just pretend like it never happened and keep spouting the same bunk.

Not sure how long it’ll last. Someone got wind of the bet somehow and added this to her wiki. Wasn’t me.
I did submit a tip to Breitbart just for the laugh. Hope they use it.
http://en.wikipedia.org/wiki/Sunny_Hostin

On April 22, 2014, Hostin was participating in a debate on stand your ground laws at UC Berkeley School of Law when her debate partner, attorney Tamara Rice Lave, made the statement that it was “indisputed” that George Zimmerman had gotten out of his car after being told by police not to. Andrew Branca, also speaking at the debate, offered Lave a $100 bet that Zimmerman had never been told by police to stay in his car. Hostin (participating via Skype) said “I’ll take that bet.” Branca provided Hostin a link to the 9-1-1 recording affirming that Zimmerman was in fact not told to stay in his vehicle. According to Branca, Hostin has so far refused to pay. [2]