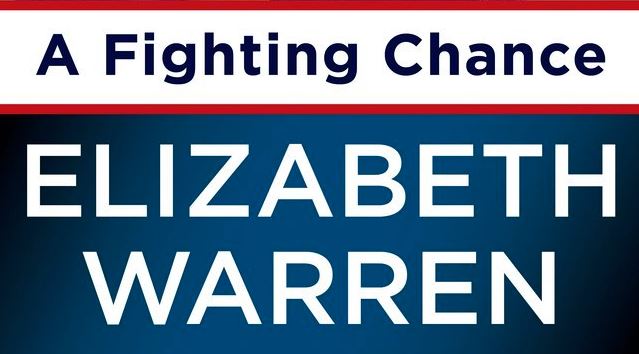 Elizabeth Warren is publishing A Fighting Chance, an autobiography chronicling her life story.

U.S. Sen. Elizabeth Warren has written a book chronicling her life story, from her working-class roots in Oklahoma to a seat in the Senate representing Massachusetts….

Will the book address Warren’s controversial claim to be Cherokee?

The book description at Amazon.com, presumably written by the publisher, doesn’t mention it:

As a child in small-town Oklahoma, Elizabeth Warren yearned to go to college and then become an elementary school teacher—an ambitious goal, given her family’s modest means. Early marriage and motherhood seemed to put even that dream out of reach, but fifteen years later she was a distinguished law professor with a deep understanding of why people go bankrupt. Then came the phone call that changed her life: could she come to Washington DC to help advise Congress on rewriting the bankruptcy laws?

The book will not be released until late April.

What’s your guess? Will Warren address her Cherokee story, and if so, in what detail.

Will Elizabeth Warren claim Cherokee heritage in her autobiography?

LOL. Love the part about her “deep understanding of why people go bankrupt.”

Warren’s understanding of the causes of bankruptcy is about as deep as her (non-existent) Cherokee roots. She didn’t research the actual causes of bankruptcy; she started with a popular leftist theory (i.e. that unpaid medical bills cause most bankruptcies) and then shamelessly manipulated data to make the “evidence” fit her theory.

The only thing Warren has a “deep understanding” of is how to work our sadly dysfunctional educational and political systems and make oneself rich and famous while being a complete and utter fraud.

I have NEVER had a bankruptcy client who was filing because of medical costs.

That is not, of course, dispositive and is limited to my own experience. Still…

I also wonder if Warren will talk about her “small business” founding daughter who was a pure crony capitalist.

Oh, this book will be a HUGE bestseller! She will surely make billions & billions, disappear into the sunset, and leave us all behind…yes, she’ll be missed…sometimes we may even find it hard to go on without her. (BTW, anybody remember nancy palosi’s book a few years back?? I think it sold 49 copies)☺☻

why address a lie when your sycophants have it all covered for you?
not a mention of it I bet.

She’s publishing her life story? Has she done something? Is something big coming up? Ah! 2016! she’s running for POTUS.

Heaven help us if Lieawatha Fauxcahontas makes it to the WH. Obama’s already turned it red. She will take the roof off and sell off the paintings.

“Then came the phone call that changed her life: could she come to Washington DC to help advise Congress on rewriting the bankruptcy laws?”

That phone called changed OUR lives and the financial marketplace for the worse. Now, WE don’t have much of a fighting chance, not against the Federation of Pooled Ignorance.

We should be the ones writing books like “How the Increasing U.S. Gov’t’s Spending Bankrupted Our National Defenses: How Putin Left a Pile of Hope and Change on Obama’s Shoes.”

So Ms. Warren sees marriage and motherhood as some sort of punishment or impediment to your dreams? I’ll have to tell my sister-in-law with two masters degrees, three kids and is the CEO of a non-profit with a multi-million dollar budget. She’ll be astounded.

I wonder if she will include more of her tribal recipes originally found in the New York Times.

I’d guess that she’ll mention it and the controversy, using it as an example of the war on women and how mean-spirited her critics were to attack her on a personal level. For those of us who know better, it’s just another lie from a lefty. For those on the left who know that right-wingers are evil, it will just confirm what they already know. Yeah, I’d look for it.

I heard the sub-title is ‘Dream Catchers From My Family’

It cracks me up that only a bunch of effete, northeastern liberal elites (a run-on redundancy?) would be impressed with a blonde, blue-eyed “Cherokee” and let her get away with being their token Indian “woman of colour” [sic].

Hell, in Oklahoma, anything less that about 4/5 Indian ain’t even worth mentioning. She’s an embarrassment to the state. In fact, I’d love to see my Cherokee and Choctaw ancestors’ faces if they could see such an obviously white person pretending to be an Indian.

In her own what she thinks is her superior mind she will.

We must all do our civic duty and go leave a nice, thoughtful Amazon review for this wonderful book after it is released.