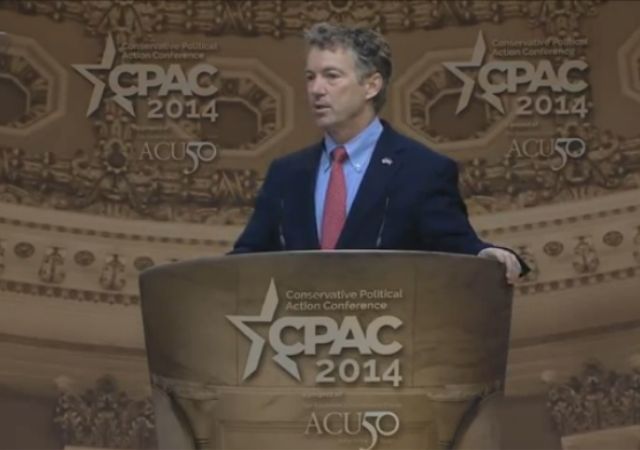 Rand Paul addressed the crowd at CPAC today in a speech that was largely focused on the constitution and civil liberties.

The Kentucky Senator drew applause as he criticized the federal government’s policies on domestic surveillance.

“Yet, as our voices rise in protest, the NSA monitors your every phone call. If you have a cell phone, you are under surveillance. I believe what you do on your cell phone is none of their damn business.”

Paul went on to talk about the importance of the Fourth Amendment, later quoting lyrics from Pink Floyd’s “Wish You Were Here.”

And then Paul concluded by inviting others to stand together for liberty.

“It is decidedly not a time for the faint of heart.  It’s a time for boldness and action. The time is now, stand with me, let us stand together for liberty.”

Watch the full speech below.

Despite all that I like about him, he still reeks of his father’s influence.

Very PC incorrect. His supporters are “almost” as rabid as those of his father – note the down thumbs.

I PERSONALLY get the vibe that he has learned from the backlash against some of his father’s positions and is willing to stifle himself in order to get elected. Then it would be determined how much his father’s son he is.

Clinton filled the bureaucracy with lib loyalist (think Lois Lerner), Bush didn’t purge many of these people. He wanted to “work with” the Dems. Obama has greatly increased statists in the government. If most of these people aren’t purged, it won’t matter who runs Congress or who’s President. Rand is one of the few who would remove these people.

>>“I don’t question Obama’s motives, but history will remember his timid defense of liberty,” he said.

This is where Paul loses me. “Timid defenses of liberty”? He’s got it backwards. More like aggressive assaults ON liberty. I really wonder how well he comprehends the Left.