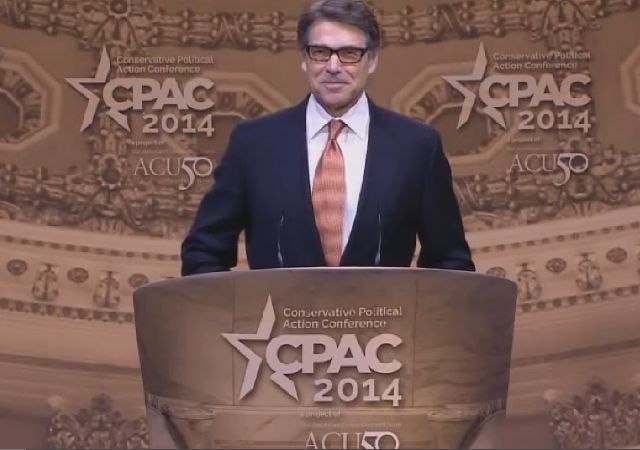 Texas Governor Rick Perry kicked off the second day of CPAC with a speech that prompted loud applause and cheers.

“I’m reminded this morning of words that speak to the American soul,” Perry said in the early part of his speech.  “Words spoken by Thomas Jefferson, who said, ‘a little rebellion now and then is a good thing’.” And after making mention of record debt, a stagnant economic recovery and America’s weakened place in the world, Perry said, “So I have a simple solution. It’s time for a little rebellion on the battlefield of ideas.”

It was the last couple of minutes of Perry’s speech that drew the most reaction from the crowd, as he began the conclusion with this:

“It is time for Washington to focus on the few things the constitution establishes as the federal government’s role: defend our country, provide a cogent foreign policy, and what the heck, deliver the mail – preferably on time and on Saturdays.”

“Get out of the health care business, get out of the education business. Stop hammering industry. Let the sleeping giant of American enterprise create prosperity again. My fellow conservatives, the future of this nation is upon you, it belongs to you. You have the power to change America.”

Watch the full speech below:

1. I dipped in and out of your speech. Though I agreed with what I heard, I was not moved to play the whole thing.

2. The swing vote in a national election is materially different from CPAC or the Texas electorate. If you want to be President—I grant you’re qualified, I wonder if you’re electable—, stop bellowing like you’re leading an Aggie pep rally.

Need we be reminded of the governor’s inability to memorize responses and speak to the issues when under pressure, which adds some credibility to rumors of his poor academic performance when he was the A & M yell leader? I think we know – so go back to sleep, Governor – you blew your chance and conservatives have long memories.

We don’t need nine candidates on stage at the debates in 2016.

If you want a good speaker with an impeccable academic background he’s already in the White House. He’s a constitutional professor if you didn’t know and a graduate of Columbia and Harvard with stellar grades (well, many believe that). But please, remind me again of all of his accomplishments. I can’t seem to remember.

Yeah, isn’t it striking how “The Smartest Man In The Room”, aka Barry Soetero, bumbles like a retarded idiot when he’s not reading from his tele-prompter? But George W. Bush, who couldn’t read from the thing without sounding stupid, can carry on an extemporaneous conversation and sound totally in command of the English language? Which is the “better speaker” then?

Even if you think all that you just wrote is true, you cannot vote for him again in the next election. I certainly wasn’t writing about Prez Zero nor was gs.

Obama is an extreme narcissist – Perry is a grinning dumbass.

Here’s a hypothetical question: Perry prevails and wins the GOP nomination; “X” wins the Dem. nomination. Which ass do you vote for – the grinning one, or the real deal?

I like your #3 – that’s clever – but have to say that CPAC really is a pep rally of sorts. I enjoyed the Governor’s speech and thought he made good points. Electable? Not sure, but I’m glad he’s on our side.

gs-this was intended to be a reply to your post.

…CPAC really is a pep rally of sorts. I enjoyed the Governor’s speech and thought he made good points. Electable? Not sure, but I’m glad he’s on our side.

Point taken about the pep rally. Nevertheless, the media are scouring the digital universe for every bit (pun intended) they can find that will make, by selective editing if necessary, a conservative look bad.

As for your question in your other comment, I’d presumably vote for Perry, possibly without enthusiasm. The Texas economy speaks for itself. That said, I’m a secular conservative. A scenario in which the D’s nominate someone I respect and Perry panders excessively to religious extremists is highly unlikely, but not impossible.

IMHO there’s a place in the Big Tent for both of us, gasper.

The ‘rat media whores will indeed scour for anything to twist to make conservatives look bad, but the real twist is that when they can’t find it, they manufacture it – damned if you do, damned if you don’t.

It’s time for conservatives to tell it like it is and stop COWERING in fear of the media. Your post suggests conservatives continue doing more of exactly what is wrong with the GOP, now better known as the GOJ (Grand Old Jellyfish),

Yeah, you guys don’t get a chance to get your message out unfiltered. It gets examined, analyzed and subjected to critical thinking. Sometimes the contradictions, hypocrisy and inaccuracies are noted. I feel for you. I really do.

Thank god you have Limbaugh, Levin and Fox, et al. They never do the kinds of things you describe in your 1st paragraph? HAHAHA

I hope you and gadfly fastidiously abstain from voting if Mr. Perry is the nominee.

That’s a simple illustration of one way the Reagan legacy was squandered. Too many Real Conservatives™, instead of creating winning coalitions while preserving core principles (which is had), prefer to act out their anger management issues.

Perry’s record in TX, particularly compared to the rest of the nation, and his conservatism keep him firmly on my five-deep list. I don’t place too much weight on his failed 2012 primary run. Every primary season all but one fail. Not enough to move off my list.

I’m still surprised “States rights” didn’t do better among the “base” last election. Perry was the man to carry that message, nobody else did.

Why is he wearing Moe Green glasses?