Echoes of The Great Oberlin College Racism Hoax of 2013. 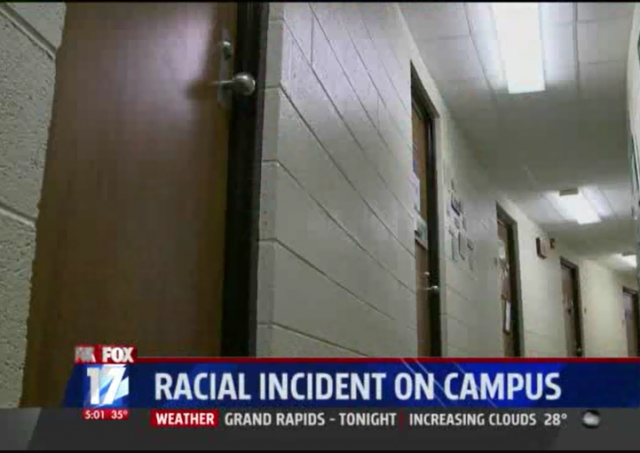 Here’s a photo of the student’s dorm door: 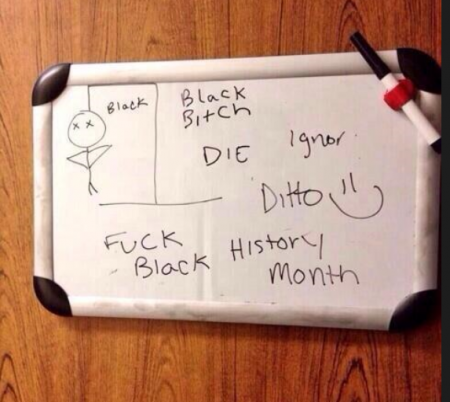 Much like the notorious Oberlin College racism hoax, the incident caused much turmoil on campus, as reported by MLive:

Students who live in the residence hall said they were surprised by the incident, saying signs of racial tension haven’t been present in the past.

One resident, Andrew Seawood, a freshman from Stevensville, said the slurs were upsetting because the residents of Copeland typically get along with one another.

“It was a little surprising when they did say something was written,” he said. “Everybody gets along with everybody.”

Mattie Johnson, a sophomore from Southfield, said she was “appalled” that such intolerance exists in 2014.

“We’re a multi-racial community, and we shouldn’t treat each other like that,” Johnson said. “We’re all Lakers, we should all get along.” …

In addition to the drawing of a person being hanged, the slurs also included hateful remarks written about Black History Month.

Donzelle Collins, a sophomore from Detroit, said the incident suggests the university still has ground to cover in building an inclusive campus.

He and others said black and minority students still make up a relatively small portion of the university’s overall student body. In fall 2012, 5 percent of GVSU students were black, according to federal data.

“It wasn’t a surprise, considering the area we’re in,” Collins said.

An emergency meeting was hosted Monday by the university’s chapter of the NAACP to discuss the incident. On Wednesday, students on campus said there was a strong turnout at the meeting.

It turns out it was a hoax, inflicted by the student who lived in the room and owned the whiteboard.

The Grand Valley State University Police Department has concluded a thorough investigation of the Racial Bias incident reported on February 17, 2014. The person believed to be responsible for the drawing and language written on the dry erase board is a Grand Valley student and the owner of the message board.

The incident has had a disruptive impact on the community and as a result, the student has been referred to the Dean of Students for a student code violation. University policy does not permit the release of his/her name.

It will be interesting to see if the GVSU administration uses the hoax to push an agenda, which is what happened at Oberlin.

I sent this info to huffpo using their submit correction form, lets see if it ever gets corrected.

I did as well

Huff took the article down and posted a quick update, attempting to make the original story to not be a partisan article attempting to prove america is racist but just one of reporting. Pretty funny

Thank you for a Saturday morning chuckle.

So, they won’t say if the student was black or another race……

If it was an African American, then it is a hoax?

If it was a student of any other race, it is racism?

Is that how it works?

And, since only 5% of the population are black, will they expel him/her?

If the incident was truly disruptive to the campus, and obviously has made national headlines which impacts the national conversation, shouldn’t these administrators want to make it obviously, publicly clear that they will not tolerate hoaxes or instigation of false hate crimes?

Nah. I’m with you – they will use it to forward an agenda…………as the left always does. “Never let a crisis go to waste.” -Rahm-bo “Dead Fish” Emanual

A hoax is actually worst than a real slur because it creates hatred and anger where none exists.

And, to be realistic, every time a something like this is reported, you have to immediately wonder (I say immediately assume) that it is a hoax.

If a single “hoaxer” was ever punished, it would eliminate hoaxes – and probably reduce reported “racial” incidents by 90%. I guess that is why they will never be punished – it would eliminate too many good “news” stories for the left and the racial-victim monopoly.

It also demonstrates that black racists DESIRE the tension and animus such an event inspires because it creates scenarios in which whites look like the racists. The narrative must go on in order for them to reach a superior position in which they can control white culture and speech.

Racial hoaxes are not that uncommon:

A minor correction, GVSU is on the far western side of Michigan, the main campus is west of Grand Rapids. It is “close to” Detroit only like it is “close to” Chicago or Milwaukee (which are both closer).

Corrected. I thought I saw it referred to in one of the earlier news articles as near Detroit, but should have checked map.

As long as the map wasn’t a racist map. Can’t be too careful nowadays. 🙂

The hoax aspect did make the 11:00 TV news Friday night in the Grand Rapids market.

here’s a link to the TV news report:

The Democrats are desperate for their race war. They are doing everything they can to stir one up. It would be their Reichstag moment.

I bet the owner of the whiteboard is black.
Maybe the hoax went out of hands.
Maybe he wanted it to go that way.

And that’s a conversation that needs to happen so that this kind of incident does not repeat. We are at a point where crying “intolerance” has become a weapon.
Unscrupulous minority members are free to make up their own fake micro or macro aggression only to have an opportunity to play the race card.

It needs to stop. NOW.

If you get bad grades in school: Nothing to do with the color of your skin. Try harder. Spend more time studying, less time text-ing, facebook-ing and party-ing.

If you did not get that job: Nothing to do with the color of your skin. Be courteous, professional and competent and you’ll get it.

If I asked you to leave my establishment: Nothing to do with the color of your skin. Pull your pants up and you will be welcome. Nobody here wants to see your underwear.

If somebody grabs their purse when they see you: Nothing to do with the color of your skin. Don’t dress to look like a thug and you’ll see the change. You cannot reason against statistics.

And no, dude, I don’t hate you.
Nobody hates you. Stop using the word “hate” and start thinking about what you do and how you project onto others. Improve “the contents of your character” and you’ll find out that nobody gives a shit about the color of your skin.

If you don’t want to celebrate black history month, don’t feel bad. Just celebrate American history year round by reading the Declaration and Constitution. No need to hate yourself cuz you don’t care about BHM.

Why would anybody hate him/herself for not giving a fare-the-well about BHM? Most of it’s a bunch of cock-and-bull stories anyway.

How about a white history month in which blackAmericans celebrate the trillions of dollars and special privilege laws, regulations and policies that have been thrown at them for five decades by white Americans?

That isn’t what vast numbers of ghetto and lower socioeconomic blacks want. They want to continue their deleterious culture, segregated from whites, while whites pay for all of it. Yes, there are some who “get it” and move upward and out through perseverance and hard work, but not enough of them even try. It’s easier to be on permanent vacation, receiving government checks and subsidies for their maintenance and comfort while wilding the streets and disrupting normal society. The history of Detroit is an impeccable example of the cycle of destruction their culture and behaviors afflict society at large with.

Never has a group of people in the history of mankind been given more handouts and special privileges in order for them to succeed and ‘overcome’ (rolleyes) and had more excuses made for their failures than American blacks. Why do you think over 90% of them vote ‘rat? They want to continue and advance their current status of handouts and special privilege while giving nothing in return except more violence and dependency.

Many black Americans have worked hard and succeeded on their own merit, but, as a percentage of their population, that number is small. And I’m not including those who’ve been handed government jobs because of their ethnicity, even though the majority of them are near-useless slackers. That’s just glorified welfare.

What do you see when you look at their motherland? Slavery, violence, disease and starvation, even with all the global handouts they’ve received. In each and every case of colonialism on the continent of Africa, the natives fared better than they ever have under their own governance. Tyrants rule.

You, obviously, are suffering from White Guilt Deficiency Syndrome. You need to listen to more NPR and watch more PBS.

Nah, he just got a copy of the Proclamation of Amnesty and Pardon for All Persons of European Descent by the great Dr. Walter Williams:

Everyone should get a copy.

Ah….Walter Williams….one of the funniest, smartest people in America. He is a delight to read and an even bigger treat to listen to.

Even Mrs. Williams knows it. 😉

I have not read the book. I think I’ll get it for my hubby’s birthday coming up soon.

From the drawing it is obvious that someone hates short legged, large headed people with x’s for eyes and has wings.

Given the historical track record, when similar incidents occur in the future I’m going to assume it was a hoax committed by a race obsessed liberal Democrat. That will be my starting position. I’ll be correct most of the time.

If you are still in Oakland, THAT would be enough reason to leave, rat thar.

[…] A student at Michigan’s Grand Valley State University — apparently a black female &#8212…. This led to the predictable recriminations, with an “emergency meeting” on campus “hosted . . . by the university’s chapter of the NAACP.” […]

The student has been referred to the Dean of Students for a student code violation.

Color me surprised if she gets more than a slap on the wrist.

Color me surprised if she even gets so much as a slap on the wrist.

[…] Via Legal Insurrection who has more on this latest hoax. […]

Case of Racist Messages Written on Black College Student’s Door Finally Solved — Now There Are Only Faces Full of Eggs to Wipe Clean | Video | TheBlaze.com | March 23, 2014 at 12:46 am

[…] it turns out that all the outrage and statements and meetings happened over a hoax, Legal Insurrection […]

Glenn Reynolds noted that there are more confirmed hoaxes these days than actual racist incidents.

There should be an annual award for the best racist or homophobic hoax. Entries should be judged on Venality, Level of Angst Caused, and Amount of Official Action and/or Hand-wringing.

Perhaps call it the Tawana Brawley Award after one of the early practitioners of the art.

[…] in front of a black Grand Valley State University (in Michigan) student’s door last month at was written by the student himself. This was not discovered, however, until the incident was used to justify the usual condemnations of […]

JackRussellTerrierist in reply to A Hate Speech Hoax Is As Wrong As Hate Speech, And Perhaps Worse. | Ethics Alarms. | March 24, 2014 at 12:28 am

Perhaps? There’s no “perhaps” about it.

[…] keep up the tradition (I guess), we have the Grand Valley SU racism hoax of 2014. PuffHo commenters were duly outraged when it first came up but, in the words of the GVSU […]