Missing their own lowered goals. 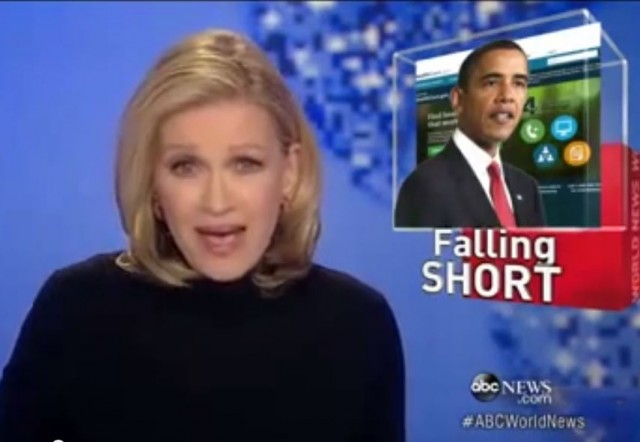 From Philip Klein at The Washington Examiner, Obamacare signups slow down in February, youth enrollment well below target:

The pace of Americans signing up for privately administered insurance through President Obama’s health care law slowed down in February, according to a new report from the Department of Health and Human Services, and youth enrollment is well below target levels set before the program’s launch.

Weeks before the health care law’s exchanges launched Oct. 1, an HHS memo projected that 5.7 million individuals would enroll in a plan through one of Obamacare’s exchanges by the end of February. In reality, HHS said Tuesday, just 4.2 million Americans had signed up in the first five months.

HHS still hasn’t disclosed how many Americans who have signed up for a plan through the website have consistently paid their premiums, which is how enrollment is typically measured. Thus, HHS figures could overstate enrollment by around 20 percent to 25 percent.

About 4.2 million people have signed up for health plans on Obamacare exchanges through the end of February, making it unlikely that the Obama administration will hit the estimate of 6 million enrollees by a key deadline at the end of March.

Whatever momentum appeared to be building in January dropped off in February, as the number of sign ups fell below the administration’s expectations.

The report is here.

How many paid? Don’t know.

Reactions are coming in fast and furiously:

Signups are not enrollments.

So, @ThePlumLineGS is shocked I'm judging Obamacare against the administration's own targets. Journalistic malpractice!

Admin. spox says they don’t have authority to extend March 31 open enrollment deadline. Expect that position to be reversed in a few weeks.

They've long said young adults need to make up 38.5% of the total enrollments. With a month to go, that number stands at 25%.

Maybe now they will finally see that we DON’T want this!!!

Right, they’ve socialized the health insurance industry, which is all they ever really wanted to do. Now it can be regulated by administrative fiat. Mission accomplished.

YES! Control is the issue, not health nor healthcare. Take over the healthcare industry and then tie everything to that control. Cigarettes, Abortions, guns, drugs, etc. Remove these issues from the various legislative processes and dump them all into a healthcare regulatory agency – and generate money for big govt at the same time.

Why would the govt care a flying fig about the health of the citizen, other than to insure the citizen could pay taxes?

With all the press about bullying, what is more bullying than to have a governmental goon deciding whether or not you will
be entitled to health care.

When you or a family member is sick, injured and/or suffering, you will do whatever they say (like sign this Hillary absentee ballot) in order to get treatment.

Come-on EP…us not wanting it is the point of the exercise. The goal is to simply show us who is in charge so we know to whom to beg.

And I had such sincere hopes the administration could turn things around. After all, isn’t that what the media has been telling me?

Jay Carney tweeted this morning that Prezy’s appearance on “Funny or Die” yesterday generated the largest number of “referrals” to Obamacare.gov. And that means….what? Young people simply clicking onto the Obamacare site from a link to the show?

So….if you factor in the number of people who got policy cancellations, did O’care cause a net drop in people with health insurance?

Actual health care reform would not begin with increasing the total cost of health care, including subsidies to compensate for government debasement of capital and labor. Actual health care reform would address availability and affordability, specifically resources and costs. It would focus on reforming the education system, which has left so many people incapable of caring for themselves. Obamacare is a government revenue program designed to mitigate the imminent threat of hyper-bubble economics, especially in highly financed and subsidized districts.

re: mitigate the imminent threat of hyper-bubble economics

Through a progressive capture of private capital and exploitation of labor (i.e. redistributive change).

In left-think, the supply of medical resources (human and otherwise) is quite irrelevant to cost. In fact, if you believe those who are protesting the David Koch bequest to build a hospital wing in NYC, you’d think that contributing to an expansion of medical resources is consistent with being hostile to “affordable health care,” as the protestors claim the Kochs are.

I haven’t seen any Democrats express any concern that the closure of medical facilities and exiting of doctors from the profession as a result of the ACA might — just might — work against the putative aim of making health care affordable and accessible. So either the Dems are all profoundly ignorant and irrational, or they really don’t want to improve health care in any way. Or both.

Wasn’t it just 5 months ago when they were telling us that 5 million cancellations was nothing. Not only were all the policies crap but 5 million was such a small portion of the total people in the US that it was insignificant.

Damn! These kids just won’t open up and take the awful tasting medicine.

I hope it’s because they know more than they look like they know.