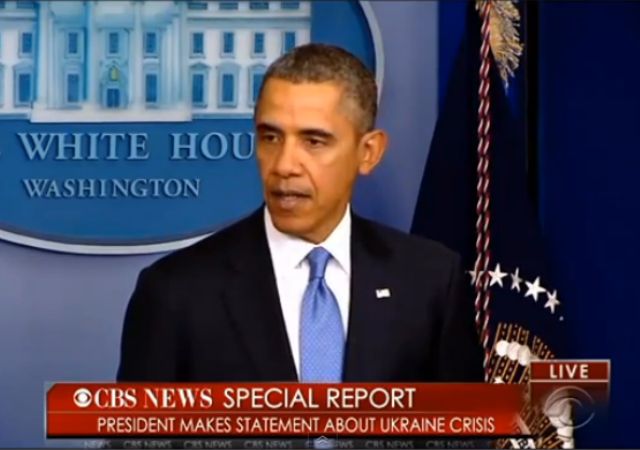 Following Sunday’s referendum vote in Crimea to break from Ukraine and join Russia, President Obama on Monday announced a series of new sanctions. (Video at end of this post).

Putin himself, suspected in the West of trying to reconstitute as much as possible of the former Soviet Union under Russian authority, was not on the blacklist.

In Brussels, the EU’s 28 foreign ministers agreed on a list of 21 Russian and Ukrainian officials to be subject to travel bans and asset freezes for their roles in the events.

The EU did not immediately publish their names. Washington and Brussels said more measures could follow in the coming days if Russia does not back down and formally annexes Crimea.

“Today’s actions send a strong message to the Russian government that there are consequences for their actions that violate the sovereignty and territorial integrity of Ukraine, including their actions supporting the illegal referendum for Crimean separation,” the White House said.

A senior Obama administration official said there was “concrete evidence” that some ballots in the Crimea referendum arrived in some Crimean cities pre-marked.

Speaking from the White House this morning, President Obama said, “as I told President Putin yesterday, the referendum in Crimea was a clear violation of Ukrainian Constitutions and international law, and it will not be recognized by the international community.”

Obama then went on to outline “a series of measures that will continue to increase the cost on Russia and on those responsible for what is happening in Ukraine.”

Among those measures are sanctions on a number of specific individuals and entities, as well as continued consultations with European partners on additional measures.

From Obama’s statement Monday (transcript from the Washington Post):

First, as authorized by the executive order I signed two weeks ago, we are imposing sanctions on specific individuals responsible for undermining the sovereignty, territorial integrity and government of Ukraine. We’re making it clear that there are consequences for their actions.

Second, I have signed a new executive order that expands the scope of our sanctions. As an initial step, I’m authorizing sanctions on Russian officials, entities operating in the arms sector in Russia, and individuals who provide material support to senior officials of the Russian government. And if Russia continues to interfere in Ukraine, we stand ready to impose further sanctions.

Third, we’re continuing our close consultations with our European partners, who today in Brussels moved ahead with their own sanctions against Russia.

[…] Fourth, we’ll continue to make clear to Russia that further provocations will achieve nothing except to further isolate Russia and diminish its place in the world. The international community will continue to stand together to oppose any violations of Ukrainian sovereignty and territorial integrity, and continued Russian military intervention in Ukraine will only deepen Russia’s diplomatic isolation and exact a greater toll on the Russian economy.

The President closed by saying that he believed there was still a way to resolve the situation diplomatically to meet the interests of both Russia and Ukraine, under certain conditions.

“That includes Russia pulling its forces in Crimea back to their bases, supporting the deployment of additional international monitors in Ukraine and engaging in dialogue with the Ukrainian government, which has indicated its openness to pursuing constitutional reform as they move forward towards elections this spring,” Obama elaborated.  He then promised, “we’re going to stand firm in our unwavering support for Ukraine.”

…and the Russian markets rally on news of weak response.

Really. People with “skin in the game” know how to read Pres. ScamWOW.

Government Sanctions against 16 Russian and Ukrainian citizens? Does that mean they’re not allowed to buy new X-Boxes or eat cheeseburgers? What a retard.

“First”… sanctions not on Russian, but on a dozen Russians. Effect? Zero.

“Third”… close consultations with European partners with their own sanctions. France will continue to build warships for Russia, Europe depends on Russian energy imports, and I’m pretty sure Poland really loves its buddy Obama, but… Effect? Zero.

“Fourth”… Obama will continue the falsehood that Russia is being isolated internationally because nothing frightens a Russian dictator like vague slippery slope arguments. If I recall, it was vague slippery slope arguments that brought down Russian czars, deposed Stalin, and won the Cold War for the west. Maybe I recall incorrectly. Anyway, Putin surely shook in his boots to hear Obama speak weakness to power. Effect? Zero.

Does Obama honestly think the Russians did not game this out in advance, did not predict and prepare for this nothing burger of a response?

Over $100 billion in US Treasury bonds has been moved from custody in US banks to other countries in the last 60 days. Most observers believe this was the Russian government’s and Russian oligarchs’ monies that they feared might be subject to sanctions.

So in effect Obama is saying if you bring back any of the money you removed from our banking system, we will freeze it.

Putin is saying, “Ooooo, I am soooo scaaaaaaaaaaared!”

It’s even more embarrassing that hes trying to be tough, and epicly failing at it.

You beat me to the punch. I can’t wait till the Russian tanks turn up on the Rumanian border. What will he do then? Put a tariff on caviar imports? The West has rolled over. Europe is looking the other way, and France in particular is building helicopter assault carriers for the Russian Navy.

Ukraine has two short term options for deterrence. 1) rig ALL the Russian gas pipelines to Europe passing through Ukraine for destruction. and 2) rig their 15 active nuclear power reactors to blow and create 15 Chernobyls. Those are the only two things that they have in the short term standing alone against Russia, the US, and Europe.

In the short to medium term; Ukraine, Poland, and the Baltic countries need to acquire a deliverable, countervalue strategic deterrent consisting of some sort of WMD, nuclear preferred. Poland and the Baltic Republics are NATO members. That and a couple of Euros might buy a cup of coffee at a Starbucks. With the NATO membership, including the United States, lacking both the will and the means to defend its members; the peripheral NATO states are on their own and exposed in a Hobbsian world. For that matter, I could see the core NATO countries vying to sell each other out in the face of Putin applying pressure.

You have to think that there are more than a few Ukrainian pols and military leaders slapping their foreheads this morning thinking, “we should have kept the nucs…”

Having slapped down Putin, Obama can return to the real issues that threaten America: rape culture, homophobia, and racism.

Oh, and climate change and islamophobia, of course.

You left out inequality. Hater…

I left out income inequality because I consider it a legitimate issue. Afaic way too much of it is due to the regulatory state and to crony capitalism. Those are the leading things I’d rectify, i.e. set up conditions under which the economy can seek out the best ways to heal itself. However, for a Democratic administration (a RINO administration too, to a lesser extent), they are features, not bugs.

What ???? No sternly worded letter proposed for debate at the UN Security Council ?

I mean, if Obama wants to get REALLY serious …..

5 long disgusting, incredulous, infuriating years of this man’s leadershitp have shown us that whoever Obama supports/defends is linked to Al Queda or some evil entity and whatever he does will be destructive to America.

Of course, consistent with his muslim religion.

America elected a weak sister twice.
And now the world is paying the price.

So Obama has placed several un-named individuals on Double-Secret-Probation?

Hey Obama. The 80’s called. They want to know if you need a foreign p[olicy.

Read a lot of dims are sore that obama’s Organizing for America is taking a lot of money away from their campaign war chests as the bigger donors aren’t showing like old times.

Every time I hear the White House protesting the validity of the vote in Crimea, I expect Putin to say something to the effect of:

“If we ran our elections Chicago-style, our citizens would revolt because they wouldn’t stand for such corruption.”

An immoral leadership cannot take a “moral stance” against another country’s actions.