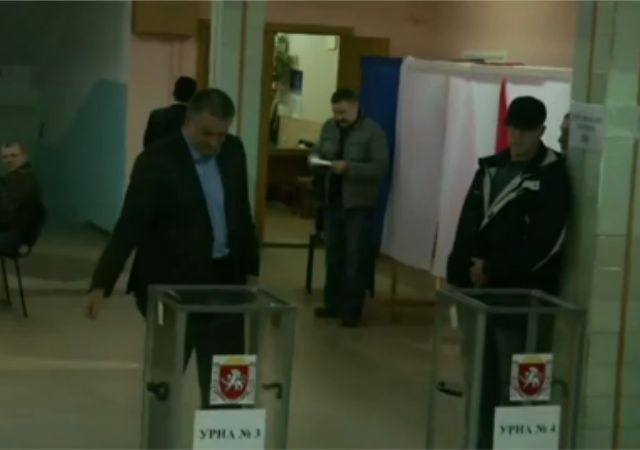 In what will likely come as little surprise to anyone who has been following the events in Ukraine, Russian state media are reporting that early exit polls show Crimea has voted to break with Ukraine and join Russia.  Official results are expected later.

Russian state media said Crimeans voted overwhelmingly to break with Ukraine and join Russia on Sunday, as Kiev accused Moscow of pouring forces into the peninsula and warned separatist leaders “the ground will burn under their feet”.

Caught in an East-West crisis reminiscent of the Cold War, Kiev said Russia’s build-up of forces in the Black Sea region was in “crude violation” of an international treaty, and announced plans to arm and train 20,000 members of a newly-created National Guard to defend the nation.

The White House had already denounced the vote ahead of the official results, calling the referendum illegal and citing Russian intimidation.

The U.S. rejected the Crimea secession referendum Sunday as illegal and readied retaliatory penalties against Russia, while shifting sights to deterring possible military advances elsewhere in Ukraine that could inflame the crisis.

Even before official results were announced, the White House denounced the vote on Crimea joining Russia, saying it violated Ukraine’s constitution and international law and was held under “threats of violence and intimidation from a Russian military intervention.”

It said “no decisions should be made about the future of Ukraine without the Ukrainian government” and noted that Russia had rejected the deployment of international monitors in Crimea to ensure the rights of ethnic Russians there were protected.

“Russia has spurned those calls as well as outreach from the Ukrainian government and instead has escalated its military intervention into Crimea and initiated threatening military exercises on Ukraine’s eastern border,” the White House said.

“Russia’s actions are dangerous and destabilizing,” the White House said.

U.S. officials reaffirmed that the Obama administration will, along with the European Union, impose penalties on Russia if it annexes the strategic region. They also warned that any Russia moves on east and south Ukraine would be a grave escalation requiring additional responses.

You can follow live updates on Twitter below, and we’ll add any significant news updates as they become available.

And Kim Jung-un just won re-election in North Korea with 100 % of the ‘vote’.

Two more years of this pansy we have in the White House, that no one in the world including Putin takes seriously, and the ‘former’ USSR will be the ‘new’ USSR, as big as it ever was.

I hear the Tartars boycotted. So the results are skewed that much more.

I heard the polls were all sprayed with Crest.

Which gets rid of tartar, you know ….

There is an awful lot of Bossy going on by the English for months over Scotland’s referendum including bringing in The International Banking Cabal to admonish & frighten the little Scots in their kilts..

However you see this secession , it can never be put in the Michelle Obama Bossy Box. .It is Real Polititik , something the west has forgotten exists & has since humans pushed out the Neanderthals.

i kinda prefer realism than a false belief in an exalted human nature saving us from ourselves.

not wishing to hijack ( or reroute ) this thread but just now in the Telegraph , I read underneath the Crimean results this…….

‘Britain to give up Nukes if Scotland votes for independence ‘ .

An exit poll is where people leaving the voting area are asked how they voted. Even in the US, where people are under no compulsion to vote either way, exit polls are notoriously unreliable. But 93%? That’s clear evidence of compulsion of some sort.

I think in this case it might be accurate.

Think of this as a deep blue (or red state) with the two opposition groups knowing they will lose big no matter what. The opposition is disheartened and doesn’t come out to vote. The people in favor are motivated and come out. What might have been 70-30 can quicky become 90-10.

We hear that the Tartars boycotted the vote. If that’s so then 90-10 is not unreasonable.

PS. I accidentally pressed the down vote button. This rating system is terrible. One should be able to change one’s vote by selecting again.

As an infamous Russian one said: “It doesn’t matter who votes, what matters is who counts the votes.”

That would be Joe Steel?

Hell no, that was said by his son, V. Putin!

I find the 90% result suspicious. On the other hand, Tatars are 12% of the population and they boycotted the referendum. It actually makes sense for the opposition to abstain to make the results appear questionable.
And, of course, there is the issue of Russian troops being there. On the other hand, this is a pro-Russian area that was probably going to vote join RF given that there is a revolution going on.

I find it completely ridiculous though. I’m sorry, do people really think that a free and fair vote in Crimea would result in Russia “losing” the referendum? With these demographic numbers? So people have to argue a) ballot stuffing, b) skewed ballot counting, c) intimidation at the barrel of a gun. And that’s not even to say all 3 aren’t happening, but did people expect 50% +1 votes against the fast entry into Russia if none of those things were present, after “Kiev” made a big public show of eliminating the right to use Russian in official business in the Crimea? Try that one in Quebec.

In free and fair elections, a vote approaching 80% is rare to the point of non-existent. Vote percentages in the 90s are the mark of the mark of fraud.

That’s why it looks like smart politics for the Tatar population (and others opposing) to boycott the referendum.

My prediction follows as to what comes next:
Crimea is just the start of Putin’s grabs. He wants much of Eastern Ukraine too. Also, Russia wants a land route to its Kaliningrad territory, a modest 50-mile wide strip ceded from Lithuania and running along the Polish Border might do. Lastly, Putin is concerned that security of the Gulf of Finland will be endangered unless Russia controls its southern shoreline, so Estonia must cede control over that to Russia.

I do hope this prediction does not come true yet Putin is going to continue his power grabs anyway he can until he’s stopped. Our immediate future might be way too interesting, even in the long term too.

Obama and Kerry strike me as being too much like Neville Chamberlain and not at all like that great bulldog Winston.

i was just teading Yatsenuk going ballistic . He is threatening to hunt down all who agitated for this separation& ‘burn the ground below them’ ‘ . ‘ not matter if it takes one or three years ‘ etc. etc . ( oh he also has an election platform of Ukraine political factions not going after their political foes.

Looking further into his background for the obvious personal injury here we seehim as having been appointed Minster of the Crimean Economy at the age of 27 . What’s the bet he made many enemies amongst the Crimeans who have no intention of behing under him again? Hence an even higher secession vote.

With maybe another person as PM , maybe a different timetable but Putin knew to strike now against Yatsenuk would be a cinch.

Former Kharkov governor was recently arrested and transported to Kyiv to stand trial for talking the separatist talk immediately after Maidan’s victory. Turns out it was illegal.

Yatsenuk &. company have placed their oligarch friends in positions of Governor – which is applauded by the US ambassador.

You are too hard on them. After all they did accomplish the all-important task of moving the election up by 9 months.

This isn’t totally fair. They have also moved to pare the budget to match revenues.

And how does mobilization and possible loss of, for instance, the Kharkov region figure into that?

If you are stupid enough to believe more than 20% of Crimean citizens prefer living under Russian autocracy to Ukrainian democracy, you really should only use computers under close supervision.

It is entirely idiotic to assume that because a proportion of people speak a given language that they would rather live under despots and oligarchs than in a democracy moving towards closer ties with Europe. Entirely. Only idiots and those paid by the Putin regime through their cut-outs, including any number of previously assumed “neo-con” or “anti-communist” writers and bloggers, could possibly believe such garbage.

The lesson to be learned from this is one that Americans in TX and CA are ignoring: you run the risk of balkanizing your country when you have an abundance of immigrants from a neighboring country residing in the state or province adjacent to their country. They usually want all the privileges of your country while maintaining their national and cultural identity. When Russia heads south, as it will, look for the Crimea to return to Ukraine, especially if life in the Ukraine is good.

Estragon, Juba Doobai,
I think you are naive about Russia. Russian national idea is to tolerate any tyrant as long as he makes somebody else even more miserable.

Nice one, Edge. My thoughts exactly. It’s like there’s a social compact: you’ll be like a cell of a body, totally insignificant by yourself, sloughed off without anybody noticing. But the body itself will be covered in glory.