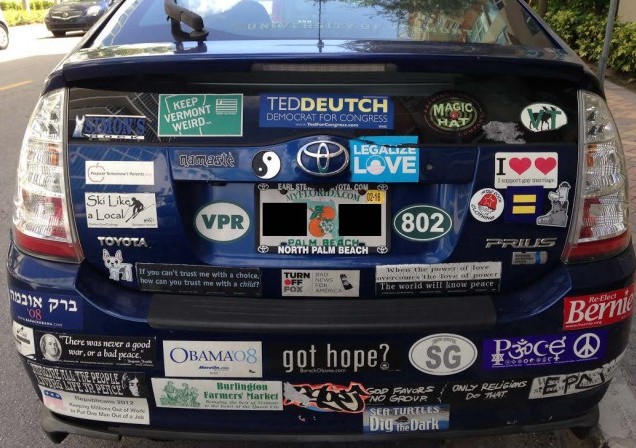 Giving California Crazy a run for its money.

This Prius was parked in Edgewater, the hottest, newest and trendiest section of Miami, Florida, where condominiums are now being snapped up for $400-$600/square foot. (A bargain, still, compared to South Beach and some sections of downtown Miami where preconstruction can command $900/square foot).

There were so many Liberal cliches plastering its rear-end (including some plugs for the State of Vermont, the University of Vermont and Socialist Bernie Sanders), but I thought it was both curious and telling that no room was made for the Wonders of Obamacare. 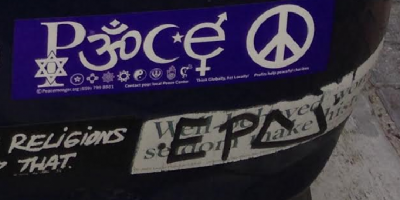 What does that even mean? The Republicans are somehow the ones who have dictated the administration’s policies?

Another hater who will live and die a disappointed, bitter, but self-righteous nudge.

The world, as they understand it, does not, and never will, exist. Nor can it.

Personally, I don’t think someone as dumb as you should have a choice….or a child!

“Personally, I don’t think someone as dumb as you should have a choice….or a child!”

Thanks. I got my first laugh of the day.

Ironically, the choice is about the child, to kill it. That’s the only choice they want. So, logically, if your choice is to kill the child at any time you want, nobody will trust you with a child.

The bumper stickers may show this owner’s heart is in Vermont but the license plate- and almost certainly the drivers license -say Florida resident.

I see a lot of these Florida hummingbirds around here from April through October. How common are they in Vermont?

I’m convinced that the owner is bald-headed, hooked up to a pod, and being fed his “reality” from a computer matrix.

Vermont has a graduated income tax which I suspect the owner of this cliche on wheels does not pay because the license plates on the car would seem to indicate a tax domicile in Florida, a state that has no income tax. That leads to a second question. Where does the owner vote? Vermont? Florida? Both? Part year residents voting in two states can be a serious problem.

Back in those quaint old days when we were a “nation of laws,” voting in more than one state, or more than once in the same state, was against those aforementioned laws.

If I were unfortunate enough to be standing in line with this person, I’d be tempted to step out of the line and go to the back, because you just know this woman can never, ever STFU.

(I’d be tempted to do something else, but blithering idiots blithering are not worth going to jail over.)

As the Beverly Hillbillies jingle went,

“California is the place you ought to be!”

Florida has no state income tax. California has one of the highest in the nation.

But notice how they don’t seem to care about visual pollution.

Far be it from me to advocate vandalism, but there is a liquid available in can or spray bottle that chemically loosens the adhesive holding down vinyl or paper bumper stickers. You’d see a car like this, give it a quick spray, and walk away. Within hours the bumper stickers would start loosening and draft winds or the next car wash would do the rest. But I don’t advocate doing this, no siree.

How is it vandalism? Removing lib filth like that from public view is what I call a public service.

A little chlorine bleach in a spray bottle, and watch the ink run!

Good luck with that. The rest of us know better.

“There was never a good war, or a bad peace”

This is right up there along with “War is not the answer”.

It kind of depends on what the alternative is. Myself, I’d consider it a “bad peace” to succumb to dhimmitude. I’m more of a “Live Free Or Die” kind of person.

But to each his own. May you wear your chains lightly, dude.