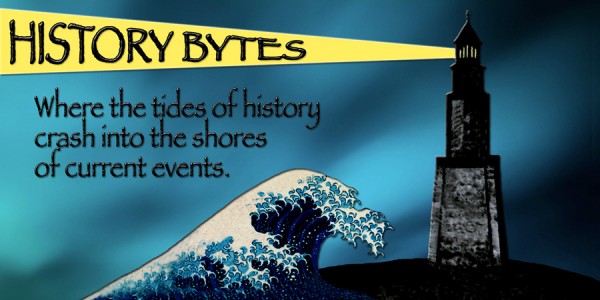 I have been very grateful for the media experience gained by being a contributor at Legal Insurrection and the Executive Producer for Canto Talk.

Professor Jacobson has been a big inspiration behind a project I have been working on and which is now ready to launch:  History Bytes.

The tagline of this new, pay-for-podcast program is “where the tides of history crash into the shores of current events”.

During discussions about today’s news, listeners and readers often have questions about the historical reasons behind the developments being reported.  I have partnered with Barry Jacobsen, author of “Deadliest Blogger,” former associate producer of SpikeTV’s “Deadliest Warrior,” and frequent guest/co-host on Canto Talk to delve into the events and personalities of the past in an attempt to unveil the reasons behind the headlines we now see.

Consider it a“History Insurrection” – we cover real history of interest to independent and conservative listeners.

Here is an example of how it works: We have been closely following what is happening with the Russian annexation of Crimea.

The most recent History Bytes show puts these events into context:

Show #005: In the Shadow of the Bear
Military history expert Barry Jacobsen discusses the history of the Black Sea region of Russia, including:

Barry and I hope you will join us.  Click HERE for a link to the website, which also has shows featuring Sparta, Alexander the Great, and Egyptomania.  We will be doing a few shows monthly; the next one will discuss the historical evidence associated with the Exodus.

History Bytes can also be found on other social media platforms:

If it is successful enough, perhaps we can convince one of our favorite professors to try something similar?

Those of you unfamiliar with “Deadliest Warrior,” which uses computer simulations, medical analysis, and mock battles to determine which of two historical combatants would win when pitted against each other, might enjoy a clip from the show:

The Democrats are desperate for their race war. They are doing everything they can to stir one up. It would be their Reichstag moment.

Congratulations on the creation/launching of History Bytes. Sounds like a great idea and I hope it will be successful.

Wishing you all success. Tillich remarked once to an interviewer that whenever someone asks him about some contemporary or recent matter he habitually thinks back to what thinkers in previous eras had to say about the same matter in their day. From this habit comes great wealth and also detachment and calm.

Leslie, I think this is a great platform of learning for everyone. Please promote this to home schools groups in every state. I will do my best to promote it, as well.

History has brought us to today. We are factors of history as we are factors, to some degree of our DNA, geography, and in the end, the choices our parents made and, more importantly, the choices we make.

I was reminded of the import of history today when I read The Acts of the Apostles written by Dr. Luke. He recorded the first Ethiopian Christian conversion.

This Ethiopian, a Treasurer for Candace, had come to Jerusalem to worship Yahweh. Upon his return to Egypt he was met miracously by the apostle Philip, while he was riding in his chariot READING the prophet Isaiah, reading about the suffering Servant.

Philip explained all that had happened in the preceding days – the days of Jesus bringing the Kingdom of God to earth. The Ethiopian believed and was baptized.

The Ethiopian was reading history/prophecy when he came to the Truth.

I hope many others will do the same when they listen in to your History Bytes.