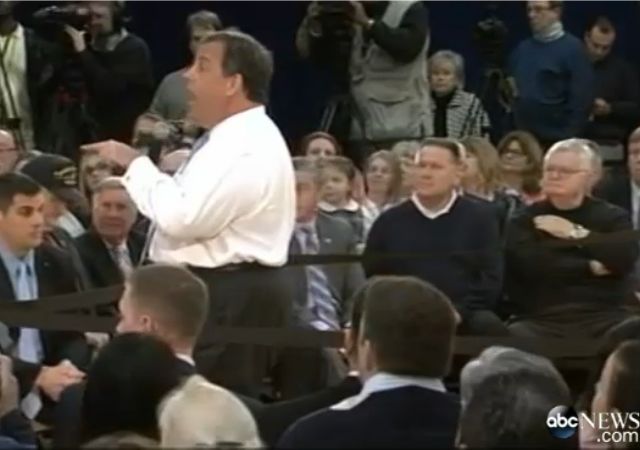 A handful of hecklers disrupted Chris Christie’s town hall meeting in Mount Laurel, NJ on Thursday, prompting the NJ Governor to fire back at their interruptions.

New Jersey Gov. Chris Christie’s town hall Thursday was repeatedly interrupted by what appeared to be a coordinated effort by hecklers, four of whom took turns shouting at the governor when other audience members tried to ask questions.

The first protester stood up about 35 minutes into the event and hollered at the governor from across the room about Superstorm Sandy relief aid.

After about half a minute, a fed-up Christie turned to the young man and tried to shut him down.

“Either sit down or keep quiet, or get out,” the Republican governor said. “Either one. We’re done with you.”

As the man continued to belt out his complaints, members of the audience booed and tried to drown him out. He was then escorted out of the room by police at the Mount Laurel event.

He was part of a group that told reporters they were from Rowan University in New Jersey, and they came to the event to hold the governor accountable, though they didn’t elaborate on their particular grievances.

Rob Duffey, a spokesman for the liberal group New Jersey Working Families, confirmed that at least one of the hecklers was affiliated with their group.

A second heckler, who interrupted another question from an audience member, blasted the governor’s administration and accused him of using tax dollars to hire “crooks and liars.” She was also escorted out by police, as were two other hecklers who tried to disrupt the event. The governor ignored all three.

In a more detailed video at ABC News, it’s difficult to hear from the footage what the hecklers are saying, but you can clearly see them yelling over other attendees who were already trying to ask questions of the Governor.

“One of the interesting things is that, I love, I really love youthful enthusiasm. I really do,” Christie said, as the crowd laughed. “And these folks who come in here today, ginned up for their own partisan purposes, see they’re getting exactly what they want because what happens is, they get taken out, they get attention and the press follows them out and then interviews them. Right? Which is exactly what they want. They don’t want an answer from me. If they wanted an answer from me, they’d wait to be called on and they’d ask their question and I’d give them an answer.”

[…] “People have watched my town hall meetings now 113 times. And I have had plenty of people who are angry with me and don’t like me, who I’ve called on.  Believe me, I didn’t call on them on purpose. I call on people randomly. Sometimes they like me, sometimes they don’t, sometimes they’re neutral. And when they yell and scream at me, you know, some days I sit and listen and take it and give a reasonable answer or response, and if I’m in a cranky mood some days I yell back at them and you’ve all seen this.”

Others who oppose Christie’s policies, including environmentalists, were also said to have been at the event but did not interrupt the Governor or other speakers.  The Star Ledger of NJ reports that some silently raised signs near the end of the event that read, “Don’t Frack Our Water.”

That report also referenced an individual who has disagreed with Christie on affordable housing issues, who referred to the interruptions as ‘disrespectful.’

Mike McNeil, the chairman of the housing section of the NAACP, said after the event that he had some disagreements with Christie over the way he has neglected affordable housing issues in New Jersey.

“I was a little upset because I did want to speak,” McNeil said. “We’re losing our affordability throughout the state of New Jersey. That’s part of the reason we’re creating these tent cities. You go out there and see working people.”

But he said the interruptions were uncalled for.

“It was disrespectful,” McNeil said. “I think they should have been like the rest of us, who raised our hands. Whether you disagree or not with the governor, he’s still our governor.”

In all, police escorted six people from the event, including four Rowan University students, according to the Star-Ledger.

Good on ya’ Chris Christie. Don’t engage them cus that’s exactly what they want, people like this just need to be ignored. Especially the Mom that had brainwashed her child into yelling with her.

Funny how these people are always liberals trying to shout down conservatives.

If somebody tried this on Obama I guarantee you it would be a front story on every major network for days.

And the story would read “Racist Conservative tries to shout down obama and disrupt a town hall meeting. News at 11.”

it’s even funnier because the Jersey Blob isn’t a conservative… just a RINO.

who cares what he says or what people say to him?

I agree. Chris Christie is a Libtard. I wish the news would stop promoting him for President.

The NJ gov doesn’t seem to have the magic anymore. The bridge pettiness, or maybe requiring NJ consumers to only buy a car through a dealership is the reason. You’ll notice, if you can ignore the first heckler, the first question was why property taxes were raised $2k on that single mom.

It was fun watching him take on the unions, but that was then.

Chris speaks for himself, not for me.

Governor Christie is not a conservative. He is a power broker with his own self interests. Heckling is disrespectful most times and I appreciate seeing Obama heckled when it is rarely reported. I also would be curious to see some sort of itemization of the Sandy relief monies. I have no doubt that the tribal warlords in that area received the majority of the funds.

Left wing thugs always make fools of themselves since the time they were practicing their thuggery in Brown Shirts.