Martha Robertson solicited money based on claim GOP tried to hack her website, but has dropped plans to hire a cybersecurity firm to provide proof. 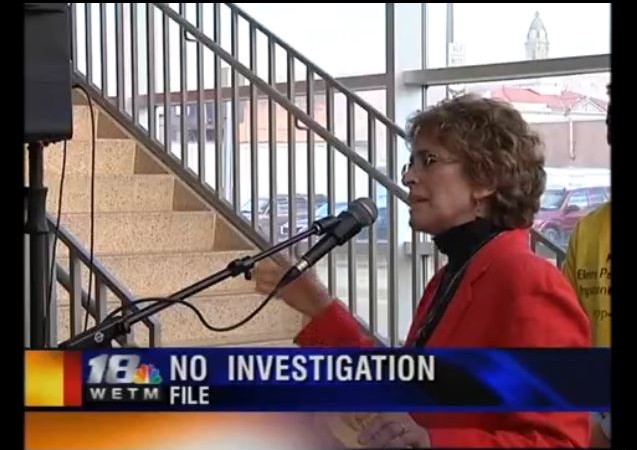 Ever since Legal Insurrection broke the story that NY-23 Democratic challenger Martha Robertson sent a fundraising email claiming that “GOP Ops” had been “caught” trying to take down her website, Robertson has been on the defensive.

The Robertson campaign has never provided any proof that GOP operatives attempted to hack her website and eventually was forced to back off that claim.  The website never was down, and the “hacking” claim likely nothing more than routine server problems.  A local Republican leader asked for an investigation by the FBI and U.S. Attorney’s office as to whether the Robertson campaign violated any laws.

During an interview with Roll Call, Robertson tried to deflate the controversy by promising to hire a cybersecurity firm to provide proof of the hacking:

“We’re working to hire a cyber-security firm to take a serious look at that and investigate everything that happened. Beyond that it’s really better to leave it up to them,” Robertson said. “At the end of the day I think … it’s beyond a distraction. [Voters] are concerned about their pocketbook issues — whether or not their Social Security and Medicare payments are going to be there as they depend on them.”

For months Legal Insurrection has been pressing the Robertson campaign as to whether it hired the forensic firm, but has been met with stone cold silence.  Nothing.  Not the courtesy of a response.

Now we know why.  Robertson never hired the firm, and has no plans to do so.

Via WETM, Robertson Will Not Hire Cyber-Security Firm to Investigate Hacking Claims

A local congressional candidate now says she will not be hiring a cyber-security firm to look into claims that someone hacked her campaign’s website….

After the campaign’s 4th quarter FEC filing came out, WETM looked at their expenditures. There was no indication the campaign had hired a cyber-security firm.

When WETM asked the Robertson campaign about the lack of any cyber-security related expenditure, campaign manager Jordanna Zeigler said, “We looked into the matter and found that there were 9 SQL Injection attacks on our website in a very short period of time. Since these attacks were unsuccessful, no police report was filed. We felt we had adequate protections and securities that did not require any further investment but we stand vigilant against any possible attempts to sabotage our campaign.”

We will continue to follow this story and to demand answers as to whether Robertson will apologize and return the money solicited on false pretenses.

Since the Fourth Estate has become a willing Fifth Column for anything animal, vegetable or mineral with a dash-D behind its name, a Democrat can literally get away with anything without scrutiny or challenge.

When any group or person gets away with wholesale intellectual dishonesty or blatant hypocrisy, can criminal activity be far behind? One only has to look around us to see the truth in that.

It all seemed to start when they told us that Bill Clinton just lied “about sex”. The camel is now squarely inside the tent, taking up the whole sofa and drinking our beer.

Not A Member of Any Organized Political in reply to TrooperJohnSmith. | February 8, 2014 at 1:56 pm

Lies and Democrats go together like a horse and……?

Martha, by chance have you met Wendy Davis?

Or Mayor Dawn Zimmer of Hoboken?

… to demand answers as to whether Robertson will apologize and return the money solicited on false pretenses.

God luck with that!!

Kind of reminds me of the Mayor of Hoboken NJ who made allegations about Chris Christie and then suddenly, when proven a liar, went silent. Fortunately for most Democrats all that is necessary is to make an accusation, let the MSM repeat it far and wide and them reap the benefits of a lie.

This only works mind you if people of ill will simply accept the lie to begin with. Sadly most will if the lie is about the other party. Pogo was right.

>>“We looked into the matter and found that there were 9 SQL Injection attacks on our website in a very short period of time. Since these attacks were unsuccessful…”

Unsuccessful means She Was Not Hacked.

More lies…….. from a Democrat Hack.

9 injection attempts “in a very short period of time?” Each of the sites I oversee get at least twenty times that every day. The internet is crawling with botnets that go up and down the street rattling the doorknobs (“Log in as ‘admin,’ password ‘password.’ Didn’t work? Shucks. On to the next.”) Also, I assure you that these attacks do not announce “I am candidate X and I approved this illegal intrusion attempt” in any fashion. If the originating IP matched that of a particular campaign headquarters, that might mean something, but they’re not mentioning that, so I’m thinking they’ve got nothing.

>> If the originating IP matched that of a particular campaign headquarters, that might mean something, but they’re not mentioning that, so I’m thinking they’ve got nothing. <<

She got something alright. With no evidence whatsoever, she created the impression in the mind of voters that her Republican rival is willing to resort to illegal acts to cause her campaign harm. Furthermore, she used the incident to milk her donors for money.

She was attempting to create a huge benefit for herself with the incident by using it to sully the reputation of the Republican AND raise money off the thing. It would have been a home run for her had she pulled it off. But Legal Insurrection helped turn what would have been a big win for her into a negative.

Here's how I score it: Blogger in pajamas 1. Unethical Democrat politician 0.

I suggest you consult your web hosting provider and ask how many SQL injection attacks the average website gets hit with on a regular basis. I think they are part of a very common wholesale strategy of fishing for vulnerable sites.

These attacks, if real, could easily have come from anywhere and anyone. I can understand why someone might be stricken with paranoia, but when one has no evidence, the proper thing to say is, “We were mistaken.” And apologize for the accusation.

if running wordpress (I have not checked her site) then 9 is a drop in the bucket.
due to its popularity there are tons of injection vectors out in the wild.

It’s beyond me why people keep voting for liars?