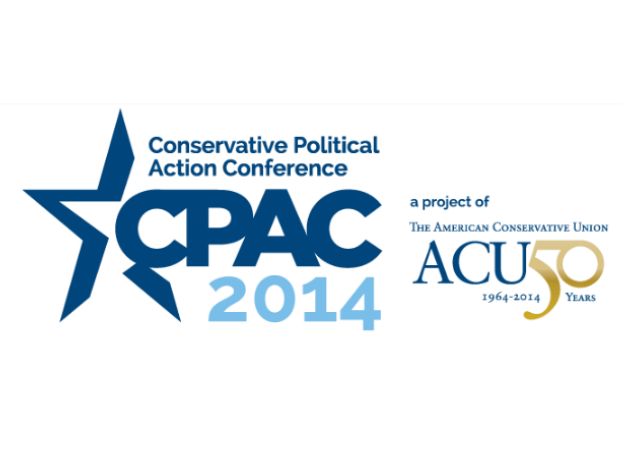 Today marks the opening of the Conservative Political Action Conference (CPAC), an annual event organized by the American Conservative Union.

The conference runs from today through Saturday, March 8th, so we’ll try to bring you some of the highlights from the event throughout the next few days.

No discussion of a oration, marriage, or any social issue that troubles the waters.

That should be .abortion”.

been working with nra media reps last 2-3 days as they asked me to live stream wayne lapierres speech at 215 on my site. not sure its polite to post link in this situation so I didn’t.
looks like theres a lot of interest in everything there, good.

You can contact Prof J to ask permission but I for one wouldn’t mind seeing the link.

It should be posted here around 2, Mandy and the Prof were very accommodating.

Whoever speaks to the greatest threat to the Republic: The disintegration of the Rule of Law…

How are we the tolerant party if we ban atheists and LGBTQ people from our conference?

How can Ukraine be a tolerant if they ban Russian troops from their country?

These people at CPAC are sliding into irrelevance. They just don’t get it. Atheists and the LBGTQ messed up crowd are they’re to undermine. They are not there to support.

I believe in God, in Jesus, in the Holy Spirit. Atheists not only want no part of that, they don’t want me saying that anywhere outside the home and church, and they will ignore the country’s history and tradition to deny believers the right to publicly confess and spread their faith in the public square. Because of atheists and their relentless persecution of people of faith, we have seen Satanism, of all things, asserted to be fit for a public monument in Oklahoma. On this, the atheists have stood silent though it was their war that emboldened the Satanist monsters to rear their ugly heads. In fighting against Judaeo-Christianity, the atheists have shown they are for Satanism because there is no middle ground. If you are not for God, then you are against Him, and that means you’re a Satanist, whether you acknowledge it or not.

The LBGTQ crowd are just like the atheists, but with a twist. They want a god made after the imagination of their hearts, one who will not condemn what they do. Initially, they wanted tolerance; now they, like the Muslims, are demanding total subjection. If you do not bow down before their profane altar you must die. If you do not reject Scripture’s teachings on homosexuality, on marriage, on human sexuality, on the being and nature of God, then you must be silenced and condemned.

Inviting these two groups into CPAC, without a concomitant rejection of their agendas, is paving the way for the GOP to be just like the Democrats.

If the choice is some pantywaists tolerance or death for the rejection of these two groups, then, by far, death is preferable.

It’s a reasonable point that we have to get the votes to govern before changes can be made.
But we have to be careful.

I am old enough to remember when Repubs had the Presidency, Senate and House all at one time. I did NOT see the changes that need to be made. I didn’t even see a good push in that direction.

I’m old enough to remember when the republicans controlled the House, in which all spending originates, and the spending and deficits skyrocketed.

I find it extremely telling that on the Twitter feed there are literally more liberal trolls spamming and spewing hate and blatantly false 1-liners and memes than there are people actually discussing anything happening at the conference.