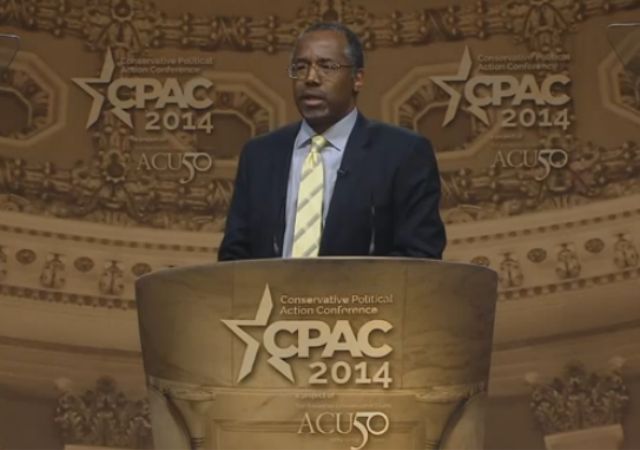 Retired neurosurgeon Dr. Ben Carson took the stage at CPAC Saturday, where he focused on a number of issues.

Carson opened by speaking about his dreams as a child to become a physician and the amazing opportunity his career path provided for him, saying “…because we live in a land of opportunity, because I had a mother who was ‘no excuses,’ and because I believe in God.”

He quickly launched into the topic of political correctness.

Carson continued to address other topics, including the need to reach out and encourage others to vote.

In concluding, he spoke about remembering that people have sacrificed so that we could be free.

“The next time you sing the national anthem and you get to the end of that first stanza and it says ‘the land of the free and the home of the brave,’ don’t just let those words roll off your tongue. We must remember that we cannot be free if we are not brave.”

Watch the full speech below (intro goes until about 4:00).

the Sat night race card could deal with the vitriol he got today.

He has several, shall we say liberal ideas.

he sounds like a pretty smart guy, and gives a good speech, but he’s currently into gun control too, so he can either come to Jesus on the issue or go to hell. we have enough RINOs already.

and it’s a deal breaker with more people than just me.

If you are willing to compromise or regulate one right you’re willing to do the same to ALL rights. His stance on the second amendment and amnesty provide ample proof that while he may be conservative in some ways he is liberal where it counts.

Dr. Carson is a very good man, with a strong faith, and that drives the political left as crazy as it does with Sarah Palin and Ted Cruz.

The differences are obvious though. They cannot attack his education, his philanthropy, his, dare I say it….nah.

I would rather he be in the White House than any who have served since Ronald Reagan. If we had just stayed the course Regan had charted, we wouldn’t be in the position we are in today. I blame the Establishment GOP and the progressive left for the shambles we find ourselves in today.

A man MUST, *MUST* be guided by proper moral principles (i.e. Good = good, and bad = bad, not Good = bad, and bad = good as it seems to be the case today) in order to lead a democratic republic into greatness.

The list of potential candidates for 2016 is small, but at least I know Ben Carson is more qualified than a lot of what the media would push on us.

American culture was still at a point where it and Reagan were in sync. Not so much any more. I’ve come to believe that Mark Steyn has it right – politics can’t fix culture. Until the Ben Carsons of the world can favorably influence the culture to once again respect the family unit, self-reliance and race-indifferent opportunity, elections won’t matter much. We currently live in a modified thugocracy, where the rule of man is slowly gaining leverage over the rule of law, all the while being praised as progress. By many who should know better.

why should they know better?

right now they’re benefiting from the situation, so what’s their impetus to change or even notice things?

Carson is a great doctor but an amateur politician. Our nation is in too much trouble for us to muck around electing amateurs to replace the current amateur who is screwing is over royally. We don’t have time for another person needing on the job training. We must have someone who not only knows what she believes, but knows how to get things done to right the ship of state. Ben Carson is not that person. Sarah Palin is.

as i mentioned elsewhere, my issues with the good doctor are based on his uninformed 2nd Amendment position.

now, since it’s difficult to become a thoracic surgeon w/o being able to learn or adjust your knowledge base, it’s possible he could be made to see the error in his ways but, until then, he’s just another squish with a few good ideas.

Ben Carson seems like a stand up man.
However, he supports amnesty for undocumented dimocrats and does not support the 2nd amendment. Too many rinos already in our government that do not support our Constitution.

Seems like a nice guy, but telling us to bow down and pull the GOP lever for whomever the nominee turns out to be is a deal breaker. We’ve had to do that since Bush I and it’s been a disaster. (Yes, Bush II was a disaster…better than Gore or Kerry, but a disaster.)

I didn’t think he’d run, but his speech had the markings of a man with his toe in the water. He hit the big issues, suggesting he’s well-rounded and qualified. But, hey, my neighbor’s birch tree is more qualified to be President than Obama, so the bar has been lowered for the foreseeable future.