You couldn’t keep your doctor under Hillarycare, either

You couldn’t keep your doctor under Hillarycare, either

or your Plan: “I am very worried about getting skewered for over-promising here”

There was a massive document dump of Clinton White House files. The Wall Street Journal has a Live Dive as to what’s been found so far.

So far it seems the document getting the most attention is one in which those involved in planning Hillarycare admitted internally there was no honest way to promise people they could keep their doctor and their plan (h/t @ByronYork)(emphasis in original):

We have a line on p.10 that says “You’ll pick the health plan and the doctor of your choice.” This sounds great and I know that it’s just what people want to hear. But can we get away with it? Isn’t the whole thrust of our health plan to steer people toward chaper, HMO-style providers? It’s one thing to say we’ll preserve your option to pick the doctor of your choice (recognizing this will cost more), it’s quite another to appear to promise the nation that everyone will get to pick the doctor of his or her choice. And that’s exactly what this line does. I am very worried about getting skewered for over-promising here on something we know full well we won’t deliver.” 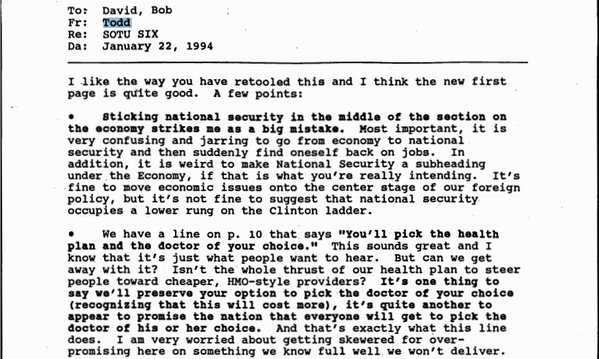 Oopa ! ( old Greek expression, as they throw plates and cups down to see them break ).

Not wanting to get skewered for over promising????? Well, it isn’t a promise if the intent is to deceive. It’s called a big, fat LIE!

It is sometimes referred to as a “false promise.”

Note that she does not ask “is the promise truthful?” but “can we get away with it”?

With Dims, it’s always about how far they can go in screwing Americans over. Hillary had to worry about potential blowback from the media once her false promises were exposed. Obama had no such concern.

What difference does it make now? Well, quite a big one, dear.

Question: “But can we get away with it?”

Answer: With liberals, yes. With anyone that can actually think, no.

But most importantly, Hillary gets to keep HER doctor.

Apparently (per the news) she’s had some health issues. I hope it goes well for her, I certainly don’t wish her ill — but can you imagine how she’d react if someone took her medical team away from her?

This is, remember, the woman who screamed at Arkansas state troopers and Secret Service agents to carry her bags off the plane and from the car.

She’s been ‘entitled’ most all of her adult life since graduating from law school. Of course she’s going to have HER health care.

I’ll believe the pols are really serious about health care ‘reform’ when I see a line of pols in the Cook County Hospital ER, each waiting patiently for their turn to be seen.

You know, that’s what I don’t understand. Even the lowest of low-info voters should be able to get the message: if the chefs refuse to eat their own cooking, then maybe, JUST MAYBE, there’s actually seriously wrong with it.

Make the legislators eat their own cooking. If whatever they whip up isn’t good enough for them, then it’s madness to let them force us to eat it.

That is a compelling analogy.

I have said many times HMOs were a big problem. They are exactly why most of the doctors who were allegedly fired from United Healthcare. They didn’t want the HMOs. I remember when I first saw the HMO in the 80’s. No one wanted them because you couldn’t even book a doctor’s appointment.

I’m surprised they’re worried about “being skewered”. If Obama has taught us anything, it’s that there will be no consequence of any note when a liberal politician lies.