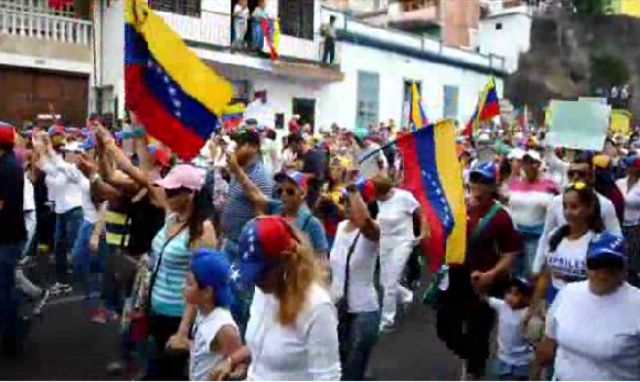 Both opponents and supporters of President Nicolas Maduro took to the streets in Venezuela on Saturday to participate in competing rallies, after days of unrest.

Venezuelans on both sides of the nation’s political divide took to the streets on Saturday after nearly two weeks of mass protests that have President Nicolas Maduro scrambling to reassert his leadership of this economically stricken country.

In Caracas, tens of thousands of opponents of President Nicolas Maduro filled several city blocks in their biggest rally to date against Maduro’s 10-month-old government. Across town, a mostly female crowd of government backers gathered in T-shirts and baseball caps, forming a sea of red — the color of Maduro’s Socialist party.

The dueling protests capped a violent week in which a government crackdown jailed hard-line opposition leader Leopoldo Lopez and dozens of other activists. The violence also left at least nine people dead on both sides and injured at least 100 others.

Venezuelans woke up Saturday to smoldering barricades of trash and other debris in the streets of some major cities, but there were no reports of major violence. Protesters have called on Maduro to either resolve problems such as rising crime and galloping inflation or step aside.

Maduro meanwhile has been highly critical of the United States and media organizations over the course of the crisis.

Early Saturday, Maduro said remarks by US Secretary of State Kerry hours earlier on the unrest gave violent groups a “green light” to carry out attacks, slamming the top American diplomat’s words as “arrogant” and “insolent.”

Maduro, who denies any links to armed groups, maintains that the protests are part of a “coup d’etat in development” instigated by Washington and conservative ex-Colombian president Alvaro Uribe.

Kerry had condemned Venezuela’s “unacceptable” use of force against anti-government protesters, and declined to respond to a call from Caracas for bilateral talks.

“The government’s use of force and judicial intimidation against citizens and political figures, who are exercising a legitimate right to protest, is unacceptable and will only increase the likelihood of violence,” he said in a statement.

Maduro’s testy response came a day after he challenged Obama to meet him for talks and offered to return an ambassador to Washington.

Venezuela and the United States have not exchanged ambassadors since their respective envoys were withdrawn in 2010. Venezuela has expelled eight US diplomats over the past year, including three on February 16.

On Thursday, Maduro had also initially warned journalists with CNN to get out of the country if the outlet did not rectify what he called its “war propaganda” coverage.  But he reversed that decision a day later and said that CNN could stay and continue reporting.

Venezuelan President Nicolas Maduro told a CNN reporting team Friday that it could continue reporting in the South American country, a day after the government revoked or denied press credentials for CNN journalists.

Earlier, Maduro had said he would expel CNN if it did not “rectify” its coverage of anti-government protests. During a news conference aired live on state-run TV, Maduro reversed his early position, saying CNN could stay.

Following the more than two-hour news conference, officials told CNN that its journalists would be issued credentials to report within the country.

It was a bizarre end to the news conference that saw Maduro call out CNN, Fox News and other U.S.-based media, claiming they encouraged opposition forces against the government.

Maduro is proving once again that Western media, especially television, isn’t so much invested in bringing true information as in bringing visuals that can engage viewers and readers. By throwing out some media crews and threatening others, he is ensuring they will minimize their coverage of his failing regime.

The only way the plan could fail is if he were a Republican and pro-American, then the media would demand access and bleat loudly until it was granted.

Of course, our media’s natural affinity for socialism and Chavez’ regime also encourages them to offer minimal coverage since they hate to expose the flaws in the ideology they espouse themselves.

Witness: the Seattle Times picks up the AP article and chortles over the cutesy-wootsy ‘dueling demonstrations’, never for a minute examining the parallels with Ukraine. Kiev gets heavy coverage and dramatic photos, Caracas a few perfunctory paragraphs.

Apparently, the virtues of authoritarian ‘socialism’ excuse the shooting, the media-suppression and the court-packing, while palace-building thugs like Yanukovych and their photogenic rivals merit more attention.