Marco Rubio tries to put spotlight on the conflict 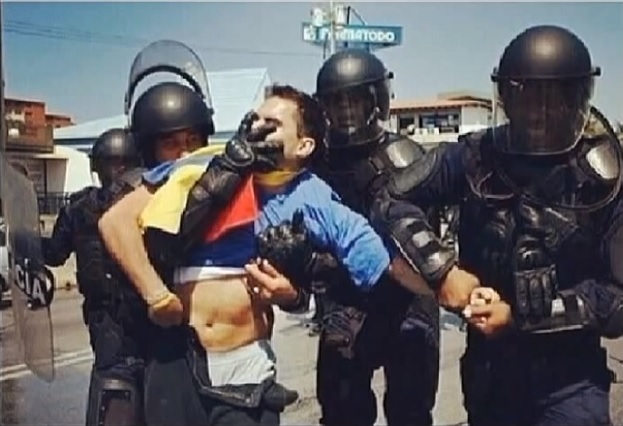 On Sunday, Florida Senator Marco Rubio took to Twitter to draw attention to the deadly street protests in Venezuela.

The tweet links to a powerful youtube video titled “What’s going on in Venezuela in a nutshell (English version),” where a Venezuelan woman living in America explains the current anti-government protests and government backlash.

The video depicts photos and footage of the violent scene in Venezuela.  At the end of the video, the woman narrator concludes, “If you are human, and want to share the truth, please, share this video.”

Over the past week, Venezuelan protesters have been fighting against corruption in the government, high inflation, and a high murder rate.

On February 12th, at least three people were confirmed to have been killed during anti-government protests by “armed vigilantes on motorcycles.”

As result of the growing unrest among the people of Venezuela, the government has censored news and Twitter images.

Instead, Maduro has said he will not let the protesters who call for his resignation cause chaos. According to Reuters, “troops have fired teargas and water cannons to clear about 1,000 protesters who lit trash bonfires and threw stones in an affluent part of eastern Caracas.”

But the protests are not receiving substantial media coverage, as Instapundit notes, even though Cuba training armed government groups attacking and killing protestors in Venezuela:

There is a very good reason Cuba’s Castro dictatorship is on the U.S. State Department’s list of States Sponsors of Terrorism. As the report and video below clearly show, Cuba’s repressive apartheid regime is training armed groups in Venezuela in the terrorist black art of repression, torture, and murder. This dark and bloody art is being put to use by Venezuela’s puppet dictatorship, which takes orders directly from Havana and has for the last week been attempting to quash mounting protests with violence and lethal force.

Anti-American thugs beating people up just doesn’t get the attention of the U.S. media, particularly when they are communists.

One would never suspect such a crisis is currently going on in Venezuela, to look at the homepages of CNN, Fox, CBS, and ABC News.

Instead, the games in Sochi dominate the homepages.

One can only hope that other public figures will take Rubio’s lead, and promote knowledge of the important on-going events in Venezuela.

Whew! For a moment there, I thought she was talking to the American media. Whew! They dodged that bullet.

Why won’t the U.S. media cover this, and why are they not shaming Pres. ScamWOW over his tooth-sucking silence?

It isn’t part of the narrative.

This is THEIR dictator, with THEIR system.

We’re getting there. The only solace in our final arrival will be to watch our reporters get lined up and shot.

When I first read the subtitle: “Marco Rubio tries to put spotlight on the conflict”, I thought it was a caption to the photo and it was Rubio getting his face mashed, lol.

Venezuela has been under heavy siege from drug traffickers for at least 7 years . The central rural villagers have been forced out & decamped to cities .

Iirc there is a route across the mountains through to a port ( giura? ) that is favourable for drug trafficking to Europe. They can pass around Grenada & Tobago waters who are just interested in isolating themselves from imports. They don’t gave the resources to do europe’s drug apprehensions.

Whilst everyone was wailing about the cancer / dead socialist , the real stuff was happening . I doubt there is a level of government not tainted including the toilet paper distributors.

What’s the problem? They mean well….

Joe Kennedy and RFK, Jr. would sell their souls to achieve their socialist dreams of power.

It seems the plan it to sell OUR souls.

The events in Venezuela portend our future here in the USA if el Presidente Obama has his way. I had often felt that our military would never turn against us but the way Obama has hamstrung our military and his removing selected commanders leads me to wonder whether that is still true. We know that DHS has built up its paramilitary structure, that the SEIU folks are more than willing to be Obama’s civil militia, perhaps his purple shirts. My guess is that DHS’s paramilitary units and SEIU are more than willing to step forward on command.

The Venezuelans deserve our support if only because we might, and soon, need moral support from them in return.

If Obama were simply a run of the mill politican, I would not feel this way. Yet, Obama himself has continued to proclaim that his goal is to radically transform the USA and he certainly seems well on his way of doing that beyond what many of us thought was possible. Look at Obama’s actions as steps taken to achieve his goal, ignore his spoken words because, after all, as he himself has said, often, “…they’re just words!”

Lastly, some say that “Obama couldn’t mean that” or that his intent is pure! Well, ignore those feelings and look at the facts of what his actions have been, those are what is important, not our feelings or our desires to get along!

Either we stand for our Constitution, as a statement of what we are as a nation, along with our other founding documents or we stand for nothing.

The leftists and communist outsiders have spent decades cleaving off segments of the citizenry from our constitutional belief system. “We” still have two thirds that think DC is too intrusive, but DC is in the grips of unions and big money. DC is becoming a PC theocracy, with cult leader Obama enriching all his minions, and Hollywood/media heralding the glorious leftist way.

Many prefer “Free Stuff, Let private enterprise Die” to “Live Free of Die”. But “Live Free or Fight” seems less passive. 10,000 Lois Lerners haver been stealing our freedoms and elections for a long time, which is maybe more insidious than the violence in the streets.

Venezuela, a presage of American life under a Progressive “Lean-Forward-Do-As-I Say” Regime.

One report I read says Argentina has inflation of 25%, another said 60%. Either way, it’s impoverishing and makes the government unstable.

All three countries – Venezuela, Argentina and Brazil have taken hard left turns in recent years and now are suffering the consequences. The dominoes are lined up.