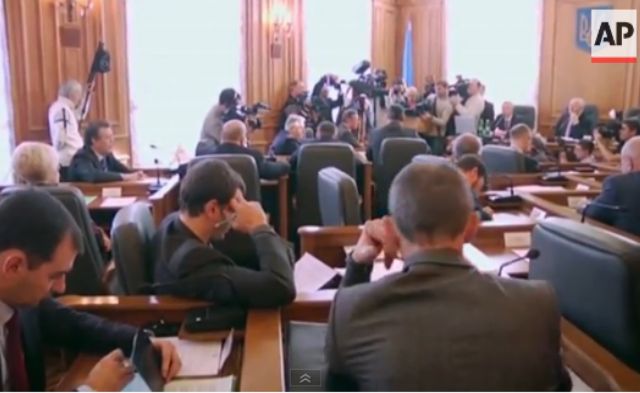 An early morning report from Reuters on Thursday indicated that Ukraine’s parliament has agreed to try and work on a joint bill on constitutional amendments.

The parties in Ukraine’s deadlocked parliament agreed on Thursday to try to draft a joint bill on constitutional amendments that could be put to a vote as early as next week, the speaker said.

Opposition leaders, backed by protesters in the streets, want a return to a constitution enacted in 2004 that would move substantial powers over the government from the president to parliament – a proposal rejected by President Viktor Yanukovich and his supporters, who have had a majority in the legislature.

Speaker Volodymyr Rybak, from Yanukovich’s Party of the Regions, said leaders of the parliamentary groups would meet in committee with himself and representatives of the president with the aim of producing a bill within the next few days.

Constitutional reforms have been a key demand of the protesters in Ukraine.  But as Reuters notes, whether or not a consensus can be obtained is unclear.

Meanwhile, Yanukovich returned Monday from a brief sick leave.  He is expected to name a new prime minister, after Mykola Azarov resigned last week in an effort to appease the protesters and opposition.

Someone call Ruth Bader Ginsburg, right away and give her a heads up … some silly fools out there are writing a Constitution and they’re modeling … wait for it … the American Constitution. Shameful.

They will probably end up federalizing the country as a way of working around linguistic and cultural divisions. Hard to say what will happen, but this is a likely scenario.

I guess I’m more optimistic than “edge”. Seems that Yanukovych has made even a lot of easterners mad with his brutality and self-dealing.

He’s not particularly popular, and deservingly so, but he’s not ding that shabby for a sitting Ukrainian president (compare him to Yushchenko in his last days).
“A lot” in the east are also convinced that they are repelling a minor Nazi invasion.
Plus, don’t underestimate regional pride. Kharkiv, for instance, always compared itself to Kyiv; I’m sure they’d love to be the capital of East Ukraine.

Note the taped ( diplomatic line ? )directives released of Victoria Nuland to Us official . It’s not that she said F*** the EU but the ( always ) obvious American putschko Klitchko.

The EU works in more subtle ways entangling a nation with initial subsidies & attractive offers . However it is impossible to exit . Some years down the track they offer a formal acceptance referendum & they keep holding them until they get the result they want which is yes yes please.

The Ukraine still has to fund itself , something it has not been able to do ever. No amount of paper constitutions will magically bring this about.

Also a unicameral state is a temperamental outfit. Good things can ne legislated quickly but on another day they can be just as swiftly. Taken away.

If they go for a federal system they will have to give up this central power . The Ukraine may do much better in smaller units ( Russia has always had autonomous regions ) . Ironically they may need to resurrect some of the old Soviet administration units.

Ukraine fell into the decentralized pattern after the breakdown of the Soviet Union. It might be just too decentralized given the drastically different historical and cultural aspects.
In Russia, on the other hand, Putin appoints the governors. If Putin were to simply annex parts of Ukraine, I don’t think the population would want to go under his boot, not at this point,at least, but the east would likely welcome a formation of a federation.
As far as the old administrative districts… Russian speakers are already talking of the radical west as Galicia, a historic pre-Soviet term. Makes sense. Anyhow, keeping Ukraine as one and western-oriented is a difficult proposition.