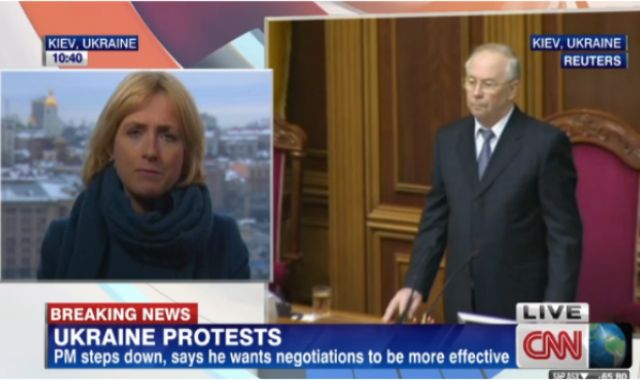 The prime minister of Ukraine resigned on Tuesday in an attempt to help ease tensions after two months of protests and recent violent clashes there.

Ukrainian President Viktor Yanukovych accepted the resignation of Prime Minister Mykola Azarov and his government Tuesday, amid a political crisis fired by violent protests on the country’s streets.

Azarov and his Cabinet will continue in their roles until a new government is formed, a notice on the presidential website said.

Yanukovych’s announcement comes only hours after Azarov submitted his resignation and as the national parliament meets in a special session aimed at ending the crisis.

Throughout the course of demonstrations, opposition leaders and protesters have repeatedly called for the resignation of Azarov as a key demand.

Over the weekend, the Ukranian president had offered the post of prime minister to a top opposition leader, Arseniy Yatsenyuk.  That offer was rejected by Yatsenyuk, who later tweeted, “No deal @ua_yanukovych, we’re finishing what we started. The people decide our leaders, not you.”

In another concession to protesters, the Ukrainian parliament also voted Tuesday to repeal much of a recently passed package of laws aimed at restricting protest activities.

In the morning session of Parliament, which began with a moment of silence for those who died last week, lawmakers repealed nine of the 12 restrictive laws that had been passed on Jan. 16 by a show of hands, without debate. Outrage at the limits the laws imposed on free speech and assembly in the country sparked the violence on Jan. 19.

The repeal vote on Tuesday was conducted more formally, with 361 votes recorded in favor of repeal in the 450-seat chamber, including the Party of Regions, Mr. Yanukovych’s party.

The laws had specifically banned tactics adopted by the opposition in the protests. For example, a provision banning the driving of cars in a column of more than five was aimed at a group called AutoMaidan that had taken to protesting by driving through the capital in large, honking caravans.

In a compromise, members of Parliament, including those from opposition parties, also voted to approve more limited versions of some of the repealed restrictions. For example, a provision to make destroying monuments a criminal offense was reinstated, but with the specification that it covers only monuments to fighters against fascism, like the World War II statues that are ubiquitous in Ukraine. It no longer applies to statues of Lenin, like the one toppled by protesters in Kiev in December; the Svoboda party has called for dismantling all of Ukraine’s Lenins.

But reports indicate that today’s developments may not necessarily appease the opposition and protesters.

This is “not victory but a step to victory,” opposition leader Vitali Klitschko said of Azarov’s resignation, according to AFP.

Klitschko also spoke of other issues that opposition leaders and protesters still want to see addressed.

Vitali Klitschko, leader of the opposition Ukrainian Democratic Alliance for Reforms party, or UDAR, told reporters at parliament that the repeal of the anti-protest laws was a small but very important step.

Much remains to be done, he said, according to his party’s website. “Today, we still have to consider a very important issue on the amnesty and release of all detained demonstrators,” he said.

“It is also crucial to address the question of the constitutional reform, which will divide powers between a President, a Prime Minister and the Parliament.”

Parliament is considering legislation that could offer amnesty to protesters who have been arrested during the unrest, but this remains contingent upon protesters vacating any currently occupied government buildings.  Euronews reports that a vote on this has been delayed until Wednesday.

They are fools for destroying statues ( maybe precious bronze ) of Lenin when they could be sold to any number of American cities for a fortune .

Svoboda is very Soviet. They want the return of ethnicity line in passports.
Azarov was a disgrace. He never bothered to learn Ukrainian, but occasionally attempted to speak it. Hilarity ensured.

You know enough Ukrainian to know when it’s being spoken badly? Or are you taking other people’s word for it?
BTW, I think you meant “ensued”, right?

You didn’t answer the question. I’ve only known one Ukrainian Jew who spoke Ukrainian; that’s why I asked.

“It is also crucial to address the question of the constitutional reform, which will divide powers between, a President, a Prime Minister and the Parliament” Sort of sounds like our “We The People” document, Executive, Legislative and Judicial…Mr. Obama take note? This is coming from a country with deep Marxists roots. The People have the right to decide there destiny…not you the government. Even in the Ukraine…