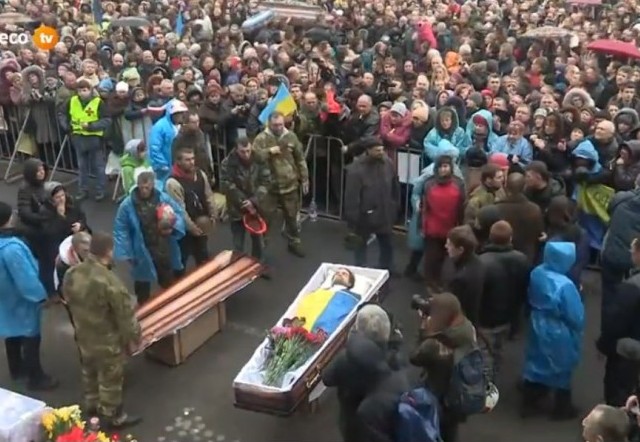 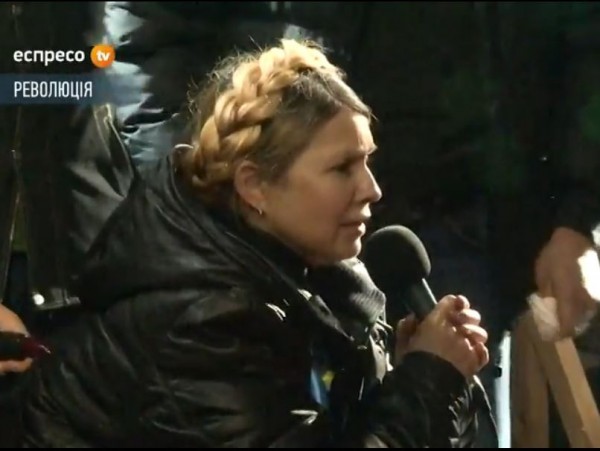 The President of Ukraine has fled Kiev but it is unclear if he has resigned. (UPDATE: Refuses to resign, calls protests a facsist coup d’etat.)

Kiev is in the hands of the opposition, and government security forces have vowed to stay neutral, reports Reuters:

The heads of four Ukrainian security bodies, including the police’s Berkut anti-riot units, appeared in parliament on Saturday and declared they would not take part in any conflict with the people.

They represented the paratroop unit of the military, the Berkut anti-riot police, Alfa special operations unit and military intelligence. The Interior Ministry had already signalled its allegiance to anti-government protests under a new minister from the ranks of the opposition.

The former Prime Minister and key opposition leader (background here) is to be freed from prison, via Sky News:

Jailed Ukrainian opposition leader Yulia Tymoshenko is set for release as part of political decisions taken at an emergency session of parliament in Kiev.

Initial reports claimed she had already been freed, but these were later clarified by aide Natasha Lysova who said the parliamentary decision meant she must be freed immediately.

In an ominous sign, reflecting that there are anti-Semitic elements in the opposition (as we previously noted), the Chief Rabbi of Ukraine has urged Jews to flee, as reported by Haaretz:

Ukraine’s chief rabbi, Rabbi Moshe Reuven Azman, called on Kiev’s Jews to leave the city and even the country if possible, fearing that the city’s Jews will be victimized in the chaos, Israeli daily Maariv reported Friday.

“I told my congregation to leave the city center or the city all together and if possible the country too,” Rabbi Azman told Maariv. “I don’t want to tempt fate,” he added, “but there are constant warnings concerning intentions to attack Jewish institutions.”

Edward Dolinsky, head of the umbrella organization of Ukraine’s Jews described the situation in Kiev as dire, telling Maariv “We contacted Foreign Minister Avigdor Lieberman requesting he assist us with securing the community.”

'I'll be fighting Jews and Russians till I die': Notorious right-wing militants aiming for power in #Ukraine http://t.co/Nls3TniNgd

YANUKOVICH SAYS HE IS NOT RESIGNING pic.twitter.com/f2m2fs6eIj

Moscow has been prepping its secessionist activities in Kharkiv for some time, as I reported 3 weeks ago: http://t.co/SCyLDNeWpr

#maidan protest attacked in Crimea, a sign of how Ukraine's divisions could lead to conflict via @shaunwalker7 https://t.co/TnpEw2Axtk

Thanks for the live feed link and your informative post.

I find this so confusing – the reporting on this is horrible. The “opposition” is anti-Russia, and wants to have free trade and connection with the EU; however, they are anti-semitic? Is that correct?

The President and current leadership are pro-Russia and wish to re-connect with Putin’s version of a “free Russia,” but they are supporting the Jews? Is that assessment correct?

Are the Jewish people in Kiev and Ukraine under threat from both entities? What would happen if, indeed, the current President proposes to split the nation? How would that affect the Jewish population in Ukraine?

I wish journalists would do their job, and that the talking heads on TV would dedicate particular hours each broadcast day to reporting world, national, and regional/local news, rather than bloviating on and on and on about anything but news.

As Rush says, it’s all a big soap opera, not news, on broadcast TV.

With riot police gone, Kiev is probably in the hands of paramilitary forces of neo-Nazi Svoboda and Pravyy Sektor. Svoboda doesn’t technically want EU membership, but likes to play EU against Russia So yeah, pogroms are a real threat. Also, they have very Putinist ideas about homosexuality. Lovely people. They are going to be Merkel’s headache.
Kharkov, by the way, was a historic eastern destination for Jews escaping pogroms. It was technically outside the Pale, but it was easy to get an exemption to live there, and the wealthy Kharkov Jews supported the newcomers. Russians and Ukrainians in the area were mellow; nobody bothered with a pogrom. IIRC at the beginning of WW2 something like one third of the city was Jewish. They now have a Jewish mayor — and a lot of anti-Semitic materials online are aimed at him. He’s a crook like all the rest of their political establishment, to be sure, but that’s not the point of agitation.

A good website with ties to anti-Putin Russian opposition of Russia:

From the Russian side:

One problem with Putin’s opposition is that the liberals there allied themselves with Nazis (because how else are they going to topple Putin?). All they care about is toppling Putin and his puppets. Like I said before, this is not going to end well.

I’m going to assume you mean Bukovyna, which once belonged to Romania. Zakarpattia was Hungarian.

This is the reason Mikulski et. al. want kill switches on cell phones, and little will convince me otherwise.

If a president is impeached, the issue of his resignation is moot, yes?

Unanimous vote. Well, people know who the losing side is here. Question becomes how many heads roll from here.

The President of Ukraine has fled Kiev but it is unclear if he has resigned. (UPDATE: Refuses to resign, calls protests a facsist coup d’etat.)

Umm, sir, isn’t one totalitarian as good BAD as the other, you know, like Stalin, Hitler, Mao, Pol Pot, Castro, et al