February 2, 1982 was the reported beginning of the siege of Hama, the biggest massacre in Syria; until now. 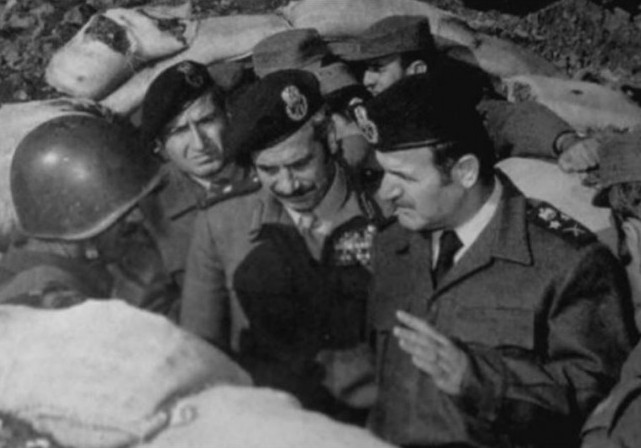 Thirty two years ago yesterday, February 2, 1982, Syrian President Bashar Assad’s father, Hafez, began an assault on the city of Hama to put down a Muslim Brotherhood revolt against his regime. Two years ago NPR recounted:

The facts of that event are well-known, but the photographic evidence has been scant. Then, Syria’s branch of the Muslim Brotherhood led an uprising centered in Hama, a central city of around 400,000.

In response, President Hafez Assad, the father of the current president, ordered 12,000 troops to besiege the city. That force was led by Hafez Assad’s brother Rifaat. He supervised the shelling that reduced parts of Hama to rubble. Those not killed in the tank and air assault were rounded up. Those not executed were jailed for years.

To this day, the death toll is in dispute and is at best an estimate. Human rights groups, which were not present during the slaughter, have put the toll at around 10,000 dead or more. The Muslim Brotherhood claims 40,000 died in Hama, with 100,000 expelled and 15,000 who disappeared. The number of missing has never been acknowledged by the Syrian leadership.

As we know the lessons of the father have been well learned by the son. Kill enough people and no one will make you pay a price.

Somehow the UN and Secretary of State John Kerry thought that they could get some sort of agreement to stop the killing in Syria. The latest round of talks ended on Friday, apparently in failure.

Secretary of State John Kerry and Foreign Minister Sergey V. Lavrov of Russia raised expectations in January at a joint news conference in Paris that a way would be found to open humanitarian aid corridors and possibly establish local cease-fires in Aleppo and other cities and towns.

But to the dismay of the United Nations and other humanitarian organizations, even those basic steps proved elusive.

“While the discussions continue to try to find a political solution to the crisis, ordinary men, women and children are dying needlessly across the country, and others are desperate for food, clean water and medical care,” said Valerie Amos, the United Nations chief aid coordinator. “The situation is totally unacceptable.”

Dismay? Really what was the UN expecting? Once any credible threat of force was taken off the table what incentive did Syria have to listen to diplomacy? And why in the world would anyone expect diplomatic progress to take place if Russia was there to protect the Assad regime? Furthermore, the administration made a big deal of withdrawing an invitation to Iran to participate in the Geneva 2 talks, because Iran didn’t accept the principles of the Geneva Communique from 2012. Since one of those principles was a transition from Bashar Assad, Syria didn’t accept the principles either. Dismay is the wrong word here. The failure of these talks was all too predictable.

Since the Geneva 2 talks started, Syrian Observatory for Human Rights reports that over 1800 people have been killed in Syria:

At least 1,870 people died across Syria during the first nine days of the “Geneva 2” peace negotiations that began in Switzerland on January 22, the Syrian Observatory for Human Rights said on Friday.

The Britain-based monitoring group said more than 470 of the dead were civilians, including 40 people who died from inadequate access to food and medicine in areas besieged by government forces.

The Syrian government continues to use its crude “barrel bombs” to strike at civilians.

In Aleppo, the raids with barrel bombs, as the crude weapons are known, have flattened residential buildings, forcing defenders to flee and allowing government troops to advance.

The latest attacks killed 13 people in the Bab area of Aleppo, Hassoun Abu Faisal of the Aleppo Media Center said via Skype. The Syrian Observatory for Human Rights, an opposition group that tracks the war from Britain, corroborated the information.

The blasts badly damaged buildings and caused a fuel tanker to explode, setting nearby vehicles alight, including one carrying a family of eight who were trying to flee the area as they heard the approaching helicopters, said Mr. Abu Faisal.

With no fear of failing to keep its chemical arms commitment, Syria has actually shipped out less then 5% of its stockpile, earning a stern (and meaningless) warning from Secretary of State Kerry.

In an escalation of U.S. threats, Kerry said that if Syria breached its commitment to hand over the deadly chemicals for destruction, the issue would be considered by the Security Council under the provision of the U.N. Charter that can authorize the use of force. …

But Russian officials rejected the suggestion that the Security Council would consider the use of force. They said they accepted Syria’s explanation that it had been unable to ship the chemicals to the Mediterranean port of Latakia for removal because of security threats from opposition forces in the country’s civil war.

Russia won’t even support the United States on an agreement that it co-sponsored!

Assad, like his father, will keep killing. The biggest difference is that father was able to hide his crimes; the son benefits with the help of accomplices like Russia and Iran combined with the feckless diplomacy of the West.

Well, the more Al-Qaeda that Assad kills means fewer that Israel will have to target. It’s to bad that the “freedom fighters” decide to hide amongst women and children, but what can be expected from such murderers?

Perhaps if some of the human rights activists went into the war zone and separated the wolves from the sheep the war could proceed more smoothly.

Unfortunately, in that part of the world and among Muslims, the Assads are not anomalous, with respect to mass killings. When your religion teaches that life has no value, that you can take a life for some obscene concept of honor, and that you can make cash payments to the family of the deceased rather than pay a personal penalty, well, mass killings become a shrug. Kill the person, kill the parents, no need to pay.

How would the UN react were the mass killings going on in Israel and being done by Israelis? Think of all the crimes Israel is alleged to have committed; think of the global yapping and condemnation. Assad? Pish tosh.

As for Al Qaeda and the other IslamoNazis Assad is busily killing, no sympathy here.

Another lesson learned by the son was provided by Qaddafi, as spoken by a Bond villian: you’re only president for life.

One either hangs on by any means necessary, assumes room temperature, or seeks assylum in friendly nation. There are no other options. Old man Assad knew that, which is why he reduced Hama to rubble. That also served as an abject warning to anyone else thinking they could revolt.

I can’t imagine anything more frightening than a warning from John Kerry, unless it would be a “red line” from Obama.