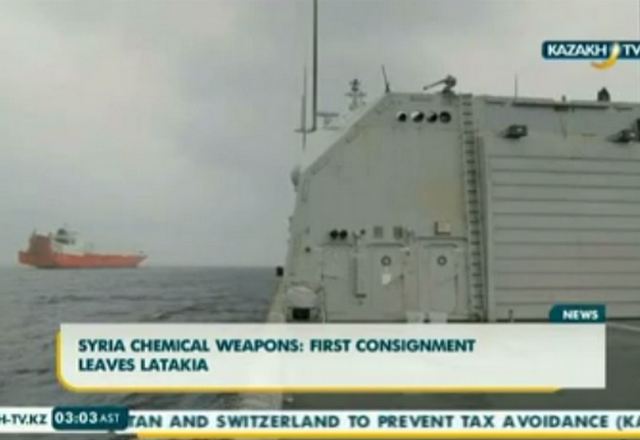 You might remember that Secretary of State John Kerry was quick to praise President Bashar al-Assad of Syria for completing the job of destroying all chemical weapons facilities in record time.

According to the deal worked out in September with Assad’s protecter, Russia, Syria was to rid itself of all of its chemical weapon compounds and production facilities. The first part of that obligation was to neutralize all of the factories so that they could no longer produce chemical weapons. Syria reportedly allowed that task to be completed on time.

Syria has destroyed its declared chemical-weapons production facilities, international inspectors said Thursday, marking a major step in the complex task of ridding the country of the weapons of mass destruction.

The declaration came a day before a Nov. 1 deadline as the team overseen by the inspectors hewed to an ambitious schedule for destroying Syria’s entire chemical arsenal by the middle of next year — a far more rapid process than comparable efforts in other countries and one that must be implemented in the middle of a civil war.

Secretary of State John Kerry said Monday that it was a “credit” for the Assad regime that the process of destroying the chemical weapons had begun in “record time” and with the compliance of Damascus.

“The process has begun in record time and we are appreciative for the Russian cooperation and obviously for Syrian compliance,” Mr. Kerry told reporters after talks with his Russian counterpart, Sergei Lavrov, on the sidelines of the Asia-Pacific Economic Cooperation(APEC) summit in Indonesia. “I think it’s extremely significant that yesterday, Sunday, within a week of the [United Nations] resolution [on Syria’s chemical arsenal] being passed, some chemical weapons were being destroyed.”

The next step was to transport the chemicals used in making the weapons to the port of Latakia, on Syria’s Mediterranean coast, from where they could be transported to their destruction.

The problem is that the second part of the process is, shall we say, not proceeding in “record time.”

The New York Times reported the other day, Second Cargo of Chemical Agents Leaves Syria as Pace Is Criticized:

The two cargos exported so far from the port of Latakia — the first left Jan. 7 — have each carried a total of 15 to 20 tons, diplomats and arms control experts have said privately. If confirmed, the low estimate would be only about 5 percent of the 600 tons of the most lethal compounds, including components of sarin and VX nerve agents, that Syria had been obliged to export by the end of 2013, the first deadline under the government’s pledge to renounce chemical weapons.

U.N. Secretary-General Ban Ki-moon suggested in a report to the Security Council this week that shipments had been unnecessarily delayed and urged the Syrian government to speed up the process.

U.S. Secretary of State John Kerry urged his Russian counterpart Sergei Lavrov during a phone call on Wednesday to “press the (Syrian) regime to move forward with the necessary steps on the chemical weapons process,” State Department spokeswoman Jen Psaki told a briefing.

I don’t expect that Kerry’s urging will do anything, but it’s a step that at least he acknowledges that there’s a problem. However, comments from two unidentified Western diplomats are very disturbing:

Another senior Western diplomat said the Syrian government is “teasing us” by dragging its heels but doing enough to avoid being declared in non-compliance with its obligation to destroy its chemical weapons program.

The second diplomat added that Russia would never permit the U.N. Security Council to declare Assad’s government in non-compliance with its duty to eliminate its poison gas program. …

“Our impression is that they (Assad’s government) are managing this issue in parallel with the Geneva discussion,” he said. “Everything is blocked so they are blocking on the chemical weapons to remind us” of their power on this issue.

The first tells us that Assad is simply doing the minimum required to avoid being deemed to be in violation. The second tells us that he’s using his leverage, because of the value placed on the Geneva talks. It sounds like Assad has learned his lesson that the West would rather talk and agree than fight.

No doubt his sponsors in Tehran are paying attention.

Lemme see if I have this right.

John F’ng Kerry is a Democrat. The symbol of the Democrat party is a jackass.

Russians use imagery to convey messages. Ergo, Russians view anything Kerry says as the braying of a jackass. And they give it proper consideration under that view.

The only way the lack of co-operation would matter to Obama is if the American media made it a big deal in their news casts and Sunday gabfests. He knows that won’t happen.
I expect little to know reaction from the Obama team about Syrian abrogation of their agreement with team Obama.

The destruction of various chemical weapons plants began in September and was completed by October 31. Eight weeks. With some plants being located in war zones. Without a single disaster.

I am a chemist by trade, and in my opinion, the decommissioning of nearly any kind of chemical plant in good order in that time frame is …. unlikely. Logistics, ya know. I wondered if the general idea was simply to remove the microprocessors (or programs) dedicated to weapons product. That would be a breeze, and leave a quick way to re-acquire the capability.

Further, chemical plants can be repurposed readily. The product of a plant is really determined by its feedstocks (what you put through it) rather than the infrastructure (heaters, pots, coolers and pipes).

Finally, chemical plants are expensive. It just seems stupid to destroy something so valuable.

Bottom line, I never believed any of this, and thought that John F’n Kerry looked like a complete fool for buying into it.

Wow, Assad must be really, really scared of Obama, huh?

The fact that Obama talked off the cuff into creating this silly red line business with Syria really shows how little he cares about guarding his words, which is a basic and essential skill in diplomacy.

I guess it comes from using his words to suck up to people who could propel his career forward. Obama lies to get ahead, to get people to like him, etc. So of course he regards his words as having no need for reliabilty.

Syria is a war zone . How is assad expected to do all this ‘goody’ stuff when the very same demanders are arming & financing new waves of 30,000 foreign jihad & supplying them with weapons . ( looking at you USA GB ) .

These people at these things they call negotiations are getting ridiculous. It’s mean but I wish Assad would just hand them all a parcel containing examples whilst they sit at the mahogany ( likely endangered wood ) table.

What difference at this point in time do they make?

Agree BtG. The notion that large quantities of chemical weapon materials can be gathered up and safely moved around a country engaged in a sectarian war on a tight deadline is a bit silly, and it serves no good purpose to draw negative attention to this delay.