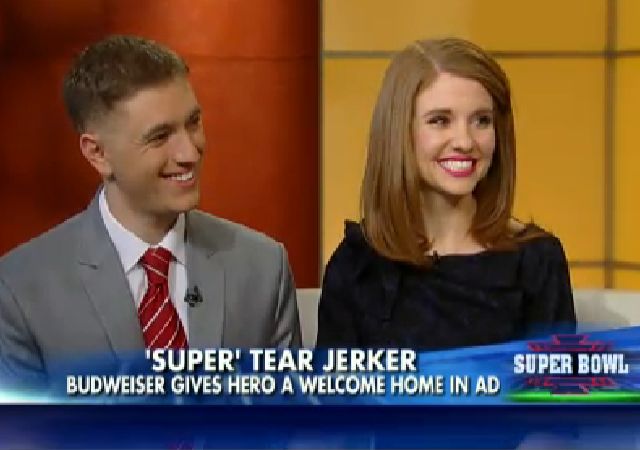 Yesterday, I highlighted a handful of Super Bowl ads that will touch your heart or make you smile in a post that we published before the big game aired.

The first of those ads was a spot from Budweiser, titled “A Hero’s Welcome,” and it’s turned out to be a favorite of many viewers.  It features Lt. Chuck Nadd, an Army helicopter pilot newly returned from deployment in Afghanistan, being welcomed by his girlfriend and then by an entire community. His commanding officer had told him he’d be giving a speech for the VFW and would be filmed as part of a documentary.  The homecoming included “a full ticker tape parade, complete with marching bands, antique military vehicles, the VFW motorcycle club and an appearance by the world-famous Budweiser Clydesdales,” according to Anheuser-Busch, which produces Budweiser beer.

As a follow-up, the pair appeared on this morning’s FOX and Friends to share the story.

The entire experience was a complete surprise to Nadd, who was nominated for the homecoming by his girlfriend, Shannon Cantwell.  Cantwell says she found out through the VFW that they were looking to honor a returning soldier.  Nadd didn’t even know until days before the Super Bowl that it would also be a commercial aired during the big game.  He and Cantwell were also surprised to be guests at the Super Bowl game yesterday.

Nadd told FOX News that he hopes the experience will inspire appreciation for all those who have been on deployments.

“So many folks deserve this so much more than me,” he said. “I really hope that the message that gets out is that for all the people who have been on two, three or more combat deployments, you know folks who have come back injured or not come back at all, those are the real heroes.”

Budweiser emphasized the symbolism of the homecoming to honor all those who have served, in a short documentary it posted about the event.

We can expect to see more from Budweiser on this front – it says the commercial was the launch of “a year-long social media campaign honoring the U.S. military,” according to the Orlando Sentinel.

“So many folks deserve this so much more than me,” he said. “I really hope that the message that gets out is that for all the people who have been on two, three or more combat deployments, you know folks who have come back injured or not come back at all, those are the real heroes.”

I’m an Army veteran, but never even served near combat. So I’m with him 100%, that the vets who should be applauded are those who sacrifice the most.

There’s also this commercial from a few years ago.
Beautiful!!

And this other video is a real life version of the commercial.

This was a beautiful to watch; a sweet couple, and he is indeed modest. The full length commercial will bring tears to your eyes even as it makes you smile.

On another note, Mandy, “The entire ordeal was a complete surprise to Nadd”; please change “ordeal” to “event”. The denotations and connotations of “ordeal” are negative.

Changed it to “experience.” Thanks for catching that. That’s what happens when I’m trying to write posts on two drastically different topics at the same time.

I’m glad to see that Budweiser (bought by InBev) hasn’t lost it’s American roots and is brave enough to toot that horn! Best ever use of a commercial. American vets deserve this kind of enormous public praise and thank you!