“President of most of the white guys in America”

“President of most of the white guys in America” 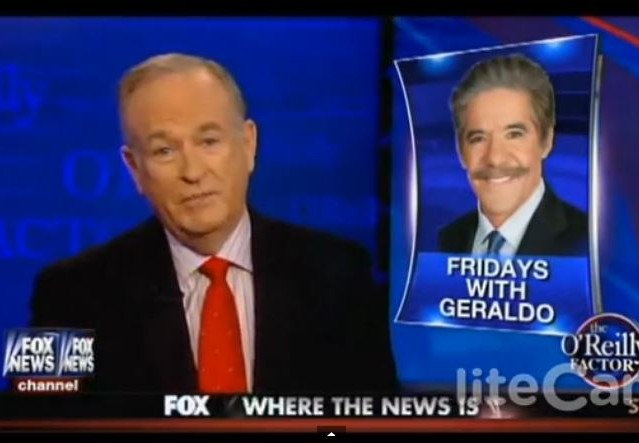 That’s how Geraldo characterized Bill O’Reilly, while calling Obama “President of almost everybody else.”

Geraldo also accused O’Reilly of stripping Obama “of his majesty.”

Shortie is just ticked off that someone dared to ask His Majesty questions regarding his wardrobe.

O’Reilly and Rivera — two of the lowest life forms in journalism. O’Reilly is a fraud and a coward. “I’m for the folks.” What a joke. To sit there and tolerate Obama’s lies, especially his gobsmacking lie about the IRS scandal, when he had all the evidence he needed to refute him — pathetic.

Indeed, raven, but that is how O’Reilly operates. He knowingly lets people lie to him, accepts their answers, then proclaims their courage for coming into the no spin zone. Like Geraldo, he’s a bloviating blowhard who gets orgasmic from watching or listening to himself.

Geraldo also considers himself a center line moderate, can you imagine?

Gerald Rivers doesn’t consider himself a moderate. If he says that, it’s just because that’s what he WANTS to be considered, so he can help move the marker left.

O’Reilly was giving Obama good press and sucking up for a couple of months before the interview. Guess he didn’t want to jeopardize his big 15 minutes!

So very true. O’Reilly calls in the worst “defenders” on an issue, and then accepts the poor reasoning of their arguments. When will he, for example, EVER put on William Lane Craig, or Alvin Plantiga in a debate on any theological topic? Answer, never. He’d get his philosophical head handed to himself on a platter.

Stripping Obama of his “majesty”…. Consider the rest of this as being heavily laced with vile profanities.

That’s an act on par with stripping Ted Kennedy of his safe driving awards. Or it would be like stripping Joe Biden of his Neal Kinnock transcripts.

Trooper John: I love snarky humor that requires a bit of knowledge of past history. (Neal Kinnock: LMAO)

He’s got such ego issues that I’ll wager he drives a Hummer or a Range Rover and takes extra-strength ExtenZe.

Maybe if Bill had conducted the interview lying prone on his face that would have made Geraldo happy. Why does Fox keep this jerk around?!

*sigh* well, I suppose that “majesty” is a step down from “messiah.” Perhaps that’s what counts for progress, these days.

Perhaps Geraldo is unfamiliar with our system of government or …

Head like a hole. Black as your soul. I’d rather die than give you control. Bow down before the one you serve.

Geraldo’s head is about as full as Al Capone’s vault.

While the Nine Inch Nails song is referring to God Money, I guess it could equally apply to God Government as well.

Love that song btw. So true that they’ll get what they deserve in the end.

My first thought when I heard that ‘strip him of his majesty’ comment was “How do you strip the majesty from an ’emperor with no clothes’?”

O’Reilly and Hannity are both very terrible at getting information from their guests but then that’s not the purpose they have in scheduling guests on their respective shows; they both seem to have a need to promote their individual highly inflated egos.

Even Ms Kelly is getting to be more and more like those O’Reilly and Hannity; she too can be a jerk, to a lesser degree however.

Greta is great at getting information from her guests because she asks pertinent and germane questions while giving her guests great latitude in answering her questions or to explain their position; it helps that she seems to understand the subjects she has under discussion.

Remarkable that FNC is keeping Greta around while instead highlighting the other three, jerks, on the evening lineup.

Greta’s great. Never thought I’d say that about a Democrat. She’s the true no spin zone on Fox. Good questions. Listens and follows up. Polite. Letsvthe guest talk. Not in to leading questions.

Obama and O’Reilly represented “the two halves of the issue…”?

We are supposed to be deferential to prevarication and bullshit?

Washington and Jefferson are rotating at high speed in their respective graves.

A President is not…and never was…imbued with “majesty”.

They are SUPPOSED to be just folks, doing a job for a defined period of time.

Servants of the people. No more than their fellow citizens, but put in a position of leadership for the nonce.

We are so screwed.

Was this a SNL segment? Was that Tina Fey with a beard?

Geraldo has become the president of all the ‘journalists’ who think they are journalists. And, like his ‘royal highness’, Geraldo needs a hearing aid, not a phone and a pen.

Maybe Geraldo wants a coveted position in the court of his “Majesty.” “Lord Rivera, King’s Stool Reviewer” has kind of a ring to it.

Obama’s lineage is not of the George Washington to W type. His lineage is that of Marx and Ayers lazy “community organizer” type.

Geraldo is in denial. He is experiencing what I predicted many, if not most, on the left would eventually experience with the election of our “first black president.” The expectations were so high that if he failed to meet them, which was a given, the left would be left in a state of confusion, and outright denial. That is where Geraldo is. Reality tells him Obama is horrible, but he cannot admit that to himself, nor will he admit to a mistake. So he has to find other excuses, and the excuse of choice for the left is usually “racism”. It is easy, and doesn’t require any intelligence. If is simply Pavlovian.
.
But it can be other bogeymen such as Fox News, or in this specific case, Bill O’Reilly. And it has to be so. They will never admit to the mistake they’ve made because they have convinced themselves that to acknowledge Obama is horrible would make them racist too. That is why Geraldo can claim that Obama is the “President of almost everybody else.” Because “everybody else”, except whites of course, cannot be racist.

Geraldo has as much intelligence as the President (and I’m referring to ANYONE in that office) has majesty.

What a freakin loon that man is. I’m surprised he still has a job. Although perhaps he’s filling the position of court jester at FOX?

Majesty? What majesty? Is this the face the Democrats want on Mt Rushmore?

The president’s fall from grace was through his own hand. He lied his way to the WH and those lies have been exposed. It was a waste of air time to interview the president and a further waste to allow Jerry to make any comments about it. Both are losers.

What’s alarming about current outlooks, is that while Americans have been feverishly trying to strip themselves of self-interest and self-protection vis-a-vis other races, even building up other races via welfare, affirmative action, et cetera, the other races, though living off of our generosity, are repeatedly stating that white people are evil. I’m using “white” in a general way, not in technical sense (i.e., muslims are white but one of the future oppressors of us, not one of us).

So, when through our generous and tolerant good graces they become the majority, they intend to oppress us because they can. Historically, whites could have, arguably should have, continued to dominate all fields, but didn’t. I take the other races at their words: whites are going to rue the decision to be generous. They already do rue it in Europe and in Africa. Too bad Americans political correctness won’t allow them to recognize and respond for self-preservation.

Not Muslims, Ksren, Arabs. Technically at least until somebody applies the one drop rule to them.

Have you seen the Saudi Bandar al Saud? I’ve got cousins whiter than he.

As supposed president of the U S, so majestic o-bow-mao couldn’t even wear a necktie!
geraldo just completed his membership, with juan williams, in the intellectual bankruptcy club!

This from a guy who started out hyping Al Capone’s hidden stash 35 years ago to his current public image he promotes by posting a Anthony Weiner “wanna-be-selfie”. How can anyone take his journalistic credentials or his insightfulness of anyone else’s intent seriously.

Rivera is inconsequential. He should have a show on Nickelodeon so he can better reach his demographic audience.

Hilarious, but left it to Geraldo to try to exploit race since his entire career is based on doing just that.

He used to go by “Gerry Rivers” until TV decided to seek out Chicano talent. Suddenly, he’s Geraldo Rivera, and the rest is history.

Gerry has always been as full of talent as Al Capone’s safe was of treasure.