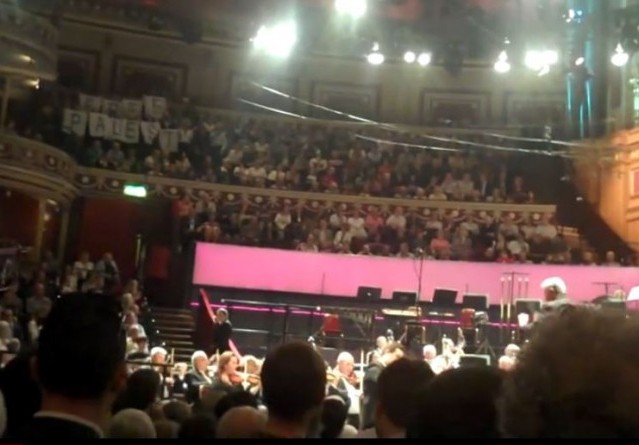 The BDS movement presents little real threat to Israel currently, while the European governments do present a potential threat, but it is a diplomatic, not boycott, threat.  Kerry, and the boycott movement, conflate the two.

The problem is that despite the fact that there’s no evidence that the BDS movement is gaining mainstream acceptance there are many who pretend that it has.

Let’s look at the New York Times coverage of some recent BDS activity.

The academic and cultural boycott, organized by international activists to protest Israel’s policies toward the Palestinians, is a heated and contentious issue; having Dr. Hawking join it is likely to help the anti-Israel campaigners significantly.

There are two items of note. The first is that the BDS movement is described in terms of being a “protest” against “Israel’s policies toward the Palestinians.” It is not described as a movement to delegitimize Israel. The second is the assertion that Hawking’s action “is likely to help the anti-Israel campaigners significantly.” This is a judgment, but it is also somewhat quantifiable. Will subsequent reporting use similar standards? The article later noted that the Oxford student union overwhelmingly voted against an academic boycott of Israel.

Later that month when Alicia Keys announced that she would defy the anti-Israel activists two months later, the New York Times reported:

Alicia Keys said on Friday that she is going forward with a July 4 performance in Tel Aviv that has drawn calls from other artists to cancel as part of a larger cultural boycott of Israel.

Ms. Keys, the R&B singer whose albums include “Girl on Fire,” is scheduled to perform at the Nokia Arena in Tel Aviv on July 4 as part of her first trip to Israel. But musicians like Roger Waters and writers like Alice Walker have publicly asked her not to go forward with these plans to protest Israel’s policies toward the Palestinians.

But even in this article more acts are reported going to Israel than staying away. We also have the phrase “protest Israel’s policies.” Later, the article quotes both Roger Waters and Alice Walker referring to Israeli policies as “apartheid.” Again the article underplays the level of opposition to Israel. It isn’t Israeli policies that the are protesting but Israel’s existence by questioning its legitimacy.

In December when the American Studies Association voted to boycott Israel, the New York Times reported:

An American organization of professors on Monday announced a boycott of Israeli academic institutions to protest Israel’s treatment of Palestinians, signaling that a movement to isolate and pressure Israel that is gaining ground in Europe has begun to make strides in the United States.

Members of the American Studies Association voted by a ratio of more than two to one to endorse the boycott in online balloting that concluded Sunday night, the group said.

With fewer than 5,000 members, the group is not one of the larger scholarly associations. But its vote is a milestone for a Palestinian movement known as B.D.S., for Boycotts, Divestment and Sanctions, which for the past decade had found little traction in the United States. The American Studies Association is the second American academic group to back the boycott, movement organizers say, following the Association for Asian American Studies, which did so in April.

The first item of note here are the use of “gaining ground” and “making strides.” The article mentions the ratio of those voting for the resolution, but it doesn’t mention what Phyllis Chesler observed that those voting for the boycott represented only 16% of the organization. Finally there’s the description of the vote as a “milestone” for the BDS movement.

Finally there’s the coverage of the Scarlett Johansson, OxFam split:

But instead of a fizzy drink, Ms. Johansson, a Hollywood actress, stirred up an international political storm this week because SodaStream’s largest factory is in a Jewish settlement in the Israeli-occupied West Bank, an area the Palestinians envision as part of a future independent state.

Her deal with SodaStream has led to a parting of ways between Ms. Johansson and Oxfam International, the confederation of aid groups. Oxfam issued a statement on Thursday saying it had accepted Ms. Johansson’s decision to step down after eight years as a global ambassador. …

The dispute over the ad, scheduled to air during the Super Bowl on Sunday, has pitted pro-Palestinian activists against people and groups who support Israel unreservedly. …

The fuss comes to the fore just as concern is growing in Israel about a potential increase in foreign boycotts of its companies if current Israeli-Palestinian peace talks fail. Some European supermarket chains are already shunning agricultural produce from the settlements. PGGM, a large Dutch pension fund management company, recently decided to withdraw all its investments from Israel’s five largest banks because they maintain branches in West Bank settlements or are involved in financing settlement construction.

First of all this article refers to pro-Israel activists supporting Israel “unreservedly,” but it quotes a BDS supporter using the term “apartheid” to describe Israel. Can’t pro-Palestinian activists also be “unreserved” in their opposition to Israel? Also here the focus on the article is hyping the apparent success of the BDS movement even as it suffered a major defeat.

A few patterns emerge from this reporting.

Given that all available evidence is that the BDS movement is relegated to the fringes, it isn’t helpful when observers like Thomas Friedman write “Israel’s continued occupation of the West Bank is isolating the Jewish state more and more,” citing a random BDS success as proof. An editorial in the New York Times added insult to injury by criticizing a New York State Senate effort to deny funding to academic institutions that boycott Israel. Apparently no one told them that government funding is not a constitutional right. The criticism doesn’t make any sense if denying funds to American institutions “chills” free speech, doesn’t boycotting Israeli institutions have the same effect?

BDS right now benefits from an exaggeration of its influence and acceptance, the minimizing of its true intent and a lack of scrutiny of its methods. It exists in support of Mahmoud Abbas’s stated intent to forgo negotiations and bring international pressure to bear on Israel instead of negotiating in good faith.

The help it gets from mainstream journalists and politicians only serves to help its efforts to delegitimize Israel and encourage Palestinian intransigence.

The NYT … well they Would. Wouldn’t they?

As for the rest of those twits. It’s nothing more than a bandwagon they boarded to draw attention to themselves.
Like Scarlet the starlet has one freeking clue about political and social realities!

A symphonic response to BDS, Hitler and Stalin and to hatred incarnate, found everywhere:

Whenever the side of freedom is challenged by totalitarianism and murder, expect the NYT to choose the bad guys. They were pro-Israel for a long time, though, until Pinch Sulzberger took over operations.

In Pinch’s case, it is always difficult to discern whether his motivation is malice or just stupidity.