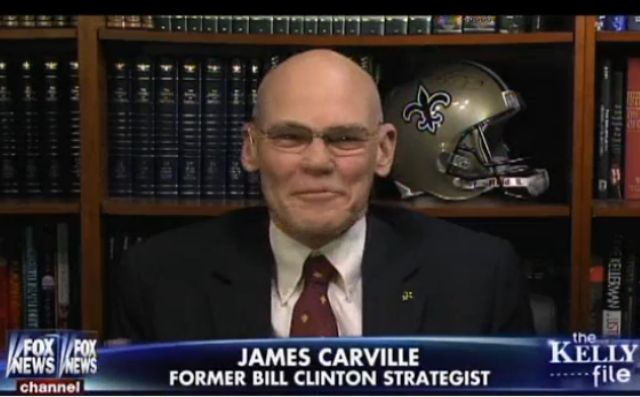 James Carville has found a new home at FOX News.

Veteran Democratic strategist James Carville has been hired as a Fox News contributor.

“James’ successful and storied career in politics over several decades is an enormous asset to Fox News,” Shine said. “We are privileged to have him lend his breadth of experience, wit and dynamic perspective on the network.”

He was previously a contributor with CNN, along with his wife, Republican strategist Mary Matalin, until January 2013.

Carville has already been a familiar face as a sometimes guest on FOX News, including this recent appearance with Megyn Kelly.

To the frustration of liberals everywhere, Fox again proves itself as the most ideologically diverse news network.

He must want an actual audience…

I’ll admit, he is a character. The only person in this world capable of controlling him is his lovely wife, Mary Matalin Carville. Because he is a lovable scamp, Fox is lucky to have him.

another good reason to never turn on the television…

He’s been auditioning for months now. He is regularly on O’Reilly and occasional on other shows.

I just hope having him a contracted regular means Matalin might appear more, too.

And to me he is soooo much less obnoxious that most of the other Democratic strategists who just like to toss bombs and anyone who disagrees.

James Carville?? I thought he died at the end of Lord of the Rings? must have nine lives…

Will Fox be paying for his elocution lessons?

I wish “K Street” had kept going. That show was getting pretty interesting when it ended.

I’m torn on Carville. He’s played a big role in politics during these long years where politics has turned into a game of 5 second, gotcha sound bites. At the same time, he’s more than happy to appear in front of a camera, for entertainment and documentaries, to show us how the sausage is made.

If he’s actually coming on to Fox to be an analyst, to discuss some “inside baseball” things, that’d be awesome. If he’s on Fox to be a cheerleader for his party, like just about every other “analyst” on cable news these days that’d be pathetic.

Carville is brilliant and funny. Had he not sold his soul to the Clintons, and become an independent analyst from the start, he might have been this generation’s Mencken.

But if we must have “balance” – still not valuable, it seems, to networks other than Fox – we may as well have the entertaining and sometimes insightful Carville as opposed to, say, the banal Juan Williams.

Phone lines are burning between NBC and MSNBC: “Why did we not offer this guy a show? Wtf, Jimmy? WTF?”

Why, why and why? Oh, the Clintons.