Criticizing Obamacare in order to save it. 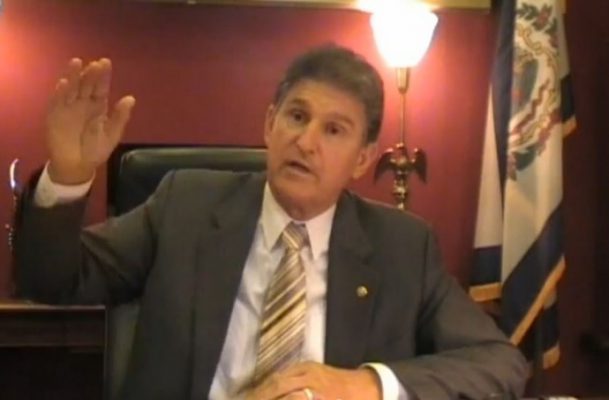 As reported by the Beckley, West Virginia Register-Herald, Joe Manchin said he would vote to repeal Obamacare.

That quote (below) has received a lot of attention, but in context it’s not at all clear that Manchin was doing anything other than playing both sides of the fence because he also said he supports fixing Obamacare (emphasis added):

Although Sen. Joe Manchin had planned to discuss the Charleston-area chemical spill and his recent piece of legislation the Chemical Safety and Drinking Water Protection Act of 2014, he instead turned his focus on a hodgepodge of topics, including minimum wage, balancing the nation’s budget and health-care issues….

He asked for all the listeners to let him and other lawmakers know their thoughts on the variety of topics, including the Affordable Care Act.

“We spend more on health care than any state, but we rank 43rd on wellness and longevity.”

Both parties agree on many aspects of the ACA, such as pre-existing conditions not being excluded from coverage and no lifetime caps, but there are still many kinks that need to be fixed, Manchin said.

“I will vote tomorrow to repeal (the ACA), but I want to fix the problems in it.”

He said the ACA is essentially a product and the government needs to find a way to “sell it” and make their customers want to buy it.

As Ed Morrissey points out, there isn’t even a Senate bill coming to vote “tomorrow” (i.e., today), so it’s not clear about what Manchin is talking.

Manchin has warned before about a “complete meltdown” of Obamacare:

The West Virginia Democratic senator said Sunday that the federal health-care law could be headed for a “complete meltdown” if costs rise too fast and individuals are not happy with their coverage.

From this vague and unclear statement, it appears Manchin is doing nothing more than criticizing Obamacare in order to save it.

Here’s video from August 2013 in which Manchin argues to save Obamacare through changes:

Well, no. It isn’t a “product” but an edict. We have choices as consumers of a “product”.

“From this vague and unclear statement, it appears Manchin is doing nothing more than criticizing Obamacare in order to save it.”

I’d say it was clear he’s trying to save his fanny from being detached from his nice, cozy seat in the Senate.

And it ain’t looking good…

Manchin is a little cuckoo! Quote from the story:

“Each administration has had its faults, Manchin said, as he mentioned former President George W. Bush’s economic stimulus package, which cost $2 trillion.

He said $800 billion of that stimulus money went to the government to keep needed services afloat, such as sewer, water and broadband services.”

Did I miss something? W stimulus costing $2T?

Manchin is not incorrect,

The stimulus money was added to the budget by Obama, meaning that it would be a permanent increase in yearly spending forever.

Republicans tried to play a game where they vote down the budget, but then voting it (the permanant stimulus for every year) back in through a series of continuing resolutions. Finally, the leadership think enough time has passed that nobody remembers opposition to the stimulus and acquiesced in the last debt ceiling deal to essentially making the stimulus budget increase permanent.

Yeah, right. Life’s taught me NEVER to believe a Democrat.

Democrats,
No ethics,
No morality,
No problem,

Oh, you can rest assured that Manchin WOULD vote to repeal, and that Dirty, Filthy Harry Reid would let him.

All for show. All to help dupe the voters.

Come on, Professor! Just like the MSM, this post breathlessly parses and attempts to analyze something a politician says to try to determine WHAT HE REALLY MEANS!

Has 5 years of Barack Obama not shown you that politicians lie? What Manchin says today means N-O-T-H-I-N-G as it relates to how he may vote or act in the future.

Peter Russo .. uhmm .. Joe Manchin will say anything if it gets him re-elected.

No. He is lying. Look at his record. He voted for EVERYTHING that the Democrats put out, except the few things he felt may hurt his re-election.

Manchin got elected by creating a few good ads. The main one was the gun-toting one.

But his record – down-the-line Democrat ideology! ObamaCare, cap and trade, etc. – down the line in sync with the leadership’s diktats. Here is Rand PAC’s 2012 ad about him. What a fraud!

He’s a lying liar who somehow has duped WV voters…..

He was elected because he was a popular former Governor. Manchin didn’t invent his stance on gun rights, he was always there.

His problem is like every single Democrat Senator, he has walked lockstep with Reid and Obama – right up until the time he began getting close to his reelection and saw his home poll numbers falling.

Conveniently enough, he has still NEVER opposed Reid or Obama when his opposition would make the difference to defeat them. That may be because no other Democrats ever dissent, but it is true nonetheless that his dissents have been without any real meaning or effect other than PR.

I get the feeling you knew the answer before you asked if Mr.Manchin is now against Obamacare. I live here in West Virginia. Permit me to answer your question in “West Virginian”. It depends if the wind is blowin’ up the holler or down the holler.

Maybe we should send the FCC to his office and have them do some ‘research’ so they can tell us what he meant to say.

God, and here I thought only RINO’s were capable of duplicitous behavior playing both sides for rubes. I must have been born ignorant. /sarc off

Manchin’s words sound like he’s about to market a new brand of…. waffles.

There will come a time when all of the sensible, polite and well meaning Republicans say to us “we can’t overrule Obamacare, but we do have support from Democrats to reform the program.”

And as soon as we agree to that, all is lost.

Because as soon as Republicans shift to reforming Obamacare, the media can blame all of the problems of Obamacare on the reforms. Also, the Democrats will shift their position from defending Obamacare into a position of demanding an even more totalitarian system. Republicans will get stuck halfheartedly trying to defend the indefensible. And they will lose.

Manchin is responsible for this mess, and its not the Republicans job to bail him out. Vote him out already, repeal the damn law.

“We should be working together to identify which parts of the law are broken and need to be fixed,” he continued. “We may learn that some parts of the law can’t be repaired, and we should eliminate those parts entirely.”

So, he’s already walked it back.

Don’t EVEN entertain the idea of tinkering with ObamaDoggle.

Kill it. Now. Before it does MORE damage to people.

Oh, sure, he’s against ThatGuyCare. Until the day after election.

As long as he votes for Harry Reid, it does not matter what opinions he holds on any subject.