Guess what is the most common racial slur on Twitter

Guess what is the most common racial slur on Twitter

Saturday Night Card Game: Not what you think, or at least, not what you have been trained to think. 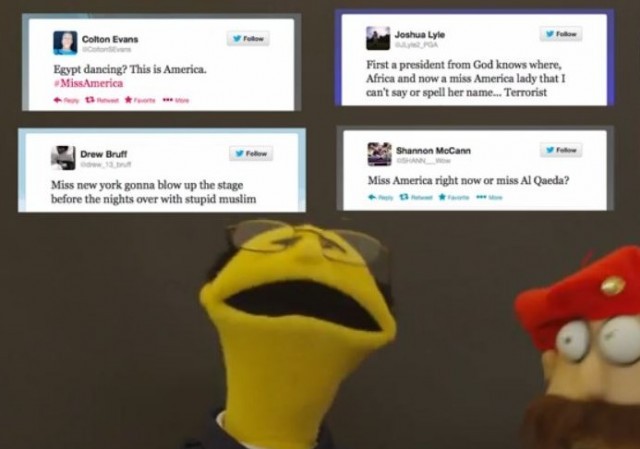 Demos, a left-wing Soros-Open Society affiliated UK think tank, did a study of “slurs” on Twitter.

The Daily Mail Reports, Just how racist is Twitter?

10,000 racist tweets are sent ever day, a major new study into racism on social networks has discovered.

Researchers analysed 126,975 English-language tweets from across the globe over a 9-day period in the biggest ever study of Twitter racism.

Researchers revealed the most common racial slurs used on the micro-blogging site included ‘whitey’ and ‘pikey’.

However, as many as 70% of tweets using such language were deemed to be using slurs in non-derogatory fashion.

‘This sparks the debate about the extent to which Twitter truly is a platform for racism and abusive language,’ the report claims.

Jamie Bartlett, Director of CASM at Demos and author of the report, said: ‘Twitter provides us with a remarkable window into how people talk, argue, debate, and discuss issues of the day.

‘While there are a lot of racial slurs being used on Twitter, the overwhelming majority of them are not used in an obviously prejudicial or hateful way.

Here’s the chart from the Demos Report (the percentages are of the total of tweets identified as containing slurs: 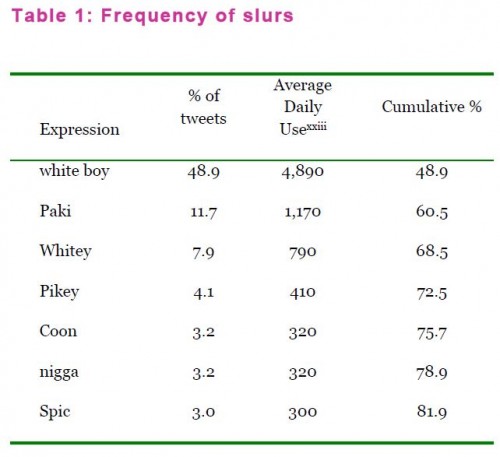 Well, we now know that Wild Cherry, was way out front on this, eh?

This doesn’t surprise me (though expected to see anti-Jewish slurs a little higher on the list). It follows naturally from decades of propaganda to the effect that only white people can be racist, and therefore anything unflattering that other people say about white people cannot possibly be racist and or unjustified.

It also follows from the fact that white people tend to be exceptionally tolerant in a global measure, and fairly aggressive in policing signs of bigotry among themselves, while some other cultures hold chauvinism and anti-white sentiment to be virtues.

I saw this – very good to see the Card Game on it!

And there ain’t no bigot like an entitled bigot with permission from his bigoted fellows.

Looks like I need sensitivity training, so I’ll know when to get uppity over some trivial words.

You’re all a bunch of Twittists !

I was thinking “cracka,” but close enough, I guess ~

What the heck is a “pikey” anyway?

I know – I really should get out more!

Like “paki” it’s mostly a term used in Britain. Across Ireland and Britain there is a culture of itinerants who in polite language are called travelers. Because they camp out near the turnpikes they travel the less polite term for them is pikey.

Travelers are similar to gypsies in that the often support themselves through scams and petty theft but they aren’t of Romani descent. They mostly speak English but there is a form of pidgin Irish-English in use, often used to baffle outsiders.

It’s a stretch to call this one a racial slur since the group is mostly defined by the members’ itinerant habits.

Most I’ve known were from Missouri. For some odd reason, they are very into the “Baby Beauty Pagent” deal commonly.

Netflix has a series called ‘The Riches’ that follows a family of travelers in the US, and as you say it depicts them as being Irish travelers who came to the US. It was somewhat entertaining… stars Eddie Izzard as the male lead. Funny how they struggled with camera angles to not reveal him as a midget.

Of course, that is further proof of “white privilege”…

As a white boy, I am highly offended that the term cracker was not used in their search criteria.

And since coon-ass refers to a person from Louisiana, how is that racist?

Adjust these numbers for the population distributions and all of sudden the numbers suggest that perhaps non-white people are BY FAR more racist than white people? Gasp!!!