A fitting end to the rule of Bob “Filthy” Filner. 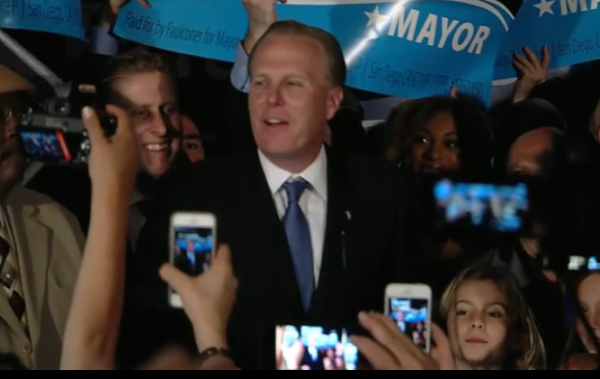 Happily, it looks like my prediction from this weekend came true!

San Diego becomes the nation’s largest city with a Republican mayor, and Kevin Faulconer will be the only Republican to lead a major city in California, where Democrats hold all statewide offices.

Alvarez, 33, congratulated Faulconer late Tuesday, tweeting, “It’s clear that he will be the next Mayor of San Diego. I look forward to working with him.”

In fact, the biggest news seems to be the huge discrepancy between the tight poll numbers entering the race and the nearly ten-point defeat Faulconer handed Alvarez in the actual election. This was despite a massive door-to-door canvassing of the neighborhoods by the Democrats (that brought 2 Alvarez supporters to my door) and an influx of union money for the Democratic candidate.

Why the difference between the polls and the results?

David Alvarez is an earnest young man, and a fresh face. Kevin Faulconer is a boring old moderate Republican. But like almost every modern elected Democrat, Alvarez was beholden to the government workers’ union political machine. Was Obama’s endorsement what cemented that fact in voters minds? Or is it the cumulative effect of Obamacare, rewriting laws by executive order, NSA wiretapping, and drone strikes on children?

Can an Obama endorsement really be the kiss-of-death that W.C. and I say it is? I will let a Missouri senator answer that question.

Sen. Claire McCaskill said Tuesday that if she were up for reelection this year in a purple state, she “probably” would not have President Barack Obama campaign with her.

The Missouri Democrat was asked on MSNBC’s “Morning Joe” if she would appear with Obama if she were one of the Democrats running for reelection in Arkansas, Louisiana or North Carolina.

“You know, probably not,” McCaskill said.

What does the election of a Faulconer actually mean for San Diego? The San Diego Union Tribune offers this assessment:

A Faulconer victory breathes new life into the local Republican Party by restoring its control of the Mayor’s Office that its candidates have occupied for much of the past four decades. Faulconer also becomes the only Republican mayor of a top 10 U.S. city, making him one of the party’s highest-profile leaders in the state.

On the other hand, one of the area’s best political experts, Chris Reed, expresses some serious concerns:

But Republican insiders — and scores of business executives — are worried about much more than just this election.

It’s not just the usual concerns of GOP operatives in California: that the party’s hot-button social issues turn off young voters and that Latino voter turnout is steadily increasing. It’s that San Diego’s politics are undergoing what might be called a “Los Angelization.”

….Union-favored Democratic candidates — such as Alvarez — are increasingly likely to beat Democrats with independent streaks. As recently as 2011, there were Democrats on the council who occasionally would take on unions — politicians with backgrounds in engineering and small business, as well as party members who appeared eager to hear out business interests’ concerns.

Reed notes that the “radicalization” of the San Diego City Council is likely to continue despite the election results.

However, for today, San Diego offers hope that there will be some real change this November.

Faulconer’s victory almost made up for the Aztecs getting bushwhacked in Wyoming. At least something good happened last night.

If Faulconer can reduce the influence of the public employee unions I’ll be truly elated.

I’m still elated that former city attorney and all-around repugnant reprobate Mike Aguirre only managed to squeeze out 9,081 votes (4%) in the initial special election back in November. Very schadenfreudilicious.

Congratulations, Mayor Faulconer. You’ve got 2 years to make it stick for another 4.

So… just don’t go all Boehner on us please!

Is this the Mike Aquirre who was involved with the big-brother organization?

Can we get the President to endorse every single candidate the Democrats run in 2014 and 2016, both national and state?

Best of all was seeing despicable shape-shifter Nathan Fletcher not even make the runoff!

Isn’t it fabulous to see all these Dim pols forced to admit that campaigning with Barry Soetero is akin to walking through church with a fresh dog turd stuck to the bottom of your shoe?

So what if they won’t be seen at campaign events with him? There should be plenty of audio, video and written evidence of them suckling his knob for some fabulous campaign commercials… every Dim pol is going to get a whole lot of Soetero mud in their face this fall… it’s going to be fun to watch, most of all for the damage it will do to Little Boy Barry’s out-sized ego.