Who will replace Bob “Filthy” Filner?

Who will replace Bob “Filthy” Filner? 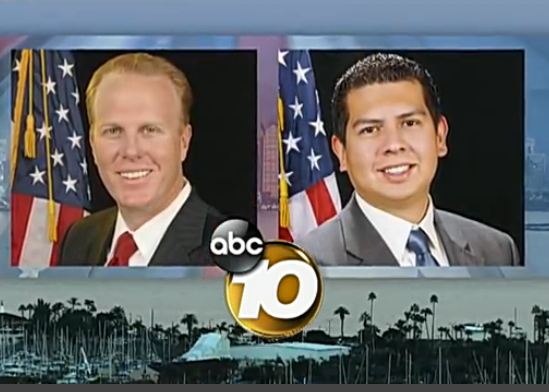 “As a native San Diegan, David Alvarez has been a fierce advocate for his city, and on the Council, has led efforts to build a strong middle class, put neighborhoods first and expand opportunities for kids in and out of school. Today, with the city’s economy and neighborhoods poised to make progress there is no question that David is the right choice to be San Diego’s next mayor and I am excited to support him,” Obama said.

It is well known that such an endorsement has been the kiss-of-death for many campaigns.

All joking aside, the race between the two men is extremely close.

Both candidates are political wonks — which is what we got in the last mayor (minus the troubling propensity for assaulting women).

And while Alvarez has substantial support from the Hispanic community and unions, Faulconer has been able to build a surprising “coalition of the willing” that has led to the more trusted endorsement of the San Diego Union Tribune.

He certainly has the support of the San Diego business community and related interests, but only about one-third of the contributions raised by committees supporting Faulconer has come from out-of-town sources.

Faulconer has also made a concerted effort to reach out beyond traditional Republican constituencies. The effort has paid off with endorsements that span the political spectrum: the San Diego Police Officers Association, San Diego County Sheriff Bill Gore and the Deputy Sheriffs’ Association, the Latino American Political Association, pastors representing largely African-American churches, a group of bicycle enthusiasts, advocates for the homeless, including the revered Father Joe Carroll, a collection of Democrats, including the granddaughter of iconic farm labor leader Cesar Chavez, a group of women leaders, including Jacque Young, the wife of former Council President Tony Young, a Democrat, and former City Attorney Mike Aguirre, also a Democrat.

Part of the reason Faulconer has received such a broad range of support is his teamwork with former fellow councilman Todd Gloria in skillfully removing Bob Filner from office after numerous sex harassment claims. Gloria, who is a Democrat, has received a great deal of praise across the political spectrum for getting back to business once Filner left. Gloria gave Alvarez his endorsement in this race, which was one of the more important ones the candidate received; we will see what impact it has this Tuesday evening.

And while San Diego currently purple in a sea of blue, it will be interesting to see if voters are going to use this as a referendum on Obama and his signature healthcare legislation. In the lasted developments, our state exchange has taken down its error-plagued online physician directory until further notice.

The announcement was made late Thursday after consumers complained that the directory contained misinformation about whether their doctors were participating in their new policies. Exchange officials said they would remove the physician directory from its website.

…The complaints began shortly after the policies became effective Jan. 1. Enrollees said that they checked the Covered California website to make sure their doctor would be part of their new plan’s network, but later found out the information was wrong.

And Covered California has been held up as one of the better examples of state-run health insurance exchanges. It will be an interesting to see if it is a bellwether for November’s races.

Leslie – I hope so, and I am a union stooge (MEA) by contract. I’ve dealt with Faulconer a few times and he’s always been a fair and reasonable man. I don’t know Alvarez, but our union has endorsed him, which is almost always against my wishes (Closed Shop). The outside union money is disgusting, the racial angle (“it’s OUR turn!”) and his relative inexperience and age make him the lesser choice. Alvarez seems like a decent guy, but no

I get several negative campaign ads from both sides, every day. The ads are nasty, and as far as I can tell, unfair to each candidate. They are also very repetitive.

It makes me wonder if some people don’t see elections solely in terms of opportunities for advertising contracts, effective, or not.

[…] the disgraced Democrat Bob Filner. The race is apparently close, with Republican Kevin Faulconer having a very decent […]

by the way – Alvarez picked up the “Kiss of Death” endorsement of Obama today. We’ll see how that plays out