Promoter under pressure — from those who didn’t want to see George win? 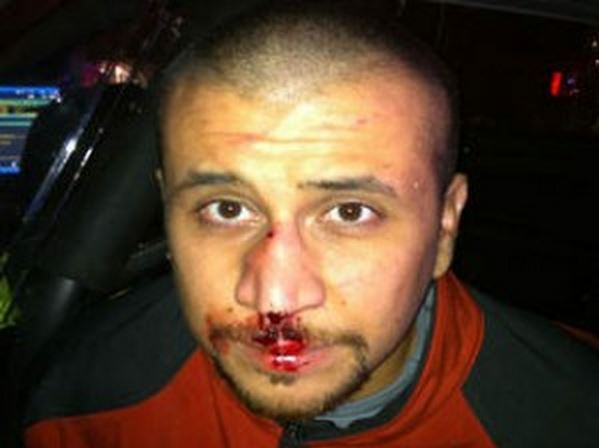 I was looking forward to the charity fight between George Zimmerman and rapper DMX. 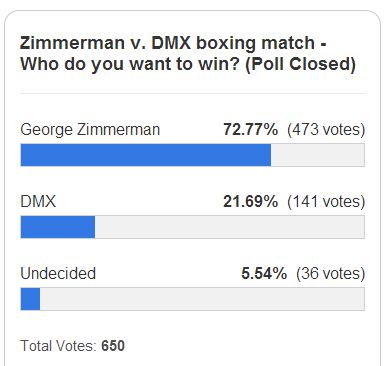 But it is not to be, as reported by the L.A. Times Promoter calls off DMX-George Zimmerman boxing match (h/t Hot Air):

A publicity-stunt boxing match is no more.

The much hyped and even more divisive bout between DMX and acquitted Trayvon Martin killer George Zimmerman has been called off, according to the promoter.

“This was the wrong person to put in the ring and define celebrity boxing,” Damon Feldman said Saturday on Twitter, referring to Zimmerman. He said he was scrapping plans because “I’d rather be happy and make people happy.”

The DMX camp, meanwhile, was putting its own spin on the cancellation, suggesting DMX had second thoughts. “The George Zimmerman fight is canceled,” DMX spokesman Domenick Nati said in a statement Saturday. “DMX never agreed to the fight and we thank you for all of the support from DMX’s fans.”

The bout between the veteran rapper and Zimmerman had generated strong negative response. Many said that added attention for a controversial figure like Zimmerman was a bad idea all around.

In a series of tweets Saturday afternoon, Damon Feldman explained his decision to cancel the match that was announced earlier this week.

“This was the wrong person to put in the ring and define celebrity boxing thank you,” he tweeted from his handle @hollywoodbox11. “I walked away from av [sic] million dollar payday with this fight but to be honest I’d rather be happy and make people happy thank you.”

The promoter’s Twitter feed does indicate he was feeling pressure to cancel from George haters: 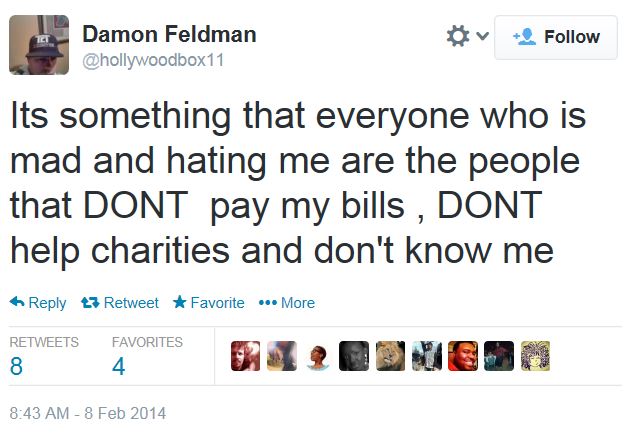 zimmerman is self destructing. I think he is carrying a lot of guilt over what he HAD to do (as would I) and its showing.
he never should have even agreed to this.
IMO his family needs to get him some help.
of course, according to some, he should have just let his head get repeatedly bashed against the concrete by the little angel….

George would be wise to move to someplace else and start trying to restart his life. This sort of thing is not helping.

I thought of this as a great idea for Zimmerman, it would deflate the hate through proxy and through ridiculousness.

As a replacement – how about a match between DriveLie and one of the suspicious looking hippies?

Just as well. George doesn’t need to be taking that route.

Not to mention that his opponent has publicly stated that he would ignore any and all rules of the bout in order to injure Zimm.

The promoter is known for staking faking matches. What you do here is find is fake rapper. You know some guy who group up in Beverly Hills to millionares, but claims to be some nasty from the hood.
You set up the match with him. let him know George will take a dive, and let him know that he is to keep betting on George until people pull him off, but with weak punches or you reveal all the dirt on his childhood.

These are all obvious BS phrases, right up there with “… resigned so he could spend more time with his family …”

Looks like the BMX camp discovered something and bailed. What? No idea. Maybe his cardiologist told him he’s too old and to stay out of the ring or he’ll drop dead with a ventricular aneurysm. Just a wild guess of course, but something’s up and they’re certainly not going to tell us what. I doubt that it really has anything to do with George.

Zimmerman is 13 years younger than DMX and was ‘training’ in MMA for a year or so as it was mentioned in the trial. (It was basically exercise for weight loss and the MMA-style personal trainer said George was no good.)

But that year is a lot to have over DMX if DMX never trained nothing.

Civilized people settle their differences and encourage brotherhood with a sporting match.

Best cancellation since that of Rosie O’Donnel’s talk show on OWN.

I was sad to see the fight cancelled. If George beat the crap out of DMX and then gave him a golden shower, that would just drive the libs insane to the point that I think liberalism would have to confront itself and change because in the ensuing insanity liberalism have exposed itself as nothing more than a wolf in grandmas clothing.