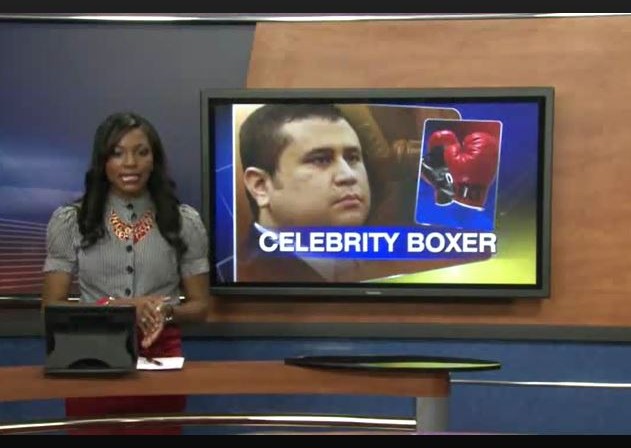 Apparently this is for real.

It’s official … X gonna give it to George Zimmerman — TMZ has learned, rapper DMX has just been named Zimmerman’s opponent in his upcoming celebrity boxing match.

Celebrity boxing promoter Damon Feldman tells us, DMX was selected out of 15,000 applicants … all of whom wanted a piece of Zimmerman in the ring after he issued the open challenge to fight anyone willing to take him.

But no one wanted to beat Zimmerman’s ass more than DMX.

As we first reported, DMX promised to massacre Zimmerman in the ring if he got the chance. To be exact, he said, “I am going to beat the living f**k out him … I am breaking every rule in boxing to make sure I f**k him right up.” He then said he’d literally piss on George’s face.

Zimmerman might actually have a chance though — as we reported, he’s been training pretty hard for months … oh yeah, and he’s only 30 years old. DMX is 43.The boxing match will be 3 rounds.

The money raised will go to charity. The fight is March 14, according to CBS – Philadelphia.

READER POLL – who do you want to win?

isn’t that an ’80s era bicycle with a banana seat?

He is an actor, of sorts. He played the bad guy in a Jet Li movie, Romeo Must Die and a few other B-or-below movies. He wasn’t particularly believable, but played right into the stereotype of a short-term-gain person with an atypical long-term strategy. His evil plan is foiled by the hero (which involved multiple kicks to the face, IIRC).

I think he has an album out, too. Most actors are terrible musicians, so I wouldn’t bother seeking it out.

… but will George be packin’ ?

posted this in tip line few days ago, georges family needs to step up and stop him from self destructing.
hes asking for someone to kill him now, suicide by public.

3 rounds in a celeb match is hardly public suicide. Especially if he’s been training already for a few months and was boxing as a hobby prior.

The fight is only a month away.

That being said: Has anyone released the tale of the tape on these two?

If DMX loses – it will kill his career. He will lose all credibility with the black community.

(Watch your ass, Dustin Diamond. George is coming for you next!)

until someone shoots/knifes/clubs him there.

It’s only pay per view no observers except fopr official people.
I suppose if the guy actually breaks the rules, there will be plenty of people to haul him away.

actually thinking outside of the building. hes self destructing.

Yeah, let’s see the numbers — height, weight, waist, chest, reach, neck. Based on that we’ll be able to handicap this card.

DMX was handpicked. This wasn’t by luck of the draw. George seems to have issues with fading from public view, IMO.

You really don’t have to be old to be unaware of who DMX is. You only have to be a person of good taste.

Ironically, DMX (“Y’all Gon’ Make Me Lose My Mind”) did a thrilling duet with the late, great Aaliyah with a chorus, “Just make this promise to me/That you come back in one piece.”

Prof., you should have included a “Don’t give a flyin’ Fluck” option in your poll.

I think you mean “Don’t give a flying Fluke.”

Since there was no “I hope they both lose” choice, I voted for Zimmerman to win. At least then we get to feast on the tears of our adversaries (schadenmunchies). But yeah, Zimmerman isn’t getting the “find a deep hole and crawl in it” message that most of us would if the most psychologically unstable third of the population wanted to kill us. He needs an intervention.

I’m holding out for Malkin vs Fluke or Palin vs Fey.

AWESOME. I’d pay to see that.

Why would anyone allow, for charity or not, any person who has said he will “break every rule” to basically kill an destroy George Zimmerman?

And, what will the media do with a Zimmerman knock-out, should that occur? Call him an even BIGGER racist for fighting back, for knocking out his boxing opponent?

I fully expect the bout results to be inconclusive, and I wager the only one to land any legitimate blows will be Zimmerman – the end result will be that the usual suspects will howl that it was rigged.

Oh man, this doesn’t look like a really smart thing to do. Isn’t this ripping a scab off something that should be allowed to heal? Surely there are more elegant (OK, ‘boring’) ways to raise money. Perhaps offering authentic white hispanic recipe cards for a donation would suffice.

It’s OK! Racism is a capitalist franchise now! Ask MSNBC! Ask the various ‘Reverends’! Sure, it used to be about human rights, but it’s all SHOW ME THE MONEY now, baby!

I don’t care who wins, but if somebody’s ear doesn’t get bit off, we all lose.

I thought DMX was the drug Trayvon was on

Zimmerman, do your continued appearance’s in bright lights, stem from A sense of guilt? Just go TO your easel and get OFF the stage, huh!

DMZ has been arrested for rape, a stabbing, animal cruelty, unlawful imprisonment, drug charges, and claimed to be a federal agent while hijacking a vehicle … Ideally he breaks every rule … as he promised, by attacking GZ in the parking lot with a knife … and GZ shoots him.

None of this is real … it is all prelude for a reality TV show, and in the final episode Trayvon shows up … that was staged too. Surely none of this insane drama could be real life. A black threatening to eff up Hispanic Jorge, then pee on him? This is Obama’s base … can’t he intervene? Or is this really just another Obamacare promo?

This is beyond stupid. Maybe if Zimmerman gets his face beat in and his butt royally kicked, he will get off the stage.

This is what many of us deserve who sent hard earned dollars to his defense fund? This is the sweet, kind, peace loving George Zimmerman who shot in self defense?

I, for one, am tired of defending the guy. He’s a major a*&h()e if you ask me. Ranks right up there with Tanya Harding, whom I believe also fought some stupid “charity”(although she was paid for her appearance)boxing match.

Pretty cool. The slings and arrows of outrageous fortune afflict us all. And it’s up to us individually to figure out how to handle them.

When you’re surrounded by bloodthirsty savages, what to do? Turn them into a spectacle, and rake in the cash! It worked for another fine American, Buffalo Bill, and it can work for George Zimmerman, too.

I’m starting to think that there’s some real substance to George, albeit in a PT Barnum sort of way.

Look, you can’t take the name Tom Swift but quote William Shakespeare. This is against internet law.

Is it racist that I voted for Zimmerman?

No, but it’s racist that you voted against DMX.

Trayvon was plain evil, but George is just plain stupid.

Also,
– George has dubious taste in women.
– George may suffer more brain damage in this fight than Trayvon inflicted on the sidewalk.
– George needs more therapy and maybe an adjustment in his meds.
– George and his women are trying too hard to milk the celebrity/money cow.

I’ve lost all sympathy with both George and the Martins.