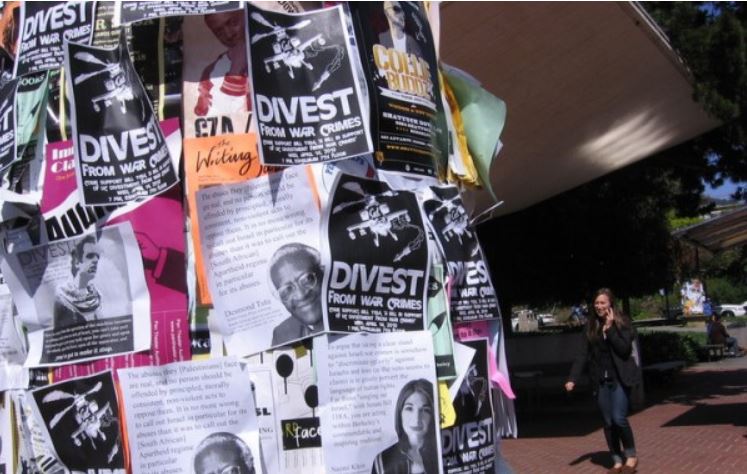 We have reported about legislation making its way through both the NY State Assembly and Senate seeking to stop state funds being used by state higher educational institutions to support groups that engage in academic boycotts.

The bills, though they have different language, are a reaction to the anti-Israel academic boycott passed by the American Studies Association. As I have stated before, I hope the legislature will review the language of the bills very carefully, since there certainly will be challenges.

Not surprisingly, claims are being made that the legislation violates the academic freedom of the boycotters.

Already a threat of a constitutional challenge was made in a January 30, 2014 letter to the legislature from the Center for Constitutional Rights, which has a working group devoted to supporting the anti-Israel BDS movement. The letter is embedded at the bottom of this post.

The gist of the letter is that this is an unlawful attempt to silence unpopular speech. The letter also misrepresents that the ASA boycott only targets institutions. That is false, as I described in my IRS challenge. ASA adopted the full scope of the BDS boycott, but issued non-binding guidelines that purport to scale it back. Even so, the boycott is directed at Israelis based on national origin, which already is unlawful under the NY State Human Rights law.

Jewish Voice for Peace, a group which uses the title “Jewish” to give credibility to its anti-Israeli views, is a big supporter and organizer of the SodaStream boycott. JVP has issued an urgent call to try to stop the NY legislation:

Action Needed this Weekend and Monday Morning to Stop Passage of Dangerous Bill in NY State Assembly This past Tuesday, Jan. 28th, the NY State Senate overwhelmingly passed a bill targeting the American Studies Association (ASA) because it recently passed a resolution supporting an academic boycott of Israel. If this becomes law it would prohibit public universities and colleges from using any taxpayer money on groups that support boycotts of Israel. For instance, such funds could not be used for travel or lodging for a faculty member attending a meeting of a group that supports a boycott of Israel. Just as dangerous, this law will lay the groundwork for other attempts to silence debate and opposition on other controversial issues.   A similar bill is quickly moving through the process in the NY State Assembly…we must act now to stop it! The Higher Education Committee of the NY State Assembly is scheduled to discuss their version of this legislation this coming Monday, Feb. 3rd. If they pass it out of committee it could go to the full Assembly for a vote 3 days from that. And since Assembly Speaker Sheldon Silver introduced the Assembly bill we can assume he will move to a vote immediately.

According to NY State Senator Klein, chief proponent of the legislation. “We need to marginalize the politics of intolerance whenever it rears its ugly head. I will not allow the enemies of Israel or the Jewish people to gain an in inch in New York. The First Amendment protects every organization’s right to speak, but it never requites taxpayers to foot the bill.” The reality is that this legislation is a direct assault on our First Amendment right to freely and openly speak our minds in opposition to the policies of any government, including the Israeli government. Imagine if legislation like this was passed during the struggle to end apartheid in South Africa!

What you can do:   1) Contact key members of the NY State Assembly. Talking points to help you focus your ideas are below.

(Added) Of course, that contact goes for supporters of the legislation, not just opponents.

This is like having the Ku Klux Klan argue that they get to meet and burn their crosses on school grounds, on the basis of “free speech.”

Even the Klansmen knew better than to try that argument! Klansmen get to march, on their own time, and without state sponsorship: they do not get to use the local elementary school as a meeting place, or get state funds to pay their transportation to cross-burnings.

I mean I’m against the boycott and everything, but isn’t there something to be said about either the state or the feds refusing funding, taking away tax exemptions, etc because they disagree with views expressed by a group? Granted, you have to draw the line somewhere, but recognize this is the next large tactic that will be carried forth by leftists groups against religious and religious non-profits that don’t support gay marriage or the transgender lifestyle. It’s already happening in CA.

When a tax exempt group decides to engage in political activism it usually violates the terms of the exemption. Same with funding.

” Granted, you have to draw the line somewhere, but recognize this is the next large tactic that will be carried forth by leftists groups against religious and religious non-profits that don’t support gay marriage or the transgender lifestyle. It’s already happening in CA.”

If you can tell me where that line is, I’ll respond by saying “Who gets to choose the line anyways?”

The whole “Gay marriage” thing is a red herring anyways. No one is denying gays the right to marry. A gay guy and a gay woman have every right to marry. The whole same sex relationship thing deserves legal protections, but it will never be marriage. The whole point is they want to re-define marriage into something akin to a square circle.

Wonder if they would feel the same way if the law removed funds from groups showing support for the Tea Party?

Simplification is needed. In the real world, people get fired when they are not doing the job that they were hired to do, when they violate company policy, or when they demonstrate any behavior that is likely to lead to losses.

Let’s clean it up locally first. Got to start somewhere.

Valerie, Leftists such as the BDS and ASA are the new KKK.