U. Penn students stand up for Israel

U. Penn students stand up for Israel

Not staying silent in the face of BDS hate. 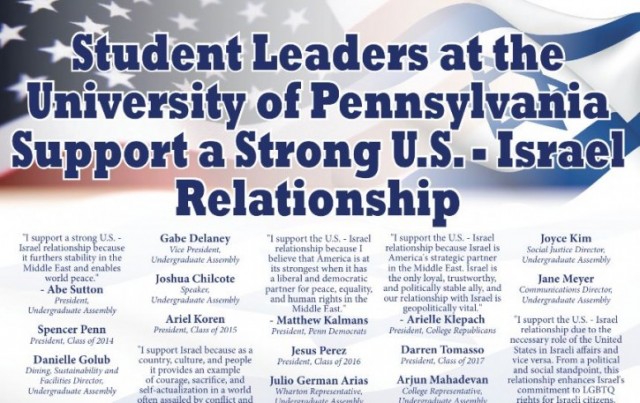 Because we focus so much on the Boycott, Divest, Sanction movement on campuses, it’s easy to get the impression that such anti-Israeli students are the majority.

They are not. They are just the loud mouths, who scream, call people names, and built idiotic mock walls and checkpoints — for which they never include mock suicide bombers or shrapnel backpack bombs for context.

While it is true that anti-Israel sentiment has grown among some sectors of the student body, students remain mostly pro-Israel or — like students tend to be — apathetic.

A case in point to debunk the myth would be The University of Pennsylvania, which has seen some of the worst of the anti-Israel BDS movement, as detailed in my post in February 2012, Anti-Israel sickness on display at U. Penn:

We have featured these anti-Semitic — yes that’s what they are by their actions – before, but they are far more vicious and devious than most people understand, and one of their primary goals is the indoctrination of college students into the anti-Israel movement.

This audio shows a U. Penn. professor discussing how to work anti-Israel agitation into classes that have nothing to do with Israel:

That U. Penn indoctrinator was Amy Kaplan, former President of the American Studies Association and supporter of the ASA anti-Israel academic boycott. Bet that doesn’t surprise you. She’s also Chair of U. Penn’s English Department.

So it’s good to see U. Penn. students standing up to these Propagandists with Ph.D’s.

Via the Penn Israel Public Affairs Committee, a wide range of student leaders have signed a pro-Israel statement: 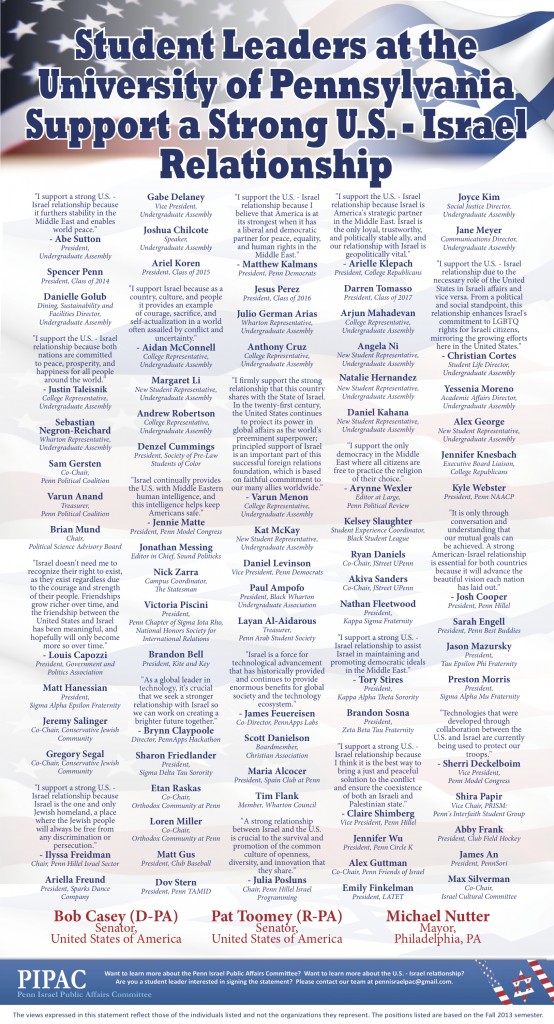 “Niemöller is perhaps best remembered for the quotation:

First they came for the Socialists, and I did not speak out–
Because I was not a Socialist.

Then they came for the Jews, and I did not speak out–
Because I was not a Jew.

Then they came for me–and there was no one left to speak for me. ”

I’m glad to see that there are those who won’t remain silent longer. The best defense against intolerance and bigotry is to face it head on, expose it and ridicule it.

This is also the beauty of the 1st Amendment. It allows those bigots and intolerant people to expose themselves, saving the rest of us much hassle and allowing us to debate in openness and expose the ignorance and hatred that much easier.

The video has audio of an English professor explaining how Palestine can be worked into classes that have nothing to with Palestine. She states if an instructor is doing literature about prisons, Palestinian lit regarding prisons is possible.

It is relevant if the course is Prison Lit 4101, Palestinian Lit, or Arabic Studies. The last is probably a fairly common course, and one many students are already sympathetic, the first two not so much. Other than that, what other course of studies might prison literature of Palestine be relevant.