It’s not about Christie. 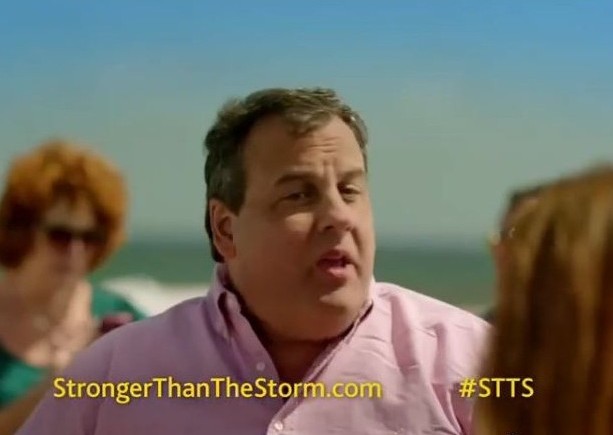 The other day I tried to make the distinction between dislike of Chris Christie, and joining the media mob which eventually will turn on Republican candidates you like. I told you not to feed that beast.

This is not about Chris Christie. It’s about any number of other Republican candidates who will be met with the same faux-outrage and media-led obsession a year from now as the 2016 field begins to define itself.

It’s getting worse, as the feds are piling on. Within days of Bridgegate, Eric Holder and the U.S. Attorney’s Office were on the case.  Funny how quickly the feds move against a potential Republican contender.

Now the feds are piling on some more by leaking that they are investigating this ad paid for with Sandy relief funds.  That ad, Jim Geraghty points out, was Approved by Obama Administration:

Featuring a sitting Governor in tourism ads is completely routine. It gives a personal touch to the tourism campaign.

Here are other examples (via Louise Mensch):

And one featuring Obama (also via Louise Mensch)

I’m calling BS on this tourist ad investigation. And so should you, even if you don’t like Christie.

Someone should tell Benedict Christie to make sure he remembers who is backing his big ass when he is down.

City is down and chance to buy votes…Obama

Christie is down and votes won’t be gained…Republicans

Yup Christie is learning that triangulation means you eventually end up in the middle of 2 firing squads. Et Tu Obama

To the Dems and to the Media (no difference) – Republicans will ALWAYS be the enemy.

Christie willingly chose to befriend Obama and the dems at the expense of the republicans (and even moreso the conservatives) during the 2012 elections. He decided to lie down with dogs…now he gets the fleas. Too bad.

Christie lost conservatives and especially Tea Partiers long before this bridge closing kerfuffel, based solely on his positions on the big issues. He’s basically a center-right Democrat.

I don’t begrudge Christie buddying up to Obama and the Dems. That’s effective (if nauseating) politics – for a NJ governor facing reelection, that is. The same action becomes a career killer on the national scene for a Republican who pretends conservatism, however. Christie knows this, made the decision, and will struggle to impress conservatives – again, based more on the political positions he’s established than on hugging Obama or the bridge thing.

I kinda see it differently.

I see the GOP reading from the same playbook. They don’t just write off conservatives, they oppose them.

Why? Because they now see that conservatives cannot be moved. Cannot be bought. Cannot be BS’ed.

So, like with Boehner and his minions in the House, they will cast their lot with Democrats. They can be moved, bribed, and lied to.

Banking that there are more disgruntled moderate democrats willing to overlook the “R” than there are Tea Party types.

Rove and the Chamber of Commerce are crying in their soup. He was probably going to be the next RINO they’d back for President.

Christie and his inner circle are not ready for prime time, period. Petty people without the skills for the national game playing petty local politics. The last thing the country needs is Jersey thugs taking over for the Chicago thugs because we’ve all witnessed how well governance by thuggery works.

That a “moderate” Republican hopeful has imploded this early in the 2016 game is a good thing. Better now than twelve months from now. Christie’s flaws are his own doing and not the responsibility of folks who point them out, whoever they may be. This is all 100% about Chris Christie. Concerning ourselves with who’s piling on and to what degree it’s acceptable is a distraction we don’t need. It doesn’t help that the guy’s personality just invites enemies and allies alike to poke him in the eye with a sharp stick. Proof that what sells in New Jersey doesn’t necessarily sell elsewhere.

Hopefully these will be Christie’s final days in the pantheon of ‘pub slimelight seekers who blow it.

Christie bet on the wrong horse. He should have stayed away from the track and stuck to floating over sports arenas.

I would suggest Republicans start looking around for alternatives to regulars promoted by the elite, Beltway media and politicos. A nice, hard-working Governor of a successful state. North Dakota perhaps?

And, as a Democrat, I will suggest they do much the same. Hillary Clinton is sending no tingle down anyone’s leg among the Dems I talk to — despite MSM reports to the contrary.

A GOP governor likely to win my support would be Scott Walker of Wisconsin. No offense to Governor Dalrymple, but too many people never heard of North Dakota, let alone it’s governor.

Al Sharpton would be an even better choice.

I won’t shed a tear for Christie if he is finished. He doesn’t share my conservative values. I don’t share his RINO values.

I will work in the GOP primaries to get a Tea Party candidate.

That being said in Nov. 2016 I will vote for the most conservative candidate on the presidential ballot even if it is a RINO. But I won’t donate a penny to any RINO.

It is not like there is any benefit to Conservatives if Christie is defended. He is not a Conservative, at best he is a typical “Democrat in Institutional Republican clothing”. Defending him could allow the Institutionals to continue using him as a stalking horse for their next designated loser, if there are elections in 2016.

If Christie is taken out by what from his point of view has to be “friendly fire” I will take it as a bonus. Defending Christie, or indulging in Schadenfreude will have no effect on the tactics used by the Governing Party against us.

That’s right. It’s never a good idea to take up sides with your enemy, no matter if his opponent is also your enemy. Let ’em battle it out and may the lesser POS win.

But it looks like the ‘rats have Christie on the run, and he’s going to be toast. The ‘rats have the most powerful weapon of all, the media, so they’re all going on the offense hard and early because they’ve got the political pariah of obastardcare hanging over their heads. Add to their media advantage millions of fat, ignorant, unemployed, public school-educated voters sitting on their lard butts watching American Idol and Seinfeld reruns, and we’re all set up for a 2008/2012 rinse and repeat.

Christie doesn’t defend my 2nd Amendment rights, I see no reason to go out of my way for him. The more Holder goes after these ridiculous “problems,” the more likely the public will see through his nonsense – like using “disparate impact” of school discipline to allow black miscreants to get off scot-free, which I can only presume is a trial program for his new policy on felony assault.

I do find it ironic that the same people who spit on the ground when it is suggested they defend Christie are among the first to indict him and other “RINOs” for not defending their own heroes, and sometimes for defending them without sufficient enthusiasm.

I no longer expect RINOs to show respect. They should not expect respect for them from me either from now on.

The Democrat Controlled Media can and will pile on on any potential GOP winner of the 2016 presidential race, regardless of anything the Tea Party may or may not say or do with regards to Christie.

Christie and his RINO pals publicly declared war on the Tea Party. Way wrong move, in hindsight… now they want the Tea Party to back Christie up?

Perhaps this lesson will be learned by the Establishment GOP, but then again, maybe not.

Rally Conservative pushback for Christie? Yawn. Let those he sucked up to defend him. Conservatives always get shafted by the LSM; defending Christie won’t change that, so why bother? When he was riding high, Christie was blowing off everybody but the Democrats. Well, hey Christie, carry on.

Perhaps Christie’s islamist friends will come to his defense.

So, the feds are investigating Chris Christie for improper use of Sandy relief funds?

Would this be the same Chris Christie who publicly bashed the tar out of House Republicans when we shouted about all the pork in the Sandy relief legislation?

I don’t particularly care for Christie, but I really don’t care for conservatives who are suckers when the big media calls for the destruction of one of the Republicans we may not like. Show some spine, people. Defend the guy until and unless he’s been proven to have caused Bridgegate.

Maybe Benghazi needs to be pushed back onto the front page, ya know?

How many times do we have to shout that our failure to support Christie has nothing to do with Bridgegate, that we didn’t support him long before Bridgegate?

Fine, don’t ‘care’ for us. It is clear you don’t listen to us, so your pique must be based on something other.

Chris Christie should get all the support and encouragement that he gave the nominee of his party for President.

Maybe he should hug Obama again. That might do the trick.

Michael Medved, a moderate ‘Ican, called for Christie to remove himself from the race for the presidential nomination on his radio show today — so he can devote his energies to fixing NJ. Christie is losing support of even the moderate ‘Icans.

This is about Christie’s weaknesses and keeping Obama’s various scandals out of the spotlight. Supporting Christie will do nothing to keep the media from ravaging the next front runner. May as well keeps one’s powder dry until a candidate worth defending come along.