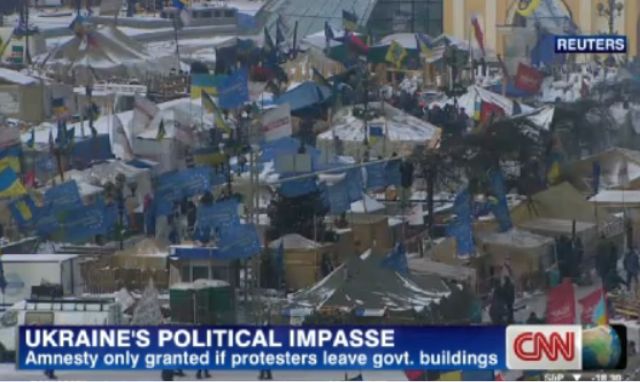 The press office of Viktor Yanukovych announced Thursday that the President of Ukraine would take a sick leave for an indefinite period of time, prompting uncertainty amid continuing tensions in Ukraine.

Ukraine’s president and his opponents accused one another of sabotaging efforts to end the political crisis Thursday, as an unexpected presidential sick leave further damped hopes for compromise.

President Viktor Yanukovych’s absence was quickly denounced by his opponents as a case of executive malingering in a country where politicians have in the past delayed one another in parliament by throwing eggs, padlocking the doors and body-blocking the rostrum.

The Ukrainian president’s office issued a statement saying Mr. Yanukovych, 63, is taking time off from work because of a fever and respiratory illness. The statement did not indicate when he would return to work.

Prime Minister Mykola Azarov and his government resigned on Tuesday, in an attempt to appease protesters.  Parliament also voted to repeal or modify many of the anti-protest laws that had been passed in mid-January and sparked escalating violence.

But Yanukovych must sign the repeal from Parliament and it is not known whether or not that would occur while he is on sick leave, according to the Associated Press.

Just after the announcement of his sick leave, the president of Ukraine defended his handling of the ongoing crisis there.

President Viktor Yanukovych defended his government’s handling of the political crisis in Ukraine on Thursday, saying that it had “fulfilled all its obligations” and that opposition leaders were stoking people’s anger for their own gain.

The opposition “continues to escalate the situation” and to encourage people to maintain their protests in the icy streets, he said in an address posted on his website.

“I think that is wrong. We must understand that there is no future for the state and people if political interests of certain groups are set higher than the existence of Ukraine itself.”

Yanukovych insisted the government had lived up to “concrete agreements” reached with the opposition to try to end the crisis. “The government has fulfilled all its obligations under these agreements, including the adoption of the Law on Amnesty that guarantees freedom and liberation of persons arrested during the conflict,” he said.

The issue of amnesty however remained a sticking point for protesters, as it is tied to conditions that they vacate occupied buildings and dismantle encampments and barricades – conditions protesters oppose.  It also stipulated that after 15 days, if buildings weren’t cleared out then police would take action to clear them, according to the NY Times.

Despite any concessions to date, protesters have also previously indicated they want the president to resign and new elections to be held.

Are there Islamists involved in this? Is this another Islamist* Spring takeover?

Putin has severed diplomatic ties with the Ukraine.

The GOP-e seeks a role like that of the Russian Orthodox Church from late Stalin to 1989. Conservatives and tea partiers prefer to be more like the Ukranian Greek Catholic church during the same period.

Bishop Borys Gudziak explains what is going on in Ukraine: http://media01.radiovaticana.va/audiomp3/00410910.MP3

There are some good reasons to think the pope ( don’t know the name ) in power set the flames of Yugoslavia . There is a 1600 year battle that one would need some theological knowledge to understand between orthodox & catholic . Somewhere in there , there are the branch in Syria & the ME which are Greek Orthodox Catholics .

I know that only Orthodox are allowed into the church on Mt Sinai . Under the orthodox this includes the locals who are Greek catholic orthodox.

But could we see the abominable Catholic vs Orthodox war 1991 onwards? Catholics won the PR battle but I can recall British officers just sickened by coming across buildings ful of people held hostage & burnt by the Croats

Politics is one thing & I have no problems with tomato throwing etc in lthe legislature ( unlike the wsj ) .
We do not want a religion based war.

Perhaps in a dacha in the Crimea. The Black Sea isn’t so bad this time of year. Perhaps he’ll swing by Sochi.

Yanukovych is done and he knows it. His supporters, who are pro-Russian and very much pro-themselves, will find a replacement and try to convince the people that the replacement is the only reasonable person to support. They certainly will try to rig the elections that will have to come.

Ukraine is about 20% Russian in ethnicity, and a fair number of the Ukrainians who live in the eastern half of the country are pro-Russian in their politics and daily culture. The western Ukrainians are more likely to be pro-European. This is the sort of political, ethnic and cultural split that won’t be easily healed.

Dacha in the Cimea — LOL! Sochi can be good for his health, he’s sick, right?
Ukraine is a divided nation, about 50%/50%. Maidan doesn’t have a simple majority behind them, and Yanukovich is unpopular. They might rig the elections, or they might win them fair and square… or both.
The sooner it ends, the better for everyone, except Putin who would love to exploit the conflict.