Was Dem challenger in NY-23 against the SAFE Act before she was for it? 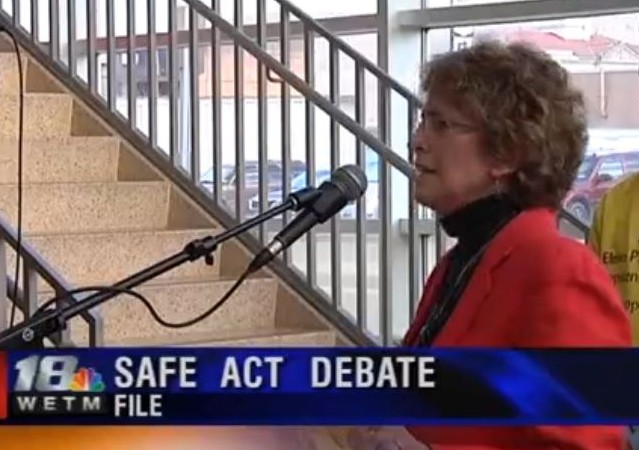 NY-23, my home district, is a focus for both parties for 2014 because it is one of only a few competitive districts.

The district is geographically enormous, a mostly rural area running along the Southern Tier of upstate New York. Once you leave Ithaca, it’s a whole other country.

Which is why incumbent Republican Tom Reed should be okay by a few percentage points.

2nd Amendment rights, and opposition to the NY SAFE Act, are big issues.

Tompkins County, which includes Ithaca, is the exception. Tompkins County is one of only two upstate counties which has not passed a Resolution opposing the SAFE Act. 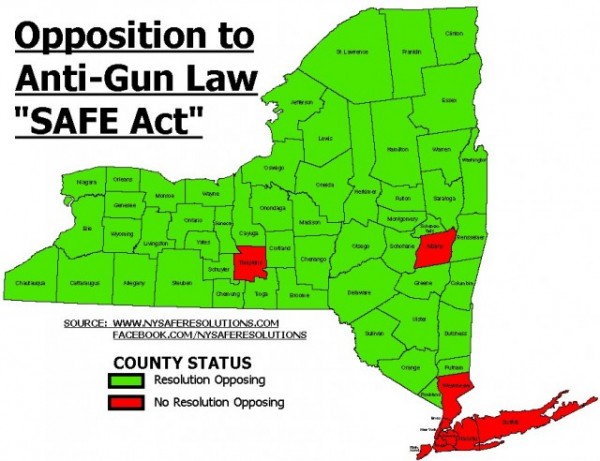 Guess who was the Democratic Chair of the Tompkins County legislature: Martha Robertson, the Emily’s List-backed challenger to Reed.

The SAFE Act is in play in the race because of Robertson’s confusing voting record, where she appears to have both voted for and against the SAFE Act.

Local lawmakers are calling on congressional candidate Martha Robertson to state her position on the New York SAFE Act and 2nd Amendment rights.

Of the 11 counties in the 23rd Congressional District, 10 of them have passed resolutions calling for the repeal of the SAFE Act. Tompkins County, where Robertson serves on the legislature and was Chair of the Legislature until the beginning of this year, has not.

Robertson voted against a resolution in support of the SAFE Act in April of 2013, but some local Republicans say that isn’t good enough. An open letter has been circulating around Republican committees throughout the 23rd Congressional District calling on Robertson to explain her position on the SAFE Act and 2nd Amendment rights.

“It’s very important for sports enthusiasts, gun owners, and defenders of the 2nd Amendment to know where their candidates stand on the issues and we’re asking Martha Robertson to take a stand on the issue and oppose the SAFE Act,” said Rodney Strange, a Republican legislator in the Chemung County Legislature.

“She’s still not making a full statement stating that this is not legal, it’s not good legislation, and I’m fully against it,” said Edward Fairbrother, Town Supervisor in Big Flats.

WETM-TV reached out to Martha Robertson’s campaign Wednesday, and they responded, releasing a statement that said, “ …. Martha opposes the SAFE ACT and voted against it – period.”

The minutes also show that Robertson “yes” on a motion to refer the resolution in support of the SAFE Act to committee, but then voted against it on final vote….

My own inquiry to the campaign on Robertson’s SAFE Act position has not been returned.

I also inquired for the 3rd or 4th time about whether Robertson had hired a forensic computer expert to back up her claim that GOP operatives tried to take down her fundraising website, something she promised to do. But still no response.

Update: Although this report focuses on upstate areas outside the district, it is a good indication how deep the opposition runs upstate. That even an Ithaca-area liberal like Robertson now is running away from the SAFE Act tell you everything:

It seems to me the situation in New York is indicative of a major breakdown in representative government. In Colorado, when the progressives did an end-run around the public to ban guns, the populous held a swath of recall elections, and is on the path toward repealing the laws.

In New York, people have gone straight to state wide civil disobedience. Cumo may think he has won and that nobody can do anything to stop him, but I suspect all he has done is created a massive powder keg.

SAFE opponents would certainly have started recall campaigns if that option were available in New York. Recall legislation has been introduced as late as 2013, but (surprise!) has scant traction in the Legislature.

In this instance, it’s probably better that New York doesn’t have provisions for recall. Civil disobedience is the thing wherein citizens will catch the conscience of the king.

“Nice” to see that the county of my birth, Westchester, is so “supportive” of the 2nd Amendment.

I am so glad that I left NY when I did.

Chin up upstaters! Don’t let those schmucks in the NYC metro area push you around.

Once you leave Ithaca, it’s a whole other country.

You mean … they don’t take Ithaca Dollars in Caroline?

Recall Senator Kirsten Gillibrand: she was for gun rights before she went to Washington, now she is for registration & near total confiscation. It is Democrat dogma that guns are bad. And in Ithica of all places this should be a no brainer.

let me explain how politics works. Gillibrand goes to Washington and gets TOLD by Chuckie boy how to vote,when to talk and who to talk to or else you won’t have any comittees, no staff and you get a office in the basement. Worst of all,you’ll get no backing from the “party” at re-election time. The problem is Chuck Schumer.

The southern part of western New York is “upstate?” I always figured that was the northern arm…

The simple fact is that gun control – and as much of it as they can get – is a Democratic party core value. The Republicans could make hay by emphasizing that, but of course they won’t.

Martha is a bottom-feeder.I contacted all the legislators to get them to pass a proposal to REPEAL the SAFE ACT and had no luck with all the Progressive Democrats.Like most Liberals they’ll lie to your face to further “the cause”.Martha is the worst of a bad lot.

In order to beat Andrew everyone has to vote. There has to be events all across the state this summer to keep people pumped up. Forget Albany, they don’t care, it’s the rest of the state that will run Andrew out.