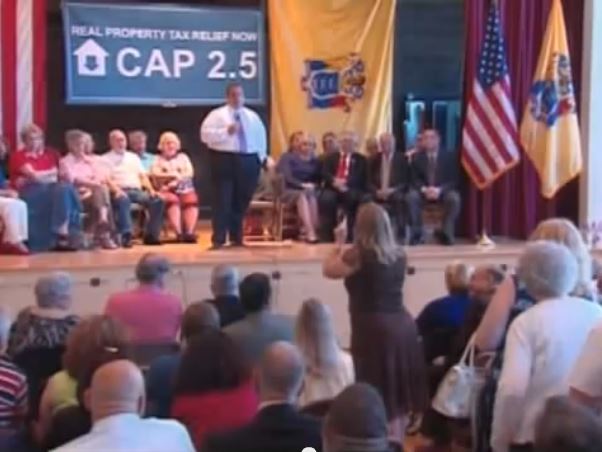 This is how they do it, do it.

Build up Chris Christie as the refreshingly moderate, blunt talking, cure-all for the “extremist” wing of the Republican Party.

From the NY Times on Christmas Eve, Stories Add Up as Bully Image Trails Christie:

It was the governor’s penchant for confrontation that first propelled him onto the national stage in 2010. As he pushed to cut public employee benefits, his staff celebrated video clips of him dressing down teachers at town hall-style meetings by posting them on YouTube. (“You want to come up here? Come up here,” the governor said to one teacher, a fellow Republican, who hesitated until the governor’s security state troopers gave him no choice. Wagging a finger, Mr. Christie lectured the man, then dismissed him from the hall.)

But his confrontations are not always that public.

Cue the laundry list of “victims” of the Bully Boy of Bayonne.

I just don’t know why they didn’t wait until after he got the nomination, or at least announced he is running.

Just a bit too Ready for Hillary, I guess.

He may be a bully but he was correct in that tape. Teacher pay is funded by taxpayers and negotiated by UNIONS!!!! If she wants $3/student then she needs to take it up with her union. Maybe if she didn’t have to pay union dues, she’d make more money. As for the library….. get out and fund raise to support the library. The taxpayer can’t pay for every little thing that some people use more than others. NJ is essentially bankrupt. Corzine never saw a dollar he couldn’t spend to stay in politics.

To paraphrase Hillary Clinton, what difference does it make?

Which kind of indicts New Jersey more than recommends Christie.

The bullies are the Evil-Stream Media (formally MSM about 70 years ago.)

tbh he’s always been a bully. just never understood peoples fascination with him.

He is definitely a bully; I never bought the “refreshingly blunt” thing, especially when he bashed (including name-calling and other ad hominem attacks) conservatives, libertarians, and TEA Party patriots for not supporting Sharia in NJ public schools, for not supporting the AGW hoax, and for not going all-in on amnesty.

Christie’s no conservative, and his bullying is taken from a page out of the regressive handbook (i.e. Rules for Radicals).

That more than confirms my suspicions…

May it be the Kiss of Death for Christie’s hopes.

Considering the fact that Hillary is a flawed candidate, there’s a lot of tearing down to do to properly set the table, so to speak, for her run. Besides, it also deflects attention from Obamacare and the dishonest occupant of the WH.

Use him to kill off the others, then kill him off. Standard operating procedure.

The Times ran the story on Christmas Day, next to Herod Raises Revenue.

They’ve turned on him too quickly. Remember they did start trashing McCain until he had eliminated all the conservatives.

Well, there weren’t any conservatives in that race, but you get my point.

po’ Chrissie-poo…. there he spends all sorts of effort sucking up to the MFM and trashing real conservatives, just like a good little house RINO is supposed to do, and now they turn on him.

couldn’t happen to a more deserving scum-bag. a pox on his house and i’ll never vote for the scumbag. the lesser of 2 evils is still evil.

He did not do Christine Wjitman any favours jumping down that man”s throat at her qustion & answer session.

She should have shit him on the head with a 1987 Hewlett Packard.

There’s a candidate out there who doesn’t have to sleep with the enemy or apologize for his beliefs to get elected. Not sure who it is, but I’ll vote for him when I see him (or her).

Scott Walker, for one.

Really? No one saw this coming? We don’t remember how McCain and Romney got the nominations? Media build ups and then levels them.

Shouldn’t he be floating over a sporting event somewhere?

It’s a head fake by the NYT. The media has decided it wants christie for the GOP nominee in ’16.

They’re applying any and all schemes to manipulate the voters into voting for him despite his unconservative views and actions.

First they made him out to be a tough guy and against all the shibboleths of the right. Now that we’ve seen they rooting for him, they’ll come out a bit against him to do a reverse psychology thing so we won’t think they want him as our candidate.

Expect them to do a number of these back and forths over the next 3 years but the main thing is to keep him in the public eye.

they understand that name recognition is king in driving polls and polls can be used to drive opinion and thus votes.

Christie is a liberal and not the man to change DC politics or lead the country.

The media meme that Christie is a bully might be inadvertently true. Breaking news:

“Private messages between Governor’s Christie’s deputy chief of staff and two of his top executives at the Port Authority reveal a vindictive effort to create “traffic problems in Fort Lee” by shutting lanes to the George Washington Bridge and apparent pleasure at the resulting gridlock.”

In this case the media meme is true.