Deaths in Ukraine amid clashes between protesters and police

Deaths in Ukraine amid clashes between protesters and police 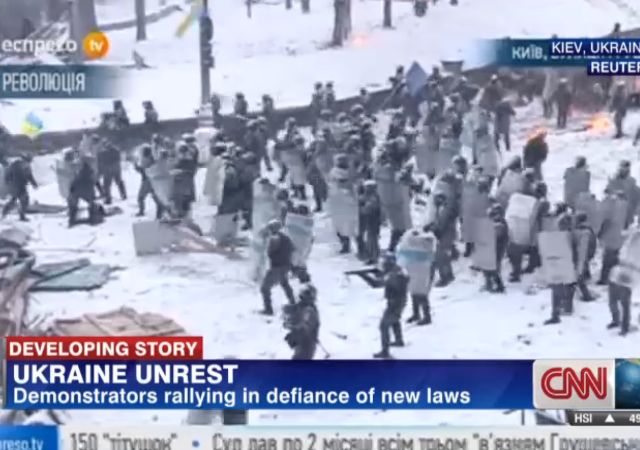 Several deaths have been reported after ongoing clashes between protesters and police continued in the capital of Ukraine.  The number of deaths seems to differ among various outlets and the circumstances around some of the deaths appear to remain under investigation.

At least four people have been shot dead and hundreds injured as demonstrators clash with police over new laws limiting the right to protest in Ukraine, the head of the protest movement’s volunteer medical service, Oleg Musiy, told CNN on Wednesday.

Ukraine’s Interior Ministry earlier said it was investigating a death, the circumstances of which are not clear. Local media reports suggest the man may have fallen from a statue or monument.

“Increased tensions in Ukraine are a direct consequence of the Ukrainian government’s failure to engage in real dialogue and the passage of anti-democratic legislation on January 16,” Harf said. “We urge the Government of Ukraine to take steps that represent a better way forward for Ukraine, including repeal of the anti-democratic legislation and beginning a national dialogue with the political opposition.”

The scenes described on the streets of Kiev, Ukraine depict the continuing conflict as police tried to take back control of some of those streets.

On the streets of Kiev, police fired rubber bullets and twice smashed through protesters’ front lines, lashing out with batons as defenders scattered. Demonstrators fought back with fireworks and, after police retreated, set fire to piles of tires, sending plumes of black smoke into the air.

As darkness fell amid freezing temperatures, thousands of men and women poured onto the nearby square, the main center of protests since November, filling sacks and plastic bags with snow to reinforce barricades.

Banks, cafes and shops in the surrounding areas shut early, and the government handed police more power to close access to areas of Kiev. After the three-hour meeting with Mr. Yanukovych, opposition leaders said authorities were preparing a full-scale crackdown to clear the square.

In an attempt to help deescalate the conflict, Ukrainian President Viktor Yanukovich met with opposition leaders for about three hours on Wednesday, according to Reuters.  But that meeting did not appear to produce any immediate resolution.

“We did not receive any answers,” Klitschko told demonstrators after the meeting, referring to calls for snap elections and the resignation of the government. “When we talked about canceling the new laws that make each of us here a criminal, we heard that maybe this can be a point of negotiations. I will be with the people. If I have to fight, I will fight. If I have to go under bullets, I will. I will stand up for the people, because I want to live in a different country.”

He added, amid the chants of supporters: “If tomorrow the President does not make a step forward, we will attack.”

The Associated Press reported that opposition leaders asked protesters to refrain from clashing with police for 24 hours.  The leaders presumably will await any potential next move from the president to negotiate, if there is any.

Protests over the last two months had remained largely peaceful until the most recent clashes.  Opposition leaders have frequently called for protests to remain peaceful, but some elements have splintered off into violent clashes with police.

Collection of photos at Mashable

You can also follow hashtags for #euromaidan, #kiev and #kyiv

Yes things are getting fiercer,whether it is saboteurs or Uke is on the move . It is still a fine line – EU citizens do not want more mad crazed ideological kulaks wandering through their nice streets. Russians that visited had money to spend , Ukes are beggars.

I’m not sure I know who is a saboteur there and who is for real and who purchases what kind of protesters.
They had a nationalist president who turned out to be a crook and deflated. Now they have a pro-Russian president, also a crook. What’s next?

The answer is blowin in the wind my friend .

The bottom line is that Ukrainians are quite poor & should not be .i know very well how Russians were sent back to being peasants under Yeltsin & then some became mega rich but overall there were improvements after Putin.

The EU wants Ukraine but the European people do not. Poland provides all the white cheap respectable labour they need. Uke’s only bargaining chip is having the gas lines run through it .

Btw a similar situation is happening in Thailand . Both have very good looking women so maybe that is the problem .

You are awfully sensitive. Why is that?
I wrote a post siding with moderate nationalist sentiment in Ukraine. As it happens, Ukraine has a long bloody history with anti-Semitism, and that has to be acknowledged. I said that contemporary anti-Semitism in Ukraine now is not what you’d expect it to be, and that even Svoboda has bigger fish to fry.