Premiums are just half the story, the deductibles are the killer. 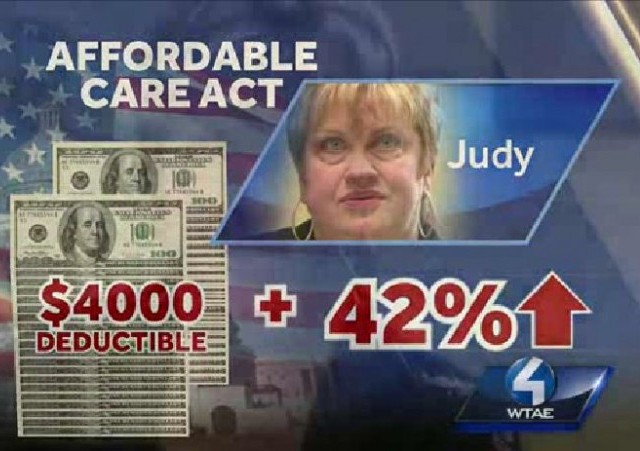 Here is a good example of what is happening at small companies around the country.

Look at the numbers,” says the reporter of two employees. “Jeff and Dave used to have a $1,250 deductible. Since Obamacare went into effect, it’s now jumped 60 percent to $2,000. That’s nothing compared to Brian, Kristi, and Judy who have kids. they are going to pay twice that, four grand.” The reporter adds that co-pays are being increased, too.

Another worker adds, “They call it the affordable health plan. There’s nothing affordable about it. I can’t afford it.”

saw this earlier today and posted on my media section too
https://www.theconservativevoices.com/media/cat/political/pennsylvania-small-business-hit-with-skyrocketing-health-costs-from-obamacare-r662
we tried to warn people, and so many IGNORED the deductible issue.

This is going to happen in every workplace in America, we are screwed. November will be interesting for sure.

Large companies self-insure and only hire firms, mostly health insurance ones, to administer their programs. It’s my understanding they aren’t going to be forced to hurt their employees like this.

I think ‘your understanding’ is faulty. Because the new rules require more different types of coverage – big employers will be implementing changes, too.

IBM just dumped all their retirees off it’s healthcare plan. So, accept that we are all getting bit by this law.

Absolutely none of this is misaligned with Obama’s state of mind. He hates Americans. Absolutely loathes them, us.

Therefore, it’s great to render us unable to afford our own care, while we enable tens of millions of foreigners to have free care.

People trying to figure out how this is affordable, are looking at affordability for the wrong people. For the foreigners on medicaid, it’s imminently affordable.

You hit the nail on the head, Karen. It’s the same deal with jobs. He doesn’t want Americans working. He wants the illegal foreigners coming in, giving the finger to our laws, and reaping the benefit of our labor. To his mind, it’s payback for years of American colonialism and raping of the resources of other countries. Don’t ask him to show you a country where that is true, though. The delightful thing for hi. Is that it’s not the big foreign corporations that are screwing us over, by his design, it is the people from the country he thinks we wronged—as if buying and having land ceded is doing a country and its people wrong,

That has always been the problem with the Bitter Clinger Europeans. They are eaten alive – as with a cancer – by their evil envy of America.

Well! What do you expect from a non American?

That has always been the problem with the Bitter Clinger Europeans. They are eaten alive – as with a cancer – by their evil envy of America.

Oops! That should have gone in this position.

Or getting free care in emergency rooms.

As painful as this is to watch, is there perhaps an unintended benefit to be realized: The large deductible plans (I have one) will encourage/force people shop around for better deals (emergencies excepted of course). Will this bring much-needed market forces to bear on exploding health care costs?

A high deductible catastrophic policy is only effective if there is a substantial reduction in premiums and all the obamacare and state mandates have killed off those type of policies. If you’re paying insane premiums for mandatory services you don’t want and will never use, where are the opportunities to save money for the deductibles?

Huge deductibles and co-pays will be foisted off on Doctors and Hospitals. Many will go bankrupt.

This is all by design. Kill the current healthcare system and declare the government must sail in to save the American citizens by developing universal healthcare with a new FICA deduction and mandatory employer “matching payments” for all businesses regardless of whether or not anyone can afford the price tag.

I saw this somewhere but it is so true: Don’t attribute to design what incompetence can explain. These people are not that bright. This is simply an epic failure.

“Never attribute to malice that which can be adequately explained by stupidity, but don’t rule out malice.” [emphasis added]

Well, that’s not what I saw but I do like the first half and truly believe Obamacare is the result of abject stupidity. I do not give them credit for doing this purposely. To do so elevates them to geniuses. You want to believe that? Fine, go ahead. They effed up, plain and simple. They know it.

When you have the truely abjectly stupid Criming their way to they top….they truely know nothing.

They waste all their time pretending (lying) and trying to impress with who the “know” instead of what they know.

They will still use this as justification for ever more control.

Not likely the public will entrust the entire health care system to the very people who have screwed it up this much this quickly.

So? The majority of the American people were opposed to Obamacare before it was passed into law, but here we are – stuck with it anyway. I agree with you that it is unlikely “the public will entrust the entire health care system to the very people who have screwed it up this much this quickly,” but I do NOT believe that our disapproval will count for anything. Look at all the other stuff that’s been rammed down our throats for lo these many years. We do not have a representative government, and we are not in any way a self-governing people. What we want and what we don’t want do not matter in the least.

For decades, Americans have been bombarded with lying visions of the wonders of state-run health care: Cuba, England, Canada. Nobody has told Americans that the biggest Communist country in the world has a ruthlessly user-pays system. You don’t pay, you don’t get care. The doctors say they want to be generous to needy patients but can’t because they only get paid when the patient pays, and the patient payment receipt slip must be given to the doctor before consultation can begin. The doctor gets paid a bit less than a dollar a visit, and that cost has been rising. The point is, if you have a decent job, you can pay your doctor out of your pocket. Major illness needs catastrophic coverage but they don’t seem to know how to deal with that on a large scale yet.

Wouldn’t you just love to know how many of those getting
“deep sixed” by ObamaFail actually voted for the fraud?

funny, dem leaders in congress say they implemented this as a step to single payer and people still don’t believe it.

For over 40 years, politicians have been equating health insurance with health care. Now we will have a few more people with policies that cover just about everything but lacking the funds to benefit from these policies because of high deductibles.

Young People’s Health-Plan Options Are Fine, as Long as You Ignore the Deductibles!

I know some said that, but I don’t believe they envisioned the roll-out of this plan to happen the way it actually did. They expected people to laud the results, not abhor them as is happening. This monstrous display of incompetence will not help them reach their goal of single payer. The pitiful thing is our dear Republican leaders will take this advantage and manage to turn it into a negative by election time.

Then it is time to put the old GOPpers on the next iceberg.

It isn’t just premiums, deductibles, and co-pays. ObamaCare also affects the doctors, hospitals, and medicines that they will pay for. I was appalled to find that most of the policies available through the exchange in Colorado paid nothing out-of-network. Their yearly caps don’t include out-of-network costs, nor medicines not on their formulary. Don’t plan on traveling out of state, until and unless you have made sure that you have some out-of-network coverage, either directly, or at least with the yearly caps.