Media finally finds something to be outraged about. 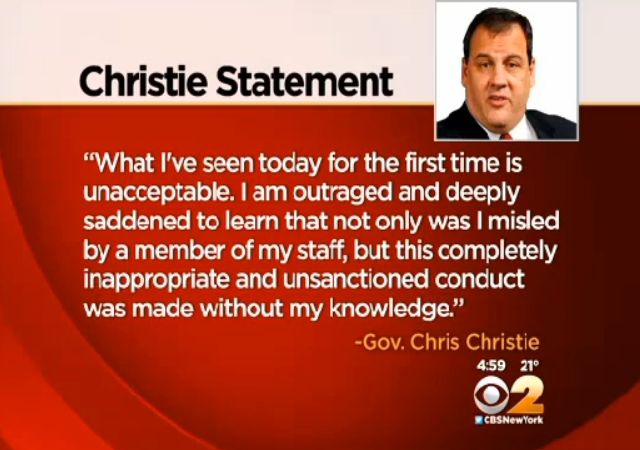 New Jersey Governor Chris Christie issued a statement late Wednesday in response to the reports that a top staffer from his office and others were involved in controversial NJ lane closures at the George Washington Bridge.

In his statement Wednesday, Christie said he was misled by a member of his staff and called the conduct “completely inappropriate and unsanctioned.”

“What I’ve seen today for the first time is unacceptable. I am outraged and deeply saddened to learn that not only was I misled by a member of my staff, but this completely inappropriate and unsanctioned conduct was made without my knowledge. One thing is clear: this type of behavior is unacceptable and I will not tolerate it because the people of New Jersey deserve better. This behavior is not representative of me or my Administration in any way, and people will be held responsible for their actions.”

If you missed the background on the story, you can read more at The Record/NorthJersey.com. Here’s a quick summary from the site:

Private messages between Governor’s[sic] Christie’s deputy chief of staff and two of his top executives at the Port Authority reveal a vindictive effort to create “traffic problems in Fort Lee” by shutting lanes to the George Washington Bridge and apparent pleasure at the resulting gridlock.

The messages are replete with references and insults to Fort Lee’s mayor — who had failed to endorse Christie for re-election — and they chronicle how he tried to reach Port Authority officials in a vain effort to eliminate the paralyzing gridlock that overwhelmed his town of 35,000, which sits in the shadow of the world’s busiest bridge.

The documents obtained by The Record raise serious doubts about months of claims by the Christie administration that the September closures of local access lanes to the George Washington Bridge were part of a traffic study initiated solely by the Port Authority. Instead, they show that one of the governor’s top aides was deeply involved in the decision to choke off the borough’s access to the bridge, and they provide the strongest indication yet that it was part of a politically-motivated vendetta—a notion that Christie has publicly denied.

The lanes were closed off for several days without prior notice, causing the traffic backups until the closures were reversed by Port Authority officials on the NY side.  The issue had become a source of controversy since.

In December, David Wildstein, one of the other officials mentioned in the documents published Wednesday, resigned over the matter, saying it had become a “distraction.” A second Port Authority official also resigned in December.  Christie conceded at the time that the lane closures had been mishandled but dismissed the notion that the incident was politically motivated.

Twitchy has some comments on the mainstream media perspective.

It has been said before, but it is good that Democrats are finally holding an elected executive responsible for something done by his appointees.

This is an executive leadership problem for Christie, as this was done by his deputy chief of staff. He would have probably turned to this guy to do the internal investigation. The fact that no other staffer took Christie aside and told him he needed to investigate the investigator means that he does not have the correct executive temperament to be President.

How could a staffer in the governor’s office do anything political without the big guy knowing about it? It’s certainly not possible in New Jersey.

Put a fork in him.

Apparently, this has been done in the US Supreme Court where people have not followed correct procedure. It’s probably happened in other places too.

I believe what occurred to be criminal, but I doubt it will get that far. What are the possibilities of personal, civil lawsuits going forward? I think it is high-time elected and appointed officials quit hiding behind taxpayer funded defense and suffer personal loss if found accountable.

I also believe that the sub-title says it all: “Media finally finds something to be outraged about.” This is a much bigger can of worms.

Didn’t one woman die while waiting for EMS to respond?

He sounds just like Obama with that statement. They never know anything.

You should take responsibility, Christie. They are your employees. You might think about hiring some adults.

I don’t like Christie and I think it is God’s mercy that the nasty side of his personality is being exposed. That being said I wonder if the Clinton’s had anything to do with the exposure. I am not voting for Hillary but I don’t mind her taking down the rinos either. Who is the next republican establishment candidate? Sig em Hillary.

After Christie’s antics with Obama, I don’t think conservatives should be defending him.

I think we should specifically use this as an opportunity to point out it should be more unacceptable for the president to do worse.

Long Answer: Obama’s a Democrat, and they don’t have to resign.

It is irrelevant if Christie knew anything or not. Having no idea what your top advisors in the offices across the hall are doing on your behalf is an indictment of leadership that kills any presidential aspirations. The executive branch of the federal government is a wee bit larger than Christie’s set of top advisors.

What is done about this is up to NJ and VA, but this ought to kill any Christie presidential hopes.

After Obama, are standards are extremely low, if we have any at all. I think he’ll still run but it will plague him as, hopefully, Benghazi will plague Hillary.

Expect the “I’m not a quitter like Sarah Palin” strategy from Christie. Perhaps the Democrats will get motorists to file lawsuits the way the Wasilla Project used “activist” leeches to try to bankrupt Palin.

Christie despises Palin and sneers at her every chance he gets. This whole issue and his handling of it shows he is not up to her weight and class as an executive. Can his emails and records withstand the scrutiny gets got?

Palin is the GOP’s best candidate for POTUS. Vetted. Tough. Solid. Will wipe the floor with the Dem candidate.

Christie’s statement was interesting as a almost perfect recitation of a Pres. ScamWOW release after a scandal.

Follow the form used: Hey, who knew?!? I just heard about this myself. I am outraged (see my stompy foot going?). I was misled/clueless/asleep/playing golf. This is without my knowledge, and likely came out of some office in Cincinnati…

Christie is taking a page out of Obama’s play book. The next page says, “You don’t have to resign. Just brass it out and they can’t touch you.”

But because of the R associated with his name, Christie does not have the same fanatical protection from the media. If they can dig up more dirt before this controversy fades, he may be in trouble.

And when it comes time to run for president, he’ll take a page out of the Clinton book. If this little scandal comes up it will be dismissed as old news and nothing but a political hatchet job.

Again, without some follow-on scandal to boost the outrage, it is likely he will believe he can survive it.

I’d just like to say that I find the comments on this thread to be really excellent. Thanks.

There IS a press in America still…!!!