BDS takes Oxfam down with it as Scarlett Johansson resigns

BDS takes Oxfam down with it as Scarlett Johansson resigns

The BDS movement has become a danger not just to its enemies, but to its friends.

Scarlett Johhansson has been under attack by the anti-Israel Boycott Divest and Sanction (BDS) movement because she became a “Global Brand Ambassador” for SodaStream, the Israeli company that has factories around the world, including one in the “West Bank.”

See yesterday’s post,  SodaStream wins French court case against boycott group, for more about how SodaStream’s factory has become a model of cooperation, employing over 500 Palestinians on the same terms and conditions as Israelis, and providing a boost for the moribund and corrupt Palestinian economy.

BDS doesn’t care. Palestinians literally are starving to death in Syria, yet BDS is obsessed with SodaStream. Even supporters of the anti-Israel group Anonymous saw the absurdity:

As readers know, BDS is not about supporting Palestinians, it’s about hating Israel’s existence.

Johansson also has been a global ambassador for Oxfam International.  Oxfam has an image of a neutral, non-political humanitarian organization that only cares about feeding the poor and improving living conditions.

That’s a false image.  Oxfam is a BDS supporter as to the disputed West Bank, you just didn’t know it.  BDS started harassing Oxfam demanding it cut its ties to Johansson.  When Oxfam announced that it was reviewing her role, Johansson beat them to the punch and resigned last night.

Johansson didn’t just resign, though, she unmasked Oxfam’s support for BDS as incompatible with growing peaceful relations between Israelis and Palestinians, as AP reported:

Scarlett Johansson is ending her relationship with a humanitarian group after being criticized over her support for an Israeli company that operates in the West Bank.

A statement released by Johansson’s spokesman Wednesday said the 29-year-old actress has “a fundamental difference of opinion” with Oxfam International because the humanitarian group opposes all trade from Israeli settlements, saying they are illegal and deny Palestinian rights.

“Scarlett Johansson has respectfully decided to end her ambassador role with Oxfam after eight years,” the statement said. “She and Oxfam have a fundamental difference of opinion in regards to the boycott, divestment and sanctions movement. She is very proud of her accomplishments and fundraising efforts during her tenure with Oxfam.” ….

SodaStream has come under fire from pro-Palestinian activists for maintaining a large factory in an Israeli settlement in the West Bank, a territory captured by Israel in 1967 and claimed by the Palestinians.

In response to the criticism, Johansson said last week she was a “supporter of economic cooperation and social interaction between a democratic Israel and Palestine.”

Oxfam took issue with Johansson, noting it was “considering the implications of her new statement and what it means for Ms. Johansson’s role as an Oxfam global ambassador.”

Oxfam “accepted” her resignation (as if it could reject it), and reaffirmed it’s support for BDS (at least with regard to settlements) based on the false accusation that Israeli settlements are “illegal” and that SodaStream’s factory makes condidtions worse for Palestinians:

Oxfam has accepted Scarlett Johansson’s decision to step down after eight years as a Global Ambassador and we are grateful for her many contributions.

While Oxfam respects the independence of our ambassadors, Ms Johansson’s role promoting the company SodaStream is incompatible with her role as an Oxfam Global Ambassador.

Oxfam believes that businesses, such as SodaStream, that operate in settlements further the ongoing poverty and denial of rights of the Palestinian communities that we work to support. Oxfam is opposed to all trade from Israeli settlements, which are illegal under international law.

Ms Johansson has worked with Oxfam since 2005 and in 2007 became a Global Ambassador, helping to highlight the impact of natural disasters and raise funds to save lives and fight poverty.

Now the BDS supporters who demanded that Oxfam fire Johansson are bemoaning that she resigned. What they wanted was for her to quit SodaStream, and it backfired: 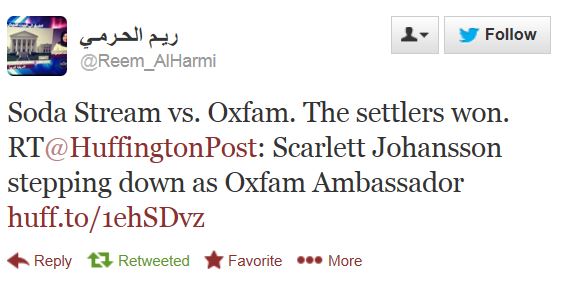 The anti-Israel website Mondoweiss is almost apoplectic, Scarlett Johansson not only abandons Oxfam but throws it under the bus:

With this statement, Johansson and her public relations team not only extricate her from a vulnerable position, but does so cynically and opportunistically by throwing Oxfam under the bus.

The statement claims that Johansson left Oxfam over “a fundamental difference of opinion in regards to the boycott, divestment and sanctions movement [BDS]”—an unconvincing assertion since Oxfam has never taken a position on BDS.

However, by making this allegation, Johansson frames her departure as a result of Oxfam forcing her to make a different and presumably more difficult decision. That is, instead of being asked not to represent a company that manufactures products from an illegal West Bank settlement, Johansson implies that she was being forced by Oxfam to honor the Palestinian BDS call.

The lesson here is not just about Johansson steadfastness, or even how international aid organizations have become politicized.

This is a BDS story, a story of how a hateful movement is willing to take everyone down with it.  BDS has no concern for the 500 Palestinians families who would have lost their primary sources of income, the thousands of Palestians starving to death in Syria, or the damage to Oxfam from BDS pressure tactics.

The BDS movement has become a danger not just to its enemies, but to its friends.

It’s a nice change for me, being able to support a Hollywood star. Looking forward to her next film, when I will go out and spend a few dollars to see it.

That was my reaction as well. I have a newfound respect for Johansson; and politics may not sabotage yet another movie going experience. Well, that remains to be seen. I have observed the insidious maneuvers that directors, writers, et al take in order to further their agendas. I will never watch “Dirty Dancing”. Never again!

I just added her to my very short list of “Stars whose films I do not download” on the Internet.

To me, downloading current films for free out of the depths of the web, isn’t about money; it’s about not giving Hollywood Leftists cash with which to trash me and the rest of us folks out here in FlyOverLand. Call it “economic warfare”…

Why do these fools hate international law? Wars have consequences.

Yes, and to illustrate that point we only need to reverse the situation: can one imagine what the BSD people said if (for example) the Palestinians had won a war and held part of the Negev desert, and Israel was demanding (without offering any concessions of its own) that the Palestinians return it?

We know the answer to that one.

Same thing they say about the murder of a baby girl in her crib by Arab Muslims?

There are few bright lights in Hollywood and Scarlett is one of them.

BDS and its supporters are trying to burn those bridges.

No, wait. They are trying to BLOW those bridges.

There is nothing which could make me angry with Scarlett Johansson.

I could stand to see more of her.

Heh! I see what you did there…

Happily, there are a few…and I do mean a few…non-idiots in Hollywood.

“supporter of economic cooperation and social interaction between a democratic Israel and Palestine.”
That’s her problem,”Palestine” is a fictitious country. If it was real it might actually have rights.

Her publicist is Marcel Mariseau ([email protected]). Send him a note expressing thanks and support for what Scarlett is doing. It takes some cojones to stand up in Hollywood, there are already ugly things going around – let’s counteract them!

Thank you for posting the address. I wrote.

Hmm… color me cynical. Who do you think pays more for her support, Oxfam or SodaStream? Before y’all start showering her with praise, remember she’s a HUGE Obama supporter.

Yea, I give her props for doing the right thing here, but she’s still a huge libtard, lets not pretend she’s on our side.

That may be, but it’s not the dynamic working here. As an Obama voter, one would have expected her to dump Israel, but she didn’t. He’s wrong about “Palestine”, of course, but it’s more thán a money thing. She stands to lies a lot of cred and money by dumping the BDS gang. She didn’t do this for money

I meant to say lose cred with the Hollywood set.

Yes, an Obama supporter, but this time she is taking the opposing side. I’ll give her credit for that. Obama would not be supporting her on this issue.

Jobs and wages cause poverty… gotcha.

All these entertainers love to talk about how brave they are for supporting gay rights and homosexual marriage and AIDS research and abortion and gun control and yada yada yada. That’s not bravery! Everyone they work with holds exactly the same opinion! How brave is it to always take the position which all the most powerful people in Hollywood agree with? It isn’t! That’s the easiest, most spineless and gutless thing one can do.

Star- “Oh, yes, well I’m wearing this ribbon today to show support for gay marriage. I really feel we should all try to be more tolerant of people’s differences. Love is Love, you know.”

Host- “Wow, that’s so brave of you! You’re such a radical non-conformist!”

But this? Saying you support Israel instead of the Palestinians? In Hollywood? That takes balls in her line of work. You watch. Critics who loved her before will start panning her performances. Entertainment Tonight will no longer mention her unless it’s about some embarrassing breakup or traffic ticket. She actually risks being blackballed by her industry. So, good for her!

[She’s still a moron for voting for Obama and supporting Obamacare but this shows promise at least.]

I am happy to say that I have always thought Oxfam to be political wings . They made an immense jump from British charity thing with thrift stores to inter national campaigners in a very short time .

All NGOs should be viewed without rose coloured glasses .

Had she dumped Sodastream what company would ever ask her to be the face and voice of their product? She’s young, beautiful and thinking long term.