Woman falls off pier while browsing Facebook on cell phone

Woman falls off pier while browsing Facebook on cell phone 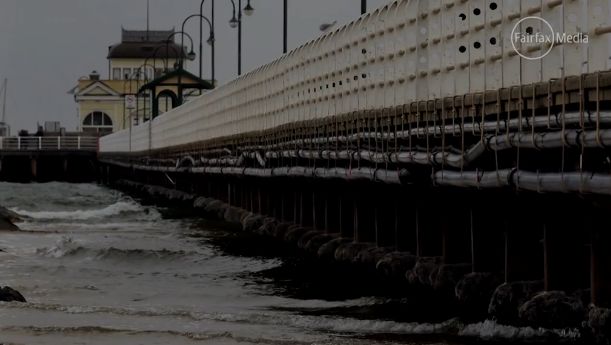 A tourist in Australia was rescued after falling off a pier and into the Port Phillip Bay while she was browsing Facebook on her cell phone.

A Taiwanese tourist had to be rescued after accidentally walking off a pier in the Australian city of Melbourne while checking her Facebook page.

Police were alerted to the incident by a witness and rescued her in a speedboat after about 20 minutes.

The woman, who apologised, was taken to hospital for observation but police said she was fine.

In an interview posted at The Age, Kelly described that he and the other officers arrived by boat and found the woman floating on her back in the water about 30 meters from the pier.

‘‘She wasn’t splashing around too much. She wasn’t in a panic even though she was in the water for probably 20 minutes,’’ Kelly said.

He also indicated how police found out what had distracted the woman.

‘‘She had a mobile phone in one of her hands and when we brought her onboard one of the first things she did was apologise and say sorry,’’ Senior Constable Kelly said.

‘‘She explained that she was on her phone checking her Facebook page when she fell into the water.’’

In 2012, a woman here in the U.S. tripped and fell into Lake Michigan after becoming distracted because she was texting while walking on a pier.

“Distracted walking” is apparently a growing issue.  Earlier this year, an Ohio State University study showed that injuries were on the rise for pedestrians walking while using their cell phones.

I work with dogs, am out much of the day walking streets and see this constantly. Not long ago I yelled at a young woman crossing an intersection with a car coming; she was punching text on her whatever and had ear buds listening to music I guess. She looked up, Huh? What? Never acknowledged me. People walking straight at me looking down. I now just stop, turn sideways and let them collide with me. The other day I was at intersection and noticed two cops with guns drawn approaching a building. No one saw this! People were walking right past it, heads bent down to some tiny screen.

It’s what every big predator on the savanna dreams of.

…or a Great White!

what a waste of taxpayer money. any takers on whether stuff like this has happened to her before?

Since she survived she ‘s not in contention for a Darwin Award !

I wonder how many ‘bars’ she got down there ?

And how many she had been to ?

. She probably had been on the Ferris wheel . Koreans are always screaming out with their miss kitty handbags up there even though it is only 50′ high but it is special Art Deco.

If you are going to walk off a pier this one is the one to do it off .

No need to waste a single taxpayer penny on regulations, warning signs, or PSA campaigns on the dangers of cell phone distraction. Natural selection will solve the problem in due course.

20 minutes to get rescued? She couldn’t make it to shore in 20 minutes on her own?
Here is the pier: http://parkweb.vic.gov.au/explore/bays-rivers-and-ports/st-kilda-pier-and-breakwater

C’mon people. There is no excuse for this sort of crap.