Have we reached the point where we lack self control so much that we need to advertise to drivers where they can pull off the road to text?  Apparently so, in New York. 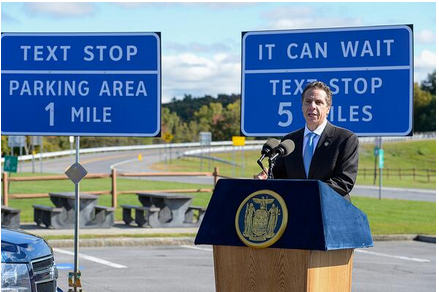 Gov. Andrew Cuomo today announced dozens of “texting zones” along New York’s major roadways to remind drivers to pull over before answering texts or emails on their smart phones.

The 91 zones — many of which are existing pull-off and park-n-ride areas — will be newly advertised with bright blue signs to remind drivers to wait until the next safe pull-over area. The signs will also show how many miles ahead the next zone is.

“These zones will be identified with signs along the Thruway and state highways, reminding drivers that there is a nearby opportunity for them to legally and safely use their phone,” Cuomo said in a news release. “With this new effort, we are sending a clear message to drivers that there is no excuse to take your hands off the wheel and eyes off the road because your text can wait until the next Texting Zone.”

New York has passed strict laws in an attempt to curb cell phone use while driving.  The state’s Department of Motor Vehicles has published $150 fines and driver violation points for those caught texting/calling and driving.  And younger drivers with a learner’s permit or probationary license can face suspension of their permit or license for 60 days on the first offense.

I’ll be the first to admit, drivers on their cell phones annoy the heck out of me.  But if there’s one thing I know about people who can’t hold out a few more miles to send a text or make a call or check their Twitter and Facebook feeds, those giant blue signs aren’t likely to make them wait.  (I’m not sure how much tickets really deter them either, to be honest – who knows, maybe I’m wrong). As much as some might lack the self control, I think they were fully capable of figuring out that many of the already existing giant blue “Rest Stop Here” signs or other general observations along the roadway might indicate that’s a better place to stop and use their cell phones than doing so while driving a vehicle.

But hey, maybe we’ll run into Anthony Weiner at a text stop.

Funny how they understand that people aren’t obeying the laws against texting (for whatever reason) but they can’t seem to get the idea that passing laws limiting or banning weapons won’t work either.

Liberals; minds that are a terrible waste.

I’m guessing that putting up signs to better identify the distance to rest areas that are needed by travelers for multiple reasons wouldn’t have been as “eye catching”? Texting while driving annoys me, but folks doing the “potty dance” are much more dangerous and distracted!

Personally, it really annoys me to be looking for a rest area and not know whether it’s 5 miles or 50 miles ahead.

The actual research shows phoning/texting while driving is no more distracting than eating. Although both are dangerous, neither is nearly as risky as driving under the influence of intoxicants or when too tired.

You cannot be serious. According to you, taking your eyes off the road and REFOCUSING them to a shorter target distance (while depending SOLELY on peripheral vision to notice impeding conflicts) is no more dangerous than driving after a couple of drinks. Well, no offense but there are thousands of alcoholics out there who drive every day with more than two drinks in their systems and they do it without crashing or getting stopped. I assume that there’s a bunch of pot smokers who do the same.

So I respectfully disagree.

I’m hoping these designated zones are also the only places on the highways you can put on your make-up, eat fast food, or smack your children in the back seat. I probably shouldn’t joke though, that’ll be coming next.

On the upside, muggers now know where to find folks to relieve of their expensive gadgets!

Less than 2% of fatal car accidents are caused by a class of distractions which includes texting. It seems like a misallocation of resources to address a minority issue. They should focus on relaying principles, or perhaps they don’t believe people are capable of deduction to reach specific conclusions. If that is the case, then the problem they should be addressing is located in the education system.

HAHAHAHA… What a filibuster. Cruz is reiterating his father’s algebra lesson. I love this man!

Professor, next time get the feed straight from C-SPAN 2,

Freedom works is F’ing up the works by butting in with their agenda, not letting the Senator speak.

The above comment was intended for the live Ted Cruz speech thread. My apologies.

No worries. I’m texting while I’m driving so it’s okay.

Well, I guess it’s better than doing nothing but I’m all in favor of a complete ban on texting while driving.

Great idea: Because the problem all along was that people were unable to find a corner gas station or McDonalds to stop in and text.

Yeah, this will really curb the texting!

How long before someone sues the state for getting carjacked in one of these stops because they were following the law and pulling over to text?

A 9mm solves that problem.