Which is scarier video: “Like Your Senator” or “Sacrilize Sperm”?

Which is scarier video: “Like Your Senator” or “Sacrilize Sperm”? 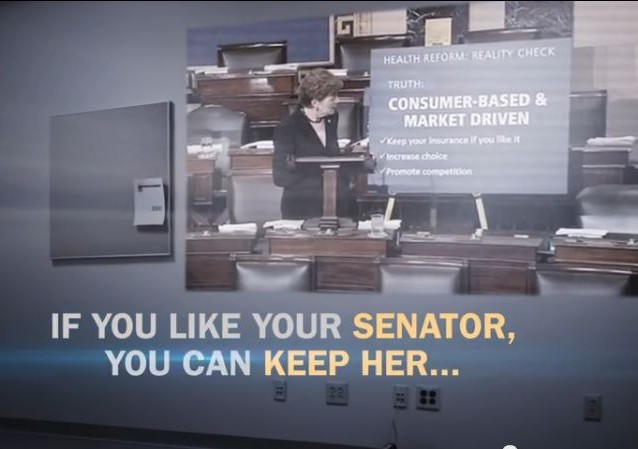 2014 may come down to which side makes the scarier videos.

Chris Cillizza at The Washington Post says This is the ad every Democrat should be scared of in 2014.

Aleister says This Is The Ad Every Republican Should Run In 2014.

I say the response will be: War On Women!

Someone actually said this: “They do not want poor women to have joy” and “they want to sacrilize sperm”:

Which do you think will be more effective?

Didn’t you also think The Life of Julia was stupid? Julia worked out just fine for Democrats, so don’t underestimate the War on Women scary videos to come.

Only people who receive “sexual education” would deny the terms and circumstances of human evolution. It’s not about sperm or even eggs. It’s about human evolution from conception to death. Elective abortion is the premeditated murder of a human life, which denies our unalienable right to life, without cause or due process. Its normalization represents a violation of human rights on an unprecedented scale. This is where the human and civil rights campaigns should begin. Since they don’t, the motives of advocates and activists is not only suspect but can be classified as simple deceptions, or perhaps an outright fraud, since they profit politically, fiscally, and socially from its maintenance.

That said, I think it would be preferable to redistribute tax money in order to purchase condoms for Julia, her boyfriend, and others who demonstrate an inability to accept responsibility for their personal pleasure, rather than normalize an action which violates the most basic human right to life. Furthermore, it is imperative that sexual education be replaced with biology education. The former is ostensibly responsible for the confusion suffered by boys and girls, and men and women, about the basic nature of sexually reproducing lifeforms, as well as the immorality of degrading a human life to a commodity, interchangeable and disposable.

Pretty much EVERYBODY…with a few brainless exceptions…knows they have been lied to by Pres. ScamWOW and his myrmidons in the Congress.

Oh, and ladies can avoid that “dangerous sperm” with an aspirin.

NOBODY can totally avoid ObamaDoggle.

(Refusing to comply takes you close, however!)

This is what we know about human evolution. It begins at conception and continues until death, whether naturally or artificially induced. Elective abortion is the termination of a human life by artificial means when it has neither voice nor arms to protest its impending death.

Let’s continue this discussion by naming the new human life “Barack”. Barack begins his evolution at conception, and, barring a natural or artificial infraction, will emerge from his mother’s womb approximately 9 months later. He is still not viable and requires extensive care and oversight to continue his evolution. For another decade or so, he will remain marginally viable.

Now, the question is when does Barack acquire value? When is Barack endowed with the inalienable right to life? When is it justified to abort Barack, for money, sex, ego, convenience, etc.? Is Barack a product of spontaneous conception, which is established at will by his mother, father, or a Planned Parenthood counselor? Will Barack remain a commodity throughout his evolution; that is to say will he be disposable and interchangeable with other commodities (e.g. Al, Jesse) of similar kind?

Perhaps these are not easy questions to answer, but it seems important enough that we do not simply dismiss them with a flippant remark such as “women’s right”, “war on women”, etc. The democratic leverage may shift and we may be left vulnerable to the whims of a progressive morality. Perhaps that has already transpired to a historical degree. We need to discuss life and death issues now and not delegate them to a future generation or Dodo’s end.

With “sacrilize sperm”, they are trying to set the terms of the argument. Then we get the “no exception for rape” guys that skewer campaigns nationwide. The battle should not be fought on their (early) terms, but rather on the widely disdained later term abortions.

The late term aborters like Gosnell were (are) hidden and protected by the left. THAT is where the political war should be fought, as I see it. Anyone that gets their dander up arguing “abortion (pre-20 weeks) should be treated as murder”, is hurting the cause, as I see it.

Make the aborters defend later term, then argue, decisions should be made by states, decentralizing power. When the louder mouth “Christian” involves his ego and starts demanding laws to outlaw any abortion because “life starts at conception”, they lose voters and momentum.

The debate/war is not on when conception occurs, but on what laws the general populace is willing to have imposed on them, or to impose on their neighbor with different beliefs. The messaging sent with chants about “life begins at conception” is “we know better than you and will force you into our belief system”, (like Barack is doing to us now).

“We want all abortion treated as murder you stupid unbelievers, like Chile”. That is not pragmatic, but only strokes the ego of those trying to outdo their fellow “Christian” on how brave they are for their bold stand. It is political suicide (see Missouri senate race 2012). It casts the loud Christian directly in the “sacrilizer of sperm” trap. We are dealing with the brainwashed, low info voters yes, BUT also educated people that vehemently don’t want to charge early abortions as murder.

Keep the focus on the Gosnellites. Quit arguing “life begins at conception”, (i.e., we will fight to the death to make any abortion illegal), acknowledge the law of the land, and fight the injustices of late term, MAYBE pushing for 20 weeks.

For the absolutists willing to lose elections based on their “principled stand”, things are never so absolute. OT laws as I understand did not always treat the loss of an unborn child as murder. And life does not begin at conception. Life began with God…. then the Bible tells us he gave breath to the first man … Adam. Since then all life is passed on through seed.

So some churches even taught that the twinkle in the Father’s eye was not to be “aborted” by any contraceptive means. God actually killed Onan for “spilling his seed on the ground” rather than impregnating his brother’s wife. But even the fundamentalists seem willing to ignore parts of the Bible they don’t like.

The general zeitgeist in the US is that these “crazy Christians” would take us back to forcing women to have children, or taking away contraception (“war on women” has been effective).

We have to recognize that people know what conception is, but they generally don’t agree our constitution applies equally to those “early humans”. Arguing that some rights begin at 20 weeks might be a winner, but arguing you eventually want a week one fetus treated as a full citizen because “life begins at conception you idiots” … is a sure loser.

Compulsory pregnancy? Denial of joy to “strong women”?. The dishonesty is truly breathtaking.

It has to be dishonesty, otherwise those women are simply insane. (The logical part of my brain says they can’t possibly believe what they said.)

(I notice that whenever I type “Obamacare”, the computer tries to correct the spelling–separating the owner (Obama) from the alleged care; putting in a hyphen, as though Obama has someone like the media distancing Obama from his creation; or substituting the word “Macabre.” Actually, spell check is right: Obamacare is Macabre….)

“It takes a lot for me to get pissed at leftists; this is one of those times: ‘Leftist Character Assassins Now Remorseful Over Destruction of Mitt Romney’.”

Low-income women and their partners together are being “denied access to birth control” if they don’t get the 50-cent condom or the $20/mo. birth control pills paid for by Medicaid?

Seriously? Maybe if they can’t afford to chip in 25 cents each, they should reconsider their budgets… forego having a drink on their dates… or skip a manicure.

Cuccinelli got beaten by McAuliffe for VA Gov by 42! points in the “single woman” demographic. He actually won “married women” by about 6.

Expect the Dems to run on abortion, lies about R’s taking away ‘contraception’, and the ‘war on women’ nonsense for the foreseeable future.

I thought Julia changed her name to Sandra Fluke …