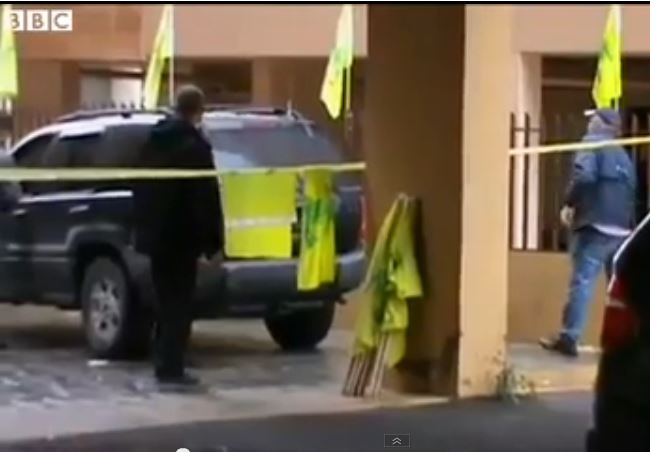 Just one day after Hezbollah chief Hassan Nasrallah gave a gloating television interview about the triumph of the Iranian nuclear deal, the former head of Hezbollah’s rocket forces, someone involved in procuring arms from Iran, and a close associate of Nasrallah was assassinated outside his home in Beirut.

A statement released by Hezbollah said Hassan al-Laqis was killed near his house in Beirut as he was coming home from work.

Laqis was at one point one of the main commanders of Hezbollah’s rocket division, which fired hundreds of missiles at Israel. According to reports in the Lebanese media, Israel tried to assassinate him during the 2006 Second Lebanon War and failed.

A statement released by Hezbollah said Hassan al-Laqis was killed near his house in Beirut as he was coming home from work.

Laqis was at one point one of the main commanders of Hezbollah’s rocket division, which fired hundreds of missiles at Israel. According to reports in the Lebanese media, Israel tried to assassinate him during the 2006 Second Lebanon War and failed.

“Israel has nothing to do with this incident,” Palmor said. “These automatic accusations are an innate reflex with Hezbollah. They don’t need evidence, they don’t need facts, they just blame anything on Israel.”

The commander was shot five times in the head and neck, the Lebanese Daily Star newspaper reported, citing an unidentified security official. Hezbollah said Laqees had spent his life serving the “resistance” against Israel and lost a son during the group’s 2006 war with Israel. He was previously the target of several failed assassination attempts, it said.

In a tweet, the group hailed the assassination of “a commander in the Satan party [Hezbollah] Hassan Lakkis.”

Updates: More on al-Laqui, from Haaretz:

Laqis was an elite member of Hezbollah’s military wing and for many years served as Hezbollah’s technology and arms chief. He also maintained extensive contact with Iranian and Syrian intelligence. He was known to Western intelligence since the 1980s and was considered very knowledgeable of the secrets of Hezbollah’s operations.

From The Daily Star of Lebanon:

“Lakkis was involved in scientific development and played a key role in developing Hezbollah’s unmanned aerial vehicles program,” a source close to the Lebanese group told The Daily Star on condition of anonymity

A security source, who also spoke on condition of anonymity, said Lakkis was also in charge of smuggling arms to Gaza and Egypt.

It’s probably just a coincidence, but today was the anniversary of the release of American hostage Terry Anderson on December 4, 1991, after being held for years by Hezbollah:

Is it wrong to be pleased by the death of someone that I didn’t know existed before today? If so, i don’t want to be right.

I think this falls in the same category as shopping and finding something you didn’t even know existed that you can’t live without.

That is exactly how I found my Starship Enterprise pizza cutter:

You’re a saint compared to me. My first thought was, I wish Israel would do this — a lot.

But then I guess that would begin a vicious cycle that would cost a lot of innocent lives — Hezbollah likes to go after civilians.

I had a flash of deja vu reading that Times of Israel excerpt.

“A statement released by Hezbollah said Hassan al-Laqis was killed near his house in Beirut as he was coming home from work.”

In this funny episode, the missus cleans up the mess in the boys’ bathroom as Dad gently explains to his mischievous son why dearly departed Spot wasn’t an infidel. Hilarity ensues when Dad has to explain why part of taking good care of a family pet includes not beheading it.

Update: “Martyred #Hezbollah commander Hassaan Lakkis, and his son who was martyred in July 2006 war with israel.”

I told you. Leave it to Beaver.

People are the same all over the world.

I guess this story confirms what we’ve been told for decades…nuclear power kills people.

This is why fat boy Sayyed Hassan Nasrallah, supreme leader of Hezbollah, never leaves Damascus. He’s afraid of his own shadow. Fearless Leader always talks to the faithful by video (I suppose he’s a master at Skype).

Of course he’s right to be afraid. I have no doubt that the Israelis would paint him with a laser targeting device in a New York minute if they could.

“Martyrdom for thee but not for me.”

I hope the Israelis did it.

May you turn on a spit in Hell for Eternity.