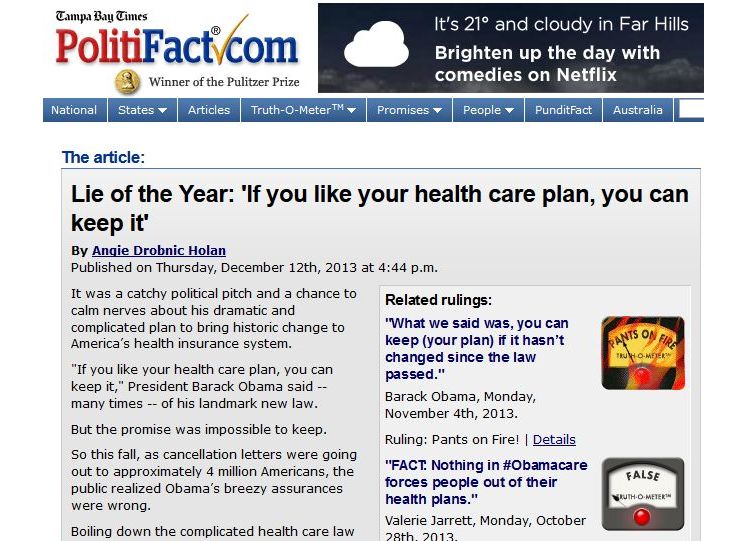 President Obama’s “If you like your health care plan, you can keep it” promise was yesterday declared the “lie of the year” by Politifact.

It was a catchy political pitch and a chance to calm nerves about his dramatic and complicated plan to bring historic change to America’s health insurance system.

“If you like your health care plan, you can keep it,” President Barack Obama said — many times — of his landmark new law.

But the promise was impossible to keep.

So this fall, as cancellation letters were going out to approximately 4 million Americans, the public realized Obama’s breezy assurances were wrong.

Boiling down the complicated health care law to a soundbite proved treacherous, even for its promoter-in-chief.  Obama and his team made matters worse, suggesting they had been misunderstood all along. The stunning political uproar led to this: a rare presidential apology.

For all of these reasons, PolitiFact has named “If you like your health care plan, you can keep it,” the Lie of the Year for 2013. Readers in a separate online poll overwhelmingly agreed with the choice.

While it’s great to see Politifact acknowledging what many others have warned about for quite some time, it wasn’t always as critical of the same or similar claims. Lachlan Markay pointed this out:

That’s been one of the challenges with Politifact: sometimes it gets things right, sometimes not so much. And eventually they got this one right, but it was an interesting path in finally getting there.

First they came for the Nazis and I did nothing….

Yay! This one is great, thanks for posting.

I love those Hitler videos!

This is one of the better ones

Must have been a difficult decision. So many to choose from.

Politifact is a Democratic operation with the veneer of bipartisanship. They will avoid hurting the President whenever possible, but sometimes the cost to their credibility to defend him this time would destroy their ability to shill for Democrats in the future.

PolitiFact is a wholly owned subsidiary of the Tampa Sun-Times, a liberal rag. Their competitor, the Tampa Tribune, was owned by Media General (and may still be) and was always the bigger and more conservative newspaper in the market. But Florida has always had the Snowbird problem of Northeastern Democrats who move down for the benefits of good weather and conservative governance but then vote for the same liberal crap they left behind up north. The Sun-Times serves them.

PolitiFact was never designed to find the truth any more than the “Clinton Truth Squads” were in the ’90s: their job is in fact quite the opposite, to find a way to spin for Democrats.

That they gave up on this one, which they used to defend adamantly against all facts and CBO reports, just shows Obama is going down the tubes fast.

Only it wasn’t a “promise impossible to keep.” It was a willful, malicious lie. Politifact can go to hell.

BIGGEST LIE of the Century….

Actually the Lie-of-the-Year was Politi’fact’ not declaring Obama’s statement a lie BEFORE the 2012 election cycle. THAT was the LIE OF THE YEAR.