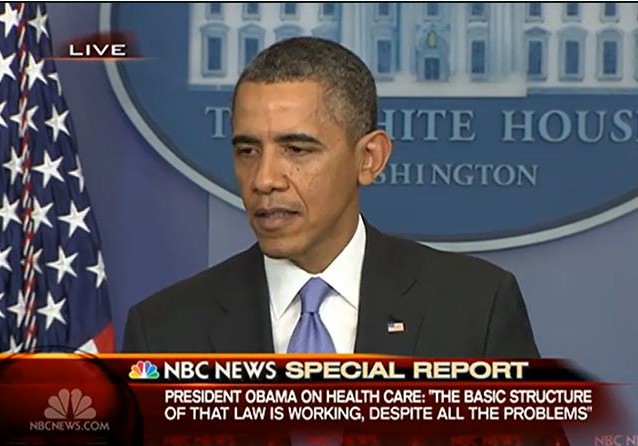 That’s the take away from today’s press conference, which still is in progress as of this writing.

Obama on Obamacare: 'The demand is there and…the product is good.'

Reporters are primarily interested to hear how Obama, their Messiah, will beat the Republicans, given his Dramatic Challenges.

Attention Democratic voters: Pull the lever for the Repubs, just this once.

Well, the truth is that Obamacare is in fact working,

IF your objective was to subjugate and bring to heel the
American people. The objective of this person and the Democrat Party is to convert us from citizens to be respected to being subjects to be ruled. In that context Obamacare is working.

Republican candidates should ask their Democrat opponent why they aren’t inviting the President to campaign with them. As often as possible.

INVITE Pres. ScamWOW to the state to hold a presser with the Deemocrat candidate.

The young are not signing up.
The slothful and deadbeats will still wait until they really need it (no waiting periods, so why hurry).

I doubt even he believes it, but he’s stuck on stupid, like a broken record. There’s more [email protected] coming out of his orifice than somebody suffering from food poisoning.

No, Zero, Obozocare doesn’t “work,” as most people define and understand the concept. For every “success story” you pull out of your arse, there are hundreds, if not thousands, more who have lost coverage.

Wish the “reporters” would exert a little effort to report the news instead of acting like moonstruck teenyboppers who sleep with Zero’s picture under their pillow every night.

Weak. Without energy. Wanting to get out of town.

And ObamaDoggle is “working” like the great, powerful engines of the Titanic were working.

“Other than that, Capt. Smith, the voyage went perfectly!”

Have the number of sign ups to actual health insurance (not welfare) exceeded the number of previously privately-insured individuals who lost their insurance thanks to Obamacare? It’s really only after we break even on that, that we can start counting numbers insured above and beyond that as “success stories”.

No those would not break even…they would be cooked because just like every other cooked dataset from the WH they would include medicaid enrollment numbers as some perverted tradeoff success for indivudals being responsible for their own health care.

The Republican party really needs to make it clear to the MSM that access to the next, Republican President will be limited to those media organizations that cover the President objectively now. Ditto for Republican congressional delegation coverage.

Excellent idea, however that would require the Republicans to grow a pair and we all know that will never happen

Each new day seems to bring another ad hoc exemption designed to control the next 24 hours’ news cycle. None of these exemptions were ever authorized by Congress, nor do they seem to adhere to the Administrative Procedures Act. How likely is it that these arbitrary exemptions can pass scrutiny on due process grounds? At some point so many exemptions will be issued that the handful of slobs who get stuck having to follow the law as written would seem to have an excellent case on Equal Protection grounds.

As much as I hate listening to Obama run on and on about how great his administration is, sometimes interesting little nuggets seem to sneak out accidentally but are often missed by the press looking for that “big” sound bite. Today Obama basically admitted that he only met with ‘folks’ about ACA every 2-3 weeks.

“Well, there’s no doubt that — that when it — when it came to the health care rollout, even though I was meeting every other week or every three weeks with folks and emphasizing how important it was that consumers had a good experience, an easy experience in getting the information they need and knowing what the choices and options were for them to be able to get high-quality, affordable health care, the fact is it didn’t happen in the first month, the first six weeks, in a way that was at all acceptable.”

Back leading up to the launch of his major legacy program and he meets with “folks” every 2 to 3 weeks?? Is this a max of 5-6 meetings with the ‘folks’ in the 3 months prior to launch? I wonder how many fund-raising stops he made during those 3 months.

At least CNN’s correspondent decided to take a risk and press Obama on a tough question.

Wasn’t any of these tempests in teapots like ACA glitches or NSA spying or Iranian nukes, either. A probing question reflecting the true concerns of the American public at this critical time.

Zucker wants to talk to Jay Leno about coming to CNN. Makes sense to shift the emphasis to “infotainment,” which is what they already do, except for providing the information or entertainment.

Obama is a fool and there is nothing more foolish than a fool.

Those who believe in him are fools, but he is not.

He is an evil, narcissistic prick that’s screwing America and Americans, including the fools that believe in him.

“Policy experts Sean Parnell and Timothy Jost have noted a loophole in the law that could attract millions of young adults—and others as well—who seek inexpensive insurance.”

Escape from Obamacare
How to get health insurance while avoiding the exchanges.
http://www.weeklystandard.com/…